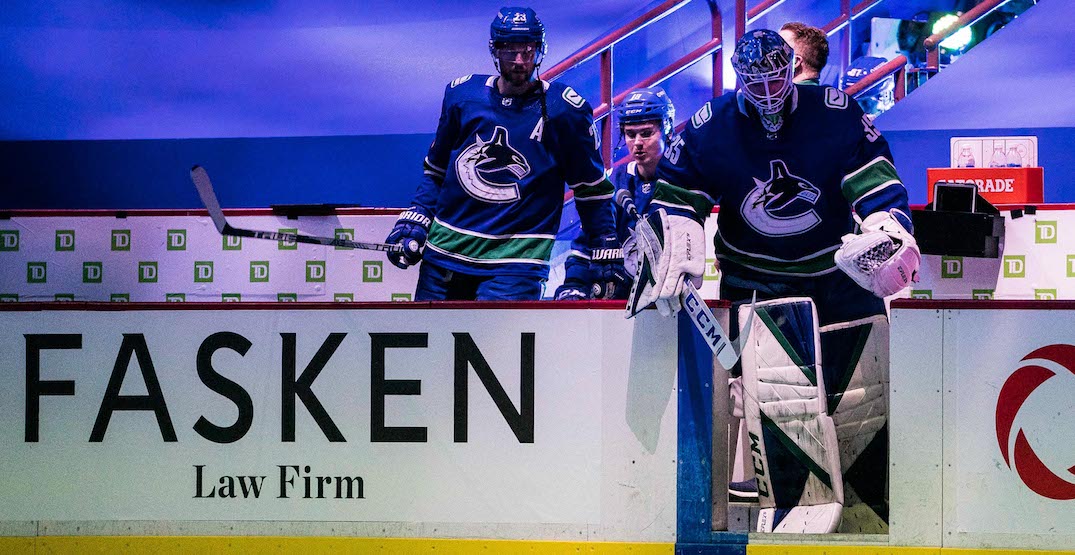 The Vancouver Canucks are about to play the toughest, strangest, and cruelest stretches of hockey in NHL history.

And that’s saying something considering that the Canucks have endured their fair share of hardships over the last 51 years. The Canucks have yet to hold a full practice since their COVID outbreak, but somehow will be suiting up for the first time in weeks for the first of 19 games in 31 days to end the season.

While the team’s playoff chances are slim to none, there are definitely some storylines to follow as the season reaches the conclusion. Here are seven that you should keep your eye on.

1. How will the team recover from COVID?

Vancouver had not only the worst COVID outbreak in the NHL, but one of the worst in pro sports.

The Dallas Stars, Buffalo Sabres, and New Jersey Devils were three of the teams that were hit hardest by COVID-19. The Stars actually won four straight after 17 positive cases forced them to start the season a week late. The Devils won their first two before losing 12 of their next 14 after a two-week layoff.

Buffalo lost 20 of their next 22 games after COVID knocked out almost half of their team. Based on Vancouver’s schedule and the fact that they were rocked harder than any other teams, it’s easy to envision a similarly nightmarish scenario down the stretch drive.

2. How will Pettersson recover from his long layoff?

Elias Pettersson played his last game on March 2, so this has been the longest regular-season layoff of his young NHL career.

After a slow start to the season, Pettersson started to find his game. He was on a hot streak prior to exiting the line-up, with five goals and seven points in his last five games.

Benning mentioned during his media availability earlier this week that Pettersson is skating again, and will meet with a specialist this week. He remains hopeful that Pettersson will play shortly after the Canucks return to action.

3. Which young guys will get an opportunity?

With Jordie Benn and Adam Gaudette shipped out at the trade deadline, the door has opened up for some younger players to get a shot.

Benning mentioned on Monday that one direct beneficiary from the deadline fallout is Olli Juolevi. The 22-year-old Finn has played 15 games this season in sheltered minutes, but he’s been a healthy scratch in the Canucks last 14 games. He should reclaim his spot alongside Tyler Myers on the third pair.

A possible beneficiary of the Gaudette trade could be Kole Lind. The 33rd overall pick from 2017 is sitting on the Canucks taxi squad after returning to Vancouver from Utica to recover from injury. He has yet to play an NHL game, but he does have five goals and eight points in eight games for the Utica Comets.

Other notable prospects who could get a shot include Brogan Rafferty and goaltender Mike DiPietro.

4. Can Holtby play his way back into form?

One of the most disappointing Canucks this season has been Braden Holtby. After beginning the season as the team’s starter against the Edmonton Oilers, Holtby has become a distant afterthought with the emergence of Thatcher Demko.

However, Holtby should get some more playing time with the Canucks set to endure a brutal schedule.

Can Holtby improve upon his ghastly numbers? That will be something to watch because from a salary cap standpoint, it would be beneficial for the Canucks to offload Holtby’s salary in the offseason.

It likely won’t happen, but perhaps a strong showing from Holtby in the season’s final stretch could inspire the Seattle Kraken to take him in the expansion draft.

5. Will any members coaching staff re-sign?

One of the biggest storylines throughout this season has been the contract status of head coach Travis Green and goaltending coach Ian Clark.

Both coaches have seemingly been part of the solution in Vancouver, although this season’s performance by the Canucks could have some questioning Green’s worthiness of a costly long-term extension.

According to CapFriendly, Green is in the last year of a deal that pays him $1 million per season. Green can look around the league and see that another first-time coach, David Quinn, got paid $2.4 million per season to coach the Rangers.

Green is likely looking for a hefty raise, but are the Canucks willing to pay it?

As for Clark, he’s considered one of the best goalie coaches in the world, and one of the major reasons for both Jacob Markstrom and Demko’s success. Losing him would surely be a big blow, especially after Demko signed a five-year extension.

6. Are these Alex Edler’s final days as a Canuck?

Whether he plays beyond this season or not, we’re coming closer to seeing the Canucks longest-tenured defenceman end his days in Vancouver.

Could these last 19 games actually be the final stretch though? Edler is in the last year of a deal that pays him $6 million, his play is declining, he has a young family and he’s one of the Canucks who ended up on the COVID protocol list.

Because of his declining play and the fact that he’ll have to take a serious pay cut to return to Vancouver, it’s fair to wonder if Edler might call it quits after this season.

7. Will any free agents earn an extension?

Speaking of free agents, the Canucks have a handful of players looking to earn a contract extension for next season.

On defence, Travis Hamonic remains the biggest wild card aside from Edler. He’s fit in nicely alongside Quinn Hughes after a rough start to the season.

None of those contracts should break the bank, and nor should they with vital contract extensions for Hughes and Pettersson on the horizon.