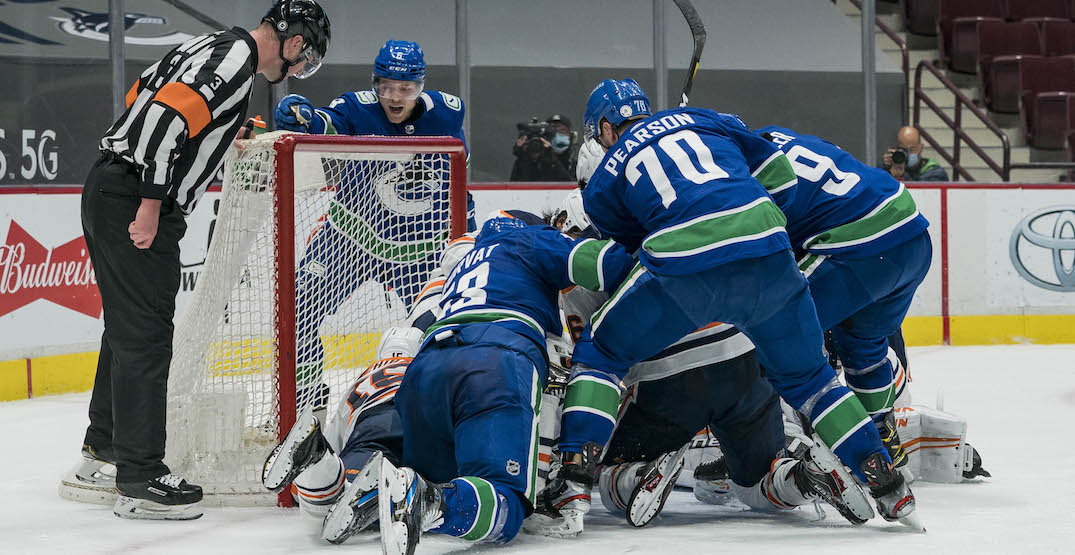 Somehow, some way, the Vancouver Canucks are the hottest team in Canada right now.

Vancouver leads the Canadian division with 10 points in March. Happy #Canucks game day to you.

It may be hard to believe, but with a 5-2-0 record in the month of March, it’s a true statement.

Jim Benning had a brutal offseason, which has been exposed by the Canucks’ play this season.

But at least one move he made looks like the right one: choosing Thatcher Demko over Jacob Markstrom. I called this a couple of weeks ago, and Demko’s play since then has only served to solidify that stance.

Maybe this is just a hot streak, and maybe Markstrom is still the better goalie. But so far, Demko (.917 SV%) has better numbers than Markstrom (.911) this season. Who is the better goalie? I’d like to see more evidence first before declaring that, but the question is at least up for debate.

When does Holtby play again?

Braden Holtby has another new mask, but it remains to be seen when we’ll see it debut.

With six games in the next 10 days, it probably makes sense to spot him in for 1-2 games. Given Demko’s red hot right now, I would suggest riding him in five of the next six.

Demko is starting tonight, so when does Holtby get back in?

Conventional wisdom has Holtby getting one of the back-to-backs against Montreal, but they desperately need to make up ground on the Habs. Would Green be willing to ride Demko for the entire road trip and give the March 22 game to Holtby?

The Canucks appear to have a number of key building blocks to become a Stanley Cup contender, even if it’s still at least two years away. Demko looks like a good No. 1 goalie. Elias Pettersson and Bo Horvat are a good one-two punch at centre. Brock Boeser and J.T. Miller are legitimate top-line wingers.

So what’s missing? Well, a lot, but let’s focus on two important things: a matchup centre, and a shutdown defence pair.

The Canucks desperately need a good two-way third-line centre. It’s what Benning thought he was getting when they committed long term to Brandon Sutter in 2015.

That really seems obvious when you look at the minutes played at five-on-five by Canucks centres on Saturday against Connor McDavid. Horvat (12:40) led the way, followed by Miller (5:39) and Sutter (3:33). Adam Gaudette, meanwhile, only played 40 seconds against McDavid.

Such a matchup game whenever you play the Oilers. Here's how much every #Canucks player played against McDavid 5-on-5 tonight. pic.twitter.com/abo87Sjz8O

Just like how Manny Malhotra freed up Ryan Kesler in 2011, adding a defensively reliable third-line centre could do wonders for Horvat.

The other thing to notice from the minutes against McDavid? The Canucks’ shutdown pair right now is Alex Edler and Nate Schmidt, which isn’t ideal. Edler turns 35 next month and is slowing down. Schmidt, an offensive-minded blueliner, can play the role of shutdown defenceman, though he’s not exactly the second-coming of Willie Mitchell.

Those two-three pieces aren’t easy to find, but if the Canucks are to make the next step, they’re pieces they’ll need to find.

Pettersson didn’t join the Canucks on their eastern road trip, which begins tonight in Ottawa. That probably means he’ll miss the next four road games, which would mean he’ll miss at least nine games in a row.

The injury was initially not thought to be serious, but the timeline keeps shifting.

On March 8, Travis Green said he was hopeful to get Pettersson back within the week. On March 9, he said he’d be out at least another week. Now on March 15, we’re finding out that he’s probably out until March 22 at the earliest.

They’ve won without him, but they’ve done it on the back of Demko. Doesn’t take a genius to figure out that they miss him.

Tyler Motte did make the trip, which is a good sign that he may soon play his first game since February 6. Antoine Roussel, who missed Saturday’s game, is also on the trip.

Jay Beagle didn’t fly with the team though, so that’s a bad sign.

Irfaan Gaffar has a couple of nuggets here:

After speaking 10-days ago there has been minimal to no conversation with the #Canucks and Pearson camp about a new deal. Also sounds like Virtanen won’t be moved before or at the deadline unless there’s an offer that Benning can’t refuse.

Went to a hockey game and a rugby match broke out

To be fair, Yakety Sax makes everything better.

Other teams catching up in games played

The schedule oddity that has resulted in the Canucks playing more games than any other team in their division — often many more games — is about to end.

The Canucks will have played 38 games by March 31 — which follows a stretch of six days off in a row for the team.

Here’s what the games played column will look like by the end of the month:

At least there’ll be less math involved when we look at the standings.

I’m not saying there’s a chance, but… 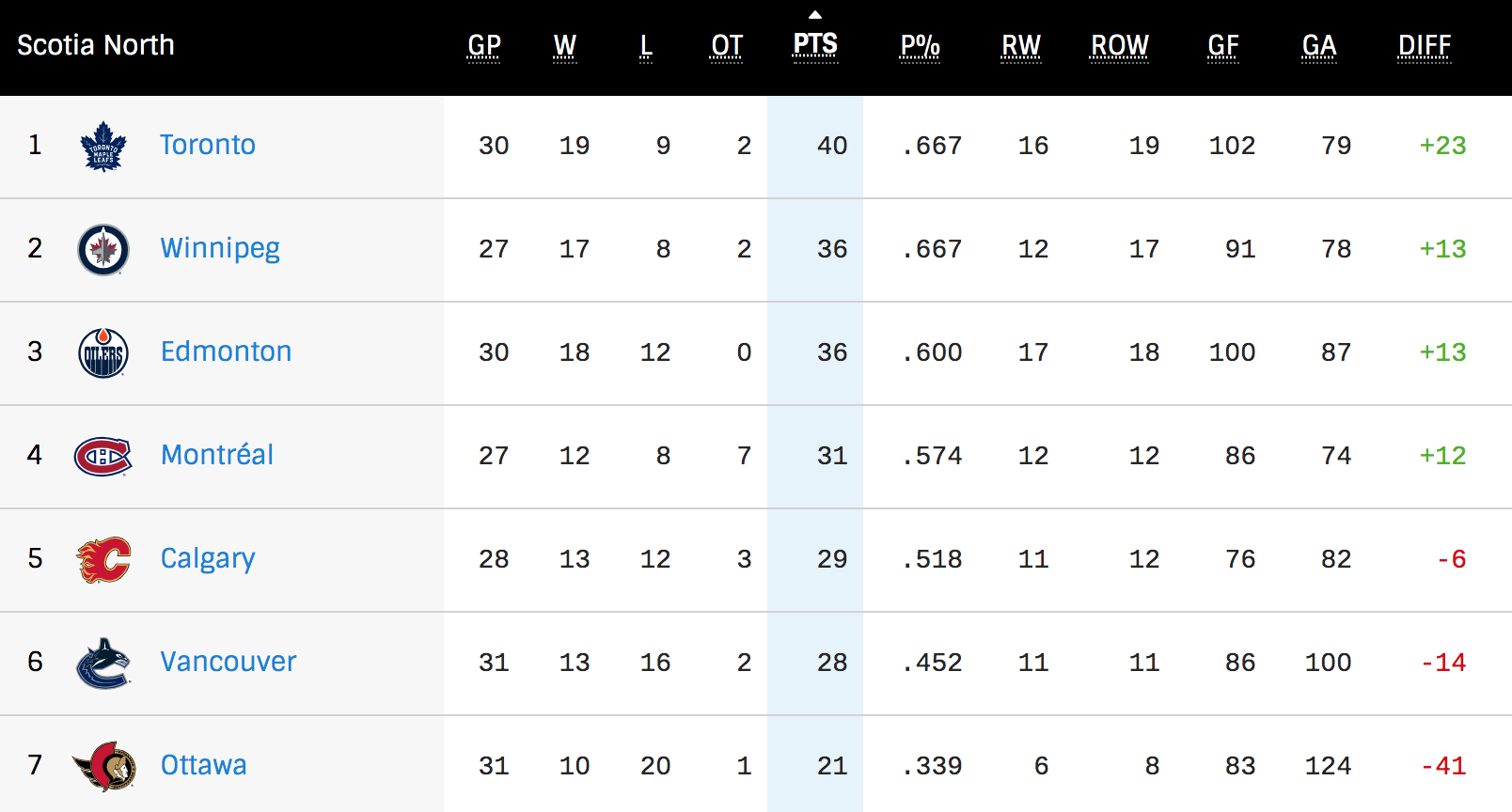 If the Canucks then beat Montreal twice in a row, Vancouver — dare I say it — will have re-entered the playoff race.

Look, that’s a damning statement in itself, but work with me here.

If all that happens, the Canucks would be sitting five points ahead of the Habs, but with Montreal still holding four games in hand.

Is any of that at all likely? Well, no — even the games against Ottawa aren’t a slam dunk for the Canucks. But we can dream, can’t we?