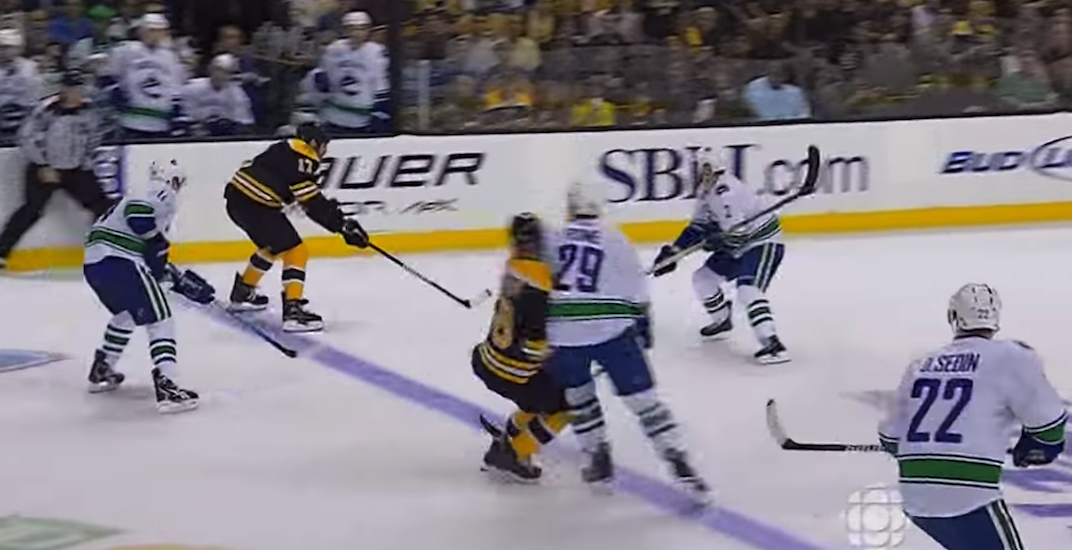 It was arguably the turning point of the 2011 Stanley Cup Final.

Up 2-0 in the series heading into Boston, Game 3 began with a bang — and a pretty big one.

Just over five minutes into the game, Aaron Rome delivered a devastating open-ice hit on Nathan Horton, knocking one of the Bruins’ top players out of the series.

Under the rules at the time, the hit was clean other than the fact that it was late.

Still, Rome was given an unprecedented four-game suspension — the longest in Stanley Cup Final history — to end his season.

Rome spoke about the incident on the Halford and Brough show on TSN 1040 today, calling it a “tough memory.” The former Canucks defenceman said he was shocked at the time when he learned about the length of the suspension.

“Looking back, based on things that have happened since, watching the NHL, I still don’t think that those four games were totally justified, especially when you take into account the playoff games are magnified even more than regular season games. So I feel like that four-game suspension was closer to a 10-game regular season suspension, which is tough, and at that time totally unprecedented.”

Rome has a point.

Chris Pronger elbowed Dean McAmmond in the head during the 2007 Stanley Cup Final, knocking the Senators forward out of the series in Game 3. The suspension? One game.

Years later, Brian Burke explained how the NHL weighs suspensions differently in the regular season and the playoffs.

“In the Finals, we used to use a factor of six to eight games, per game,” said Burke. “I wish Player Safety would explain it better. These games count more than regular season games.”

In other words, Burke was saying that Rome’s suspension would have counted for 24 to 32 games in the regular season — which is objectively outrageous.

Ok, how about some positive memories from 2011?

Sportsnet is replaying Canucks-Sharks Game 5 from the 2011 Western Conference Final this Saturday at 7 pm PT. You’ll remember this game for the Kevin Bieksa OT goal to send the Canucks to the Stanley Cup Final.

But you might have forgotten how the game got into overtime in the first place, as Ryan Kesler scored with just 14 seconds left in the third period to tie the game.

Thoughts on this Canucks-Grizzlies jersey mashup?

Neat idea, but it looks more like a practice jersey to me. Add some piping and we may have a winner.

Some of the best sports radio content to come during this sports-less time has been from Halford and Brough, who have been interviewing Canucks folk heroes from the past. Raffi Torres was outstanding, but so was Gerald Diduck.

Gerald Diduck tells @HalfordTSN @JasonBroughTSN that the 94 #Canucks team was extremely tight, had great leaders, and “it doesn’t hurt to have a goalie who’s weird as s***”

Checking in on Canucks players

The Hughes brothers, Quinn and Jack, are back living with mom and dad. They gave everyone a tour of the house in this video produced by the NHL:

Meanwhile, Tanner Pearson answered questions from Vancouver media from his home in Kitchener. No, he hasn’t been able to convince Tyler Toffoli to re-sign yet.

But my favourite Canucks content on social media this week came from the team’s mascot Fin.

As we wrote about yesterday, Fin is touring hospitals around Metro Vancouver, travelling to Surrey most recently. He’s giving stick taps to healthcare workers and blasting the Canucks goal horn on the Fin Mobile.