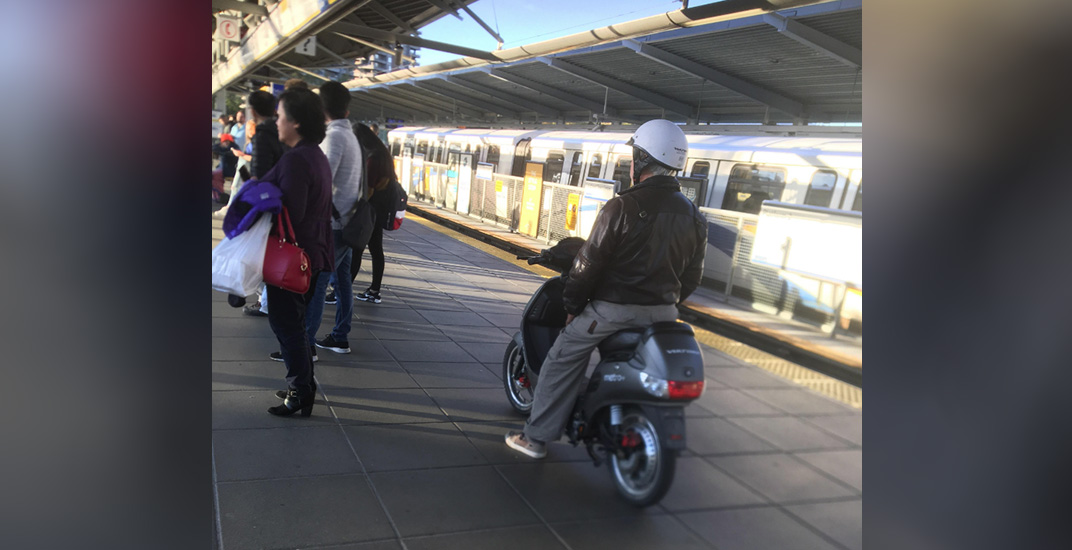 Bikes and even electric bikes are certainly allowed on SkyTrain, depending on the time of day. But mopeds… well, not so much.

However, that was the case earlier in the week when a Reddit user captured a photo of a man who allegedly dangerously rode his moped on the platform of Lougheed Town Centre Station.

He brought the scooter onboard a train during the busy peak travel time.

“This guy was zipping through the crowds on the platform at Lougheed trying to get his motorbike on the train during rush hour,” wrote the user. “He cut off about 6 people and forced his way into the train.”

“People just looked really annoyed and angry that he was there! I was going to tell him he wasn’t allowed to have that THING on the platform but I played it out in my head, he probably would have just said ‘mind your own business’ and sped away or ignored me lol. I’m almost positive he got a ticket somewhere along the way. He had to have. Can’t pull shit like that during peak times.”

While mobility scooters are certainly allowed, the kind of scooter the man used is not a permitted device on transit.

TransLink’s policies specify that two-wheeled electric and gas-powered scooters cannot be brought onto the train system.

When it comes to bringing a permitted bike onto the train, there are no time restrictions on the Canada Line, which uses wider body trains, although cyclists should still be considerate of other passengers during the peak hour crush.

But bikes are restricted from the Expo Line and Millennium Line during peak hours in the peak direction only.

Bikes with trailers of any kind are also forbidden, and if it isn’t already common sense: cyclists must dismount and not ride their bike through any area of the station.