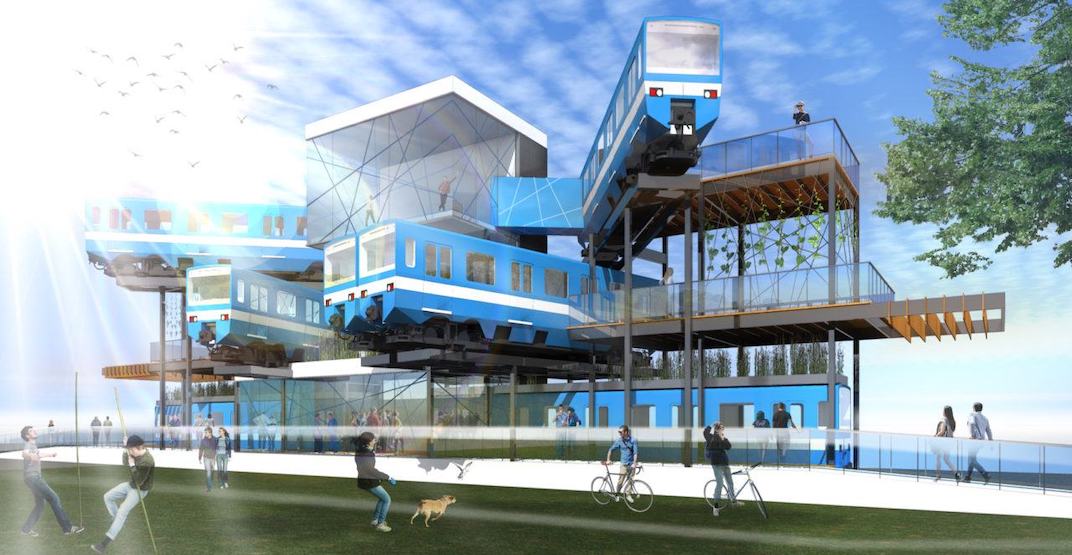 Artistic rendering of a new community complex made out of Montreal's old metro cars in Lachine Canal Park. (STM)

Over the coming decade, TransLink will need to figure out a strategy for disposing of its original SkyTrain car fleet entering retirement.

There are 150 Mark I cars, with over two-thirds of these cars introduced onto the SkyTrain system when it first opened in 1986. The remainder of these cars went online in the early 1990s.

By the middle of the 2020s, the oldest of these ageing Mark I cars will begin to see retirement, and by the end of the decade they will be completely phased out. These cars will be replaced with new cars as part of a future order of 200 new SkyTrain cars for the Expo and Millennium lines, with the cost of the new additional and replacement train order included in a forthcoming $1.47-billion upgrade of the mainline train system. 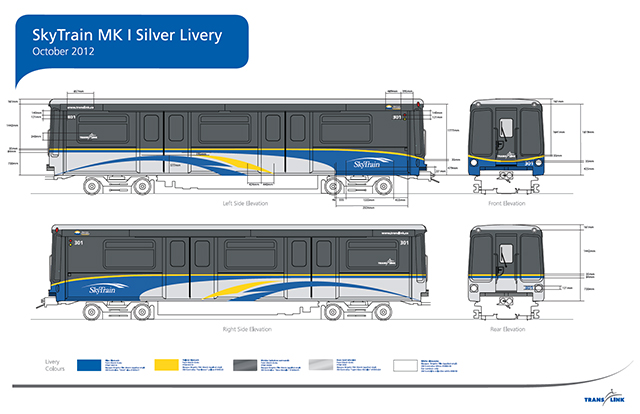 New livery design for the Mark I cars that underwent retrofits in the 2010s. (TransLink)

These cars have already clocked millions of kilometres in mileage, and 114 of the original Expo-era cars went through a minor mid-life refurbishment, at a cost of $38 million, over the past decade to extend their useable lifespan a few more years beyond the 25-year design lifespan.

To provide further context on just how many of these Mark I cars exist, if all 150 cars — each 12.7 metres in length — were lined up end to end, they would span a distance of about two kilometres. This is a distance equivalent to Robson Street from Denman Street in the West End to Beatty Street next to BC Place Stadium.

When inquired on the future of the Mark I cars, TransLink spokesperson Ben Murphy told Daily Hive the public transit authority is in the early stages of this process and any plans for decommissioning of the older cars will be announced in due course. 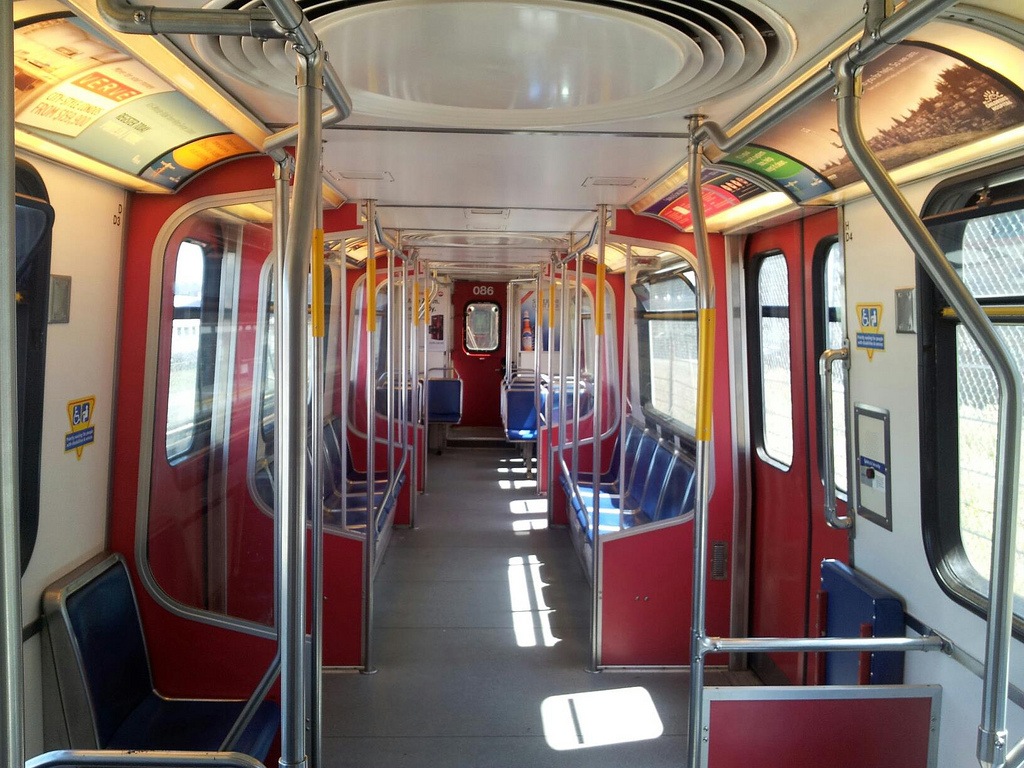 Interior of a Mark I SkyTrain car without renovations. (Juan M. Sanchez / Flickr)

An increasing number of public transit systems have train cars reaching the end of their lifespan, given that most major subway systems outside of London and New York City were constructed in the decades after the post-war era.

Some transit systems unceremoniously send their train cars to the junkyard, while others put in a bit more effort and try to come up with creative uses for at least some of the cars as legacy projects to pay homage to the SkyTrain system.

The latter was the case with Montreal’s transit agency just a few years ago, when it launched a public competition to generate ideas for the future use of STM’s original fleet of 50-year-old metro cars.

Others have also put cars up for auction, with cars sold at a highly nominal price. But buyers have had to bring their own crane and extra-long flatbed truck.

Aside from being turned into scrap metal, here are 12 ideas on what the old Mark I cars could be used for after their retirement from the SkyTrain system:

1. Sell some of the cars to Toronto (for real)

The Mark I cars are largely compatible with the Toronto Transit Commission’s (TTC) much-maligned and poorly managed Scarborough RT, which opened in 1985 — shortly before Vancouver opened its first SkyTrain line using the same Ontario-designed technology.

The TTC’s 6.4-km-long, six-station Line 3 is built with the same track gauge and uses the same model of Mark I cars, complete with linear induction motor propulsion technology. This system sees an average of 35,000 boardings per weekday. 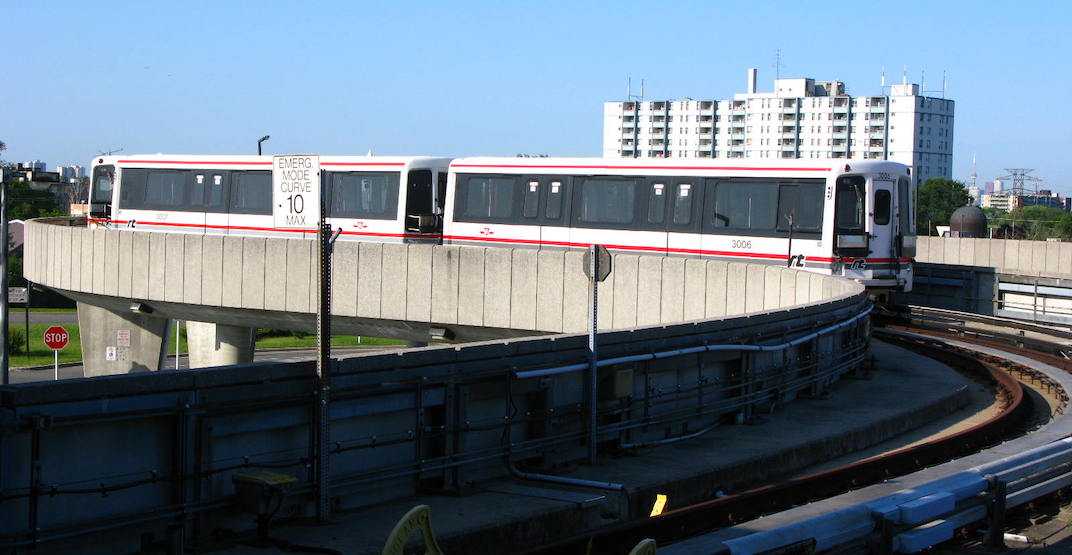 But transit operators in Toronto have been depending on a small fleet of highly worn-down seven four-car Mark I trains built in the 1980s, as the tight curves of the system do not allow for longer cars — among many issues with this particular line.

This short-length car model was discontinued by Bombardier, as there was a greater demand for longer, larger cars, which led to the creation of the Mark II and Mark III cars now in use on SkyTrain.

RT’s Mark I cars are in such a terrible shape that in 2017, the TTC spent $6.8 million on emergency repairs after discovering there were corrosion holes in the cars.

There are plans to replace the RT with a $3.5-billion subway extension by 2026, but continued delays with planning could cause the TTC to miss this target date by many years

With some minor modifications to each car, this is how TransLink’s Mark I fleet could come into play and be given a second life, even if it is only temporary.

In recent years, the City of Vancouver and the provincial government have been rolling out a major temporary modular housing program to provide an immediate and effective measure to address rising homelessness.

Over 600 units of modular housing have already been built in the city on under-utilized sites.

While the municipal government has chosen an Alberta-based supplier that manufacturers and builds modular housing units using pre-fabricated compartments, other applications in other cities around the world have designed their structures by stacking shipping containers.

Just like shipping containers, could the Mark I cars be re-engineered into modular housing compartments? 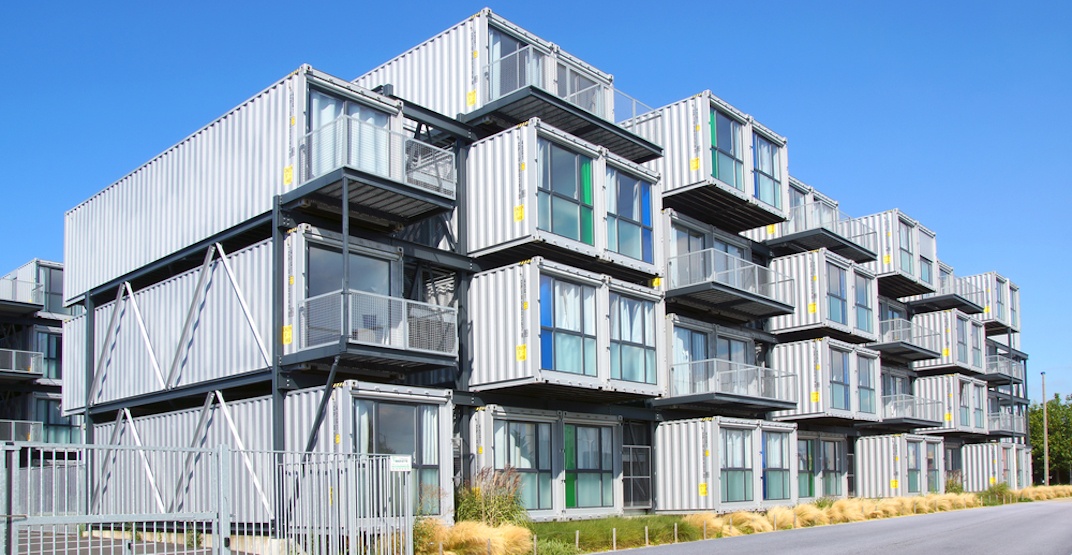 Short of a modular housing complex, the Mark I cars could become overnight-only homeless shelters, with standalone cars modified and located in strategic areas to provide emergency housing for those in need.

Entire cars or a portion of a car could be reused and redesigned into bus shelters that provide improved protection from the elements. Larger shelters using a larger or full portion of the car could serve bus stops next to open areas, such as public parks.

The cars could be incorporated into new children’s playgrounds, with a design that uses the car as a whimsical yet functional centrepiece. 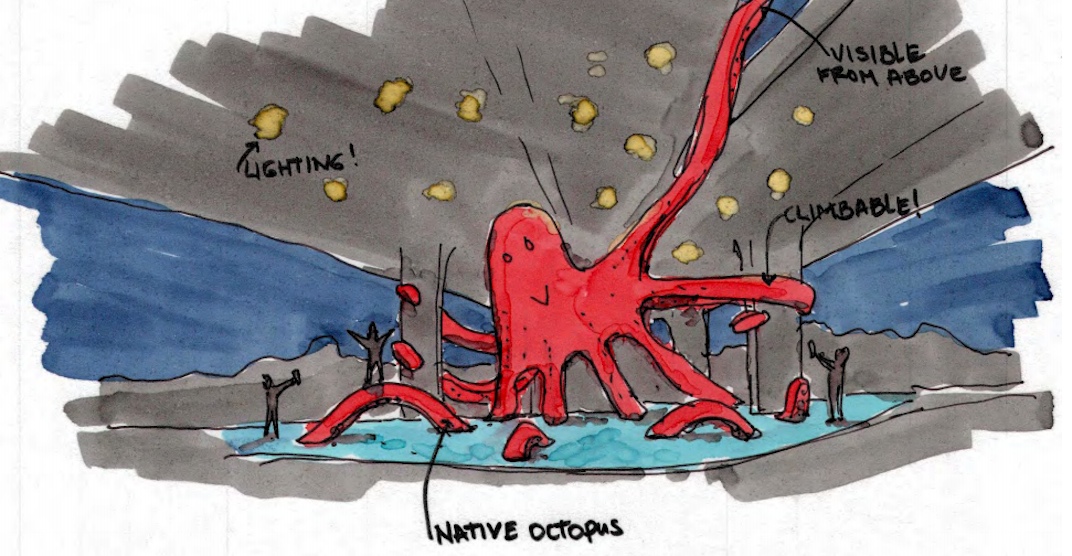 Concept for the Coopers’ Park expansion. (Vancouver Park Board)

Shipping containers are already used around the world for retail and food kiosks and cafe bars in open spaces, so why not train cars? 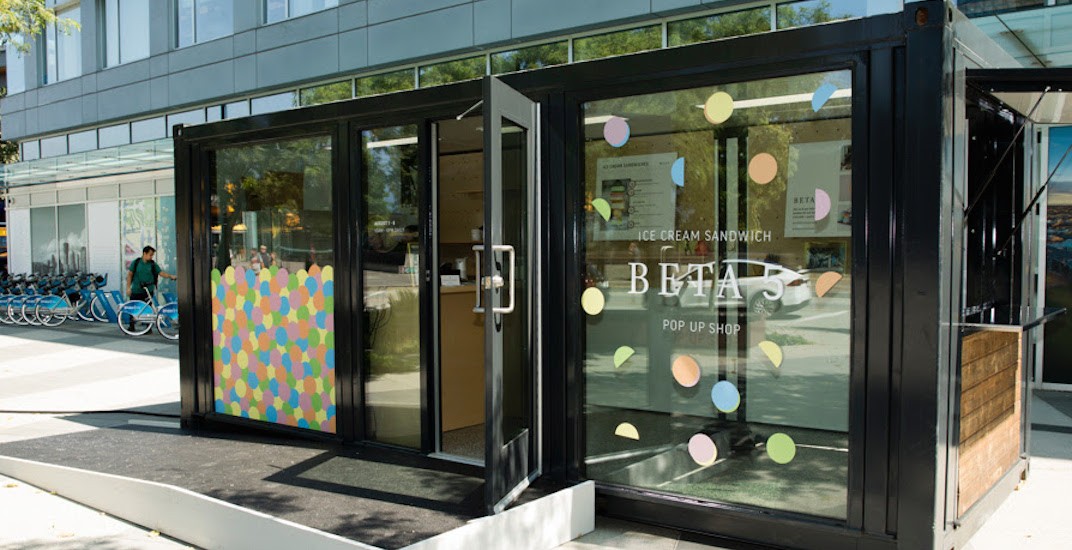 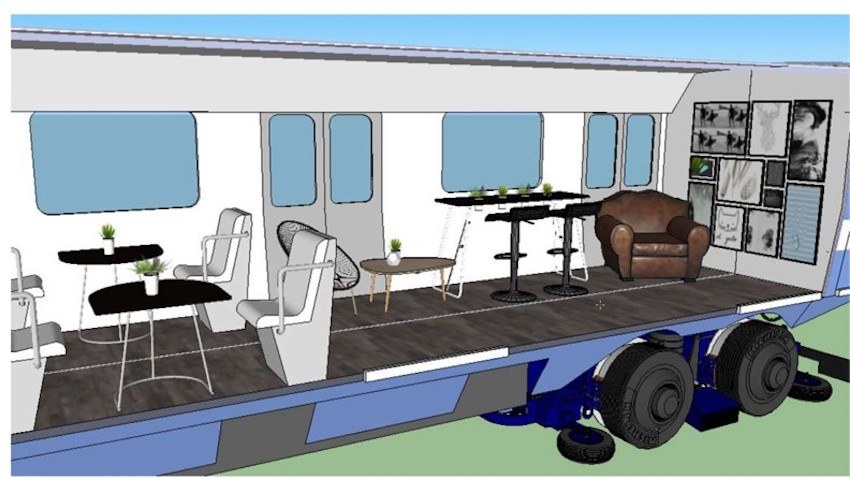 With widened doors and windows on the sidewalk side, and when coupled with other modifications, this concept would be a variant of the traditional curbside patio for restaurants — and it is also fully covered, replacing the need for large patio-style umbrellas.

The train exterior on the opposite side facing the roadway travel’s lanes would serve as a protective barrier from the travel lane. 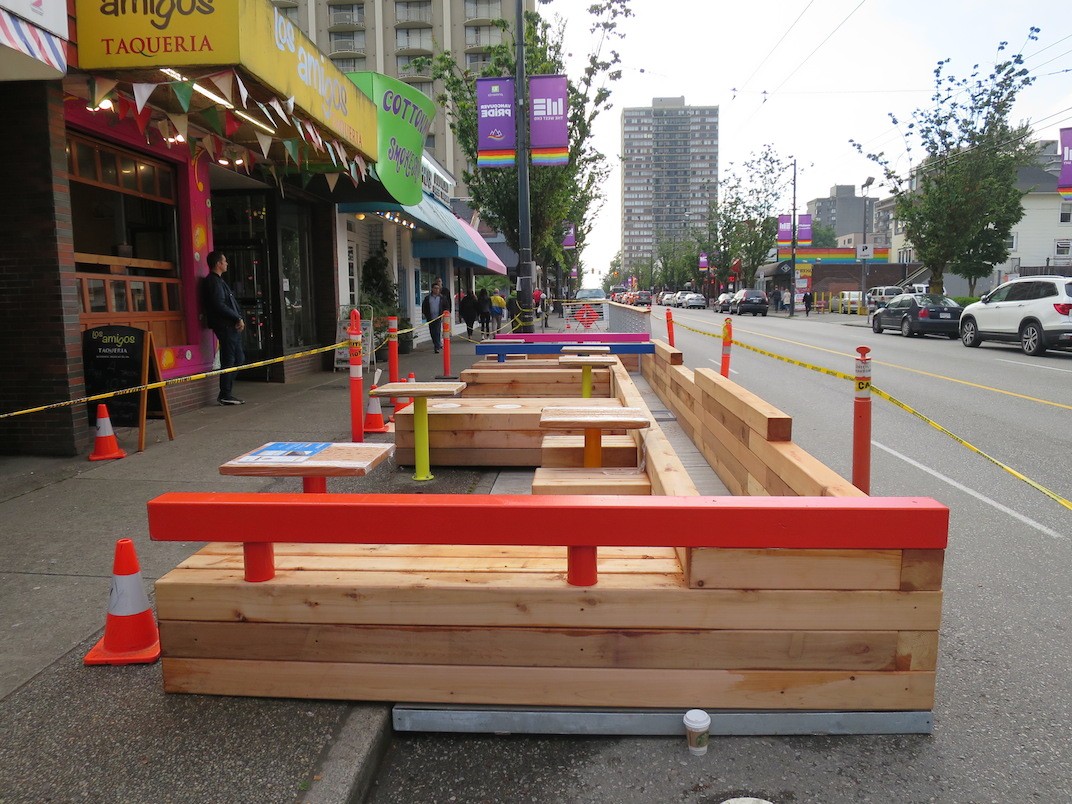 Vancouver already has a soon-to-be permanent public art piece, called Trans Am Totem, that is literally comprised of junkyard automobiles perched on top of a tree trunk.

There is clearly potential for a creative application of the train cars as public art. 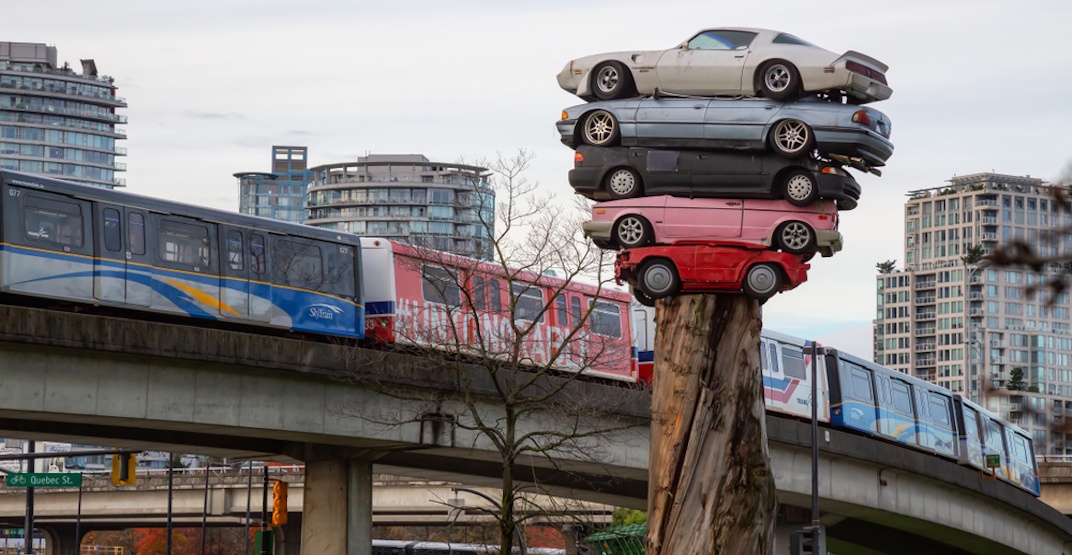 Trans Am Totem and a Mark I SkyTrain passing by in the background. (Shutterstock)

The cars could be retrofitted into functional community gathering and social spaces, situated in public spaces.

A new urban park in Montreal with a retrofitted old STM subway car as a community hub opened last summer. This park, called Station FM-R, was delivered as a pilot project next to the Lachine Canal at a cost of about $600,000. 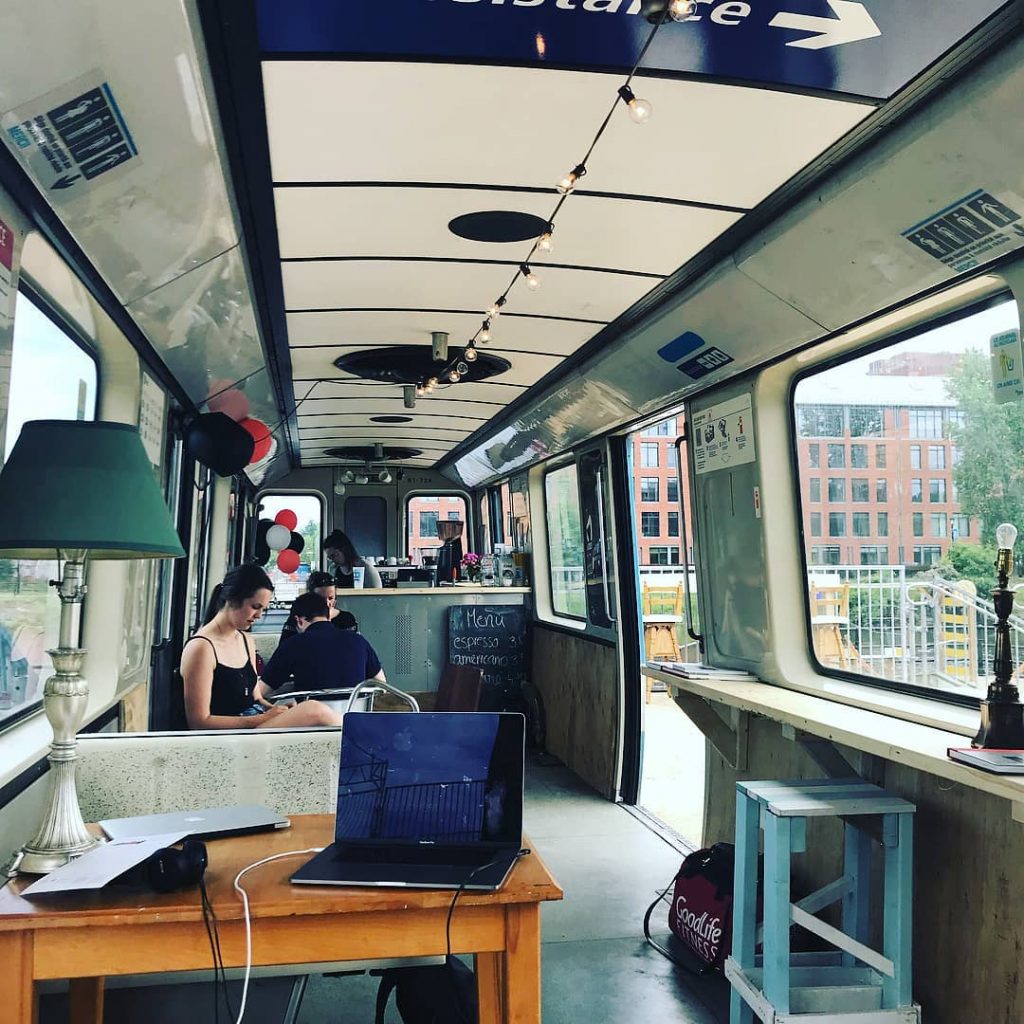 An old STM subway car converted into a community space in a park in Montreal. (mtlcafecrawl/Instagram)

Following the successful pilot project, proponents are hoping to build a $7-million cultural and community hub using retired STM cars, stacked up to three storeys high, in a park location in Montreal’s Griffintown.

If engineering challenges can be overcome, this permanent, larger iteration would entail a cafe on the first floor, and boutique and event spaces on the upper levels. All of the levels and cars would be connected together by a glass pavilion building with solar panels to make the hub carbon neutral.

Artistic rendering of a new community complex made out of Montreal’s old metro cars in Lachine Canal Park. (STM) 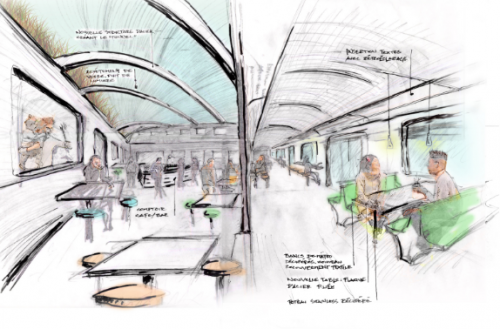 Artistic rendering of an old STM subway car converted into a cafe and food counter. (STM) 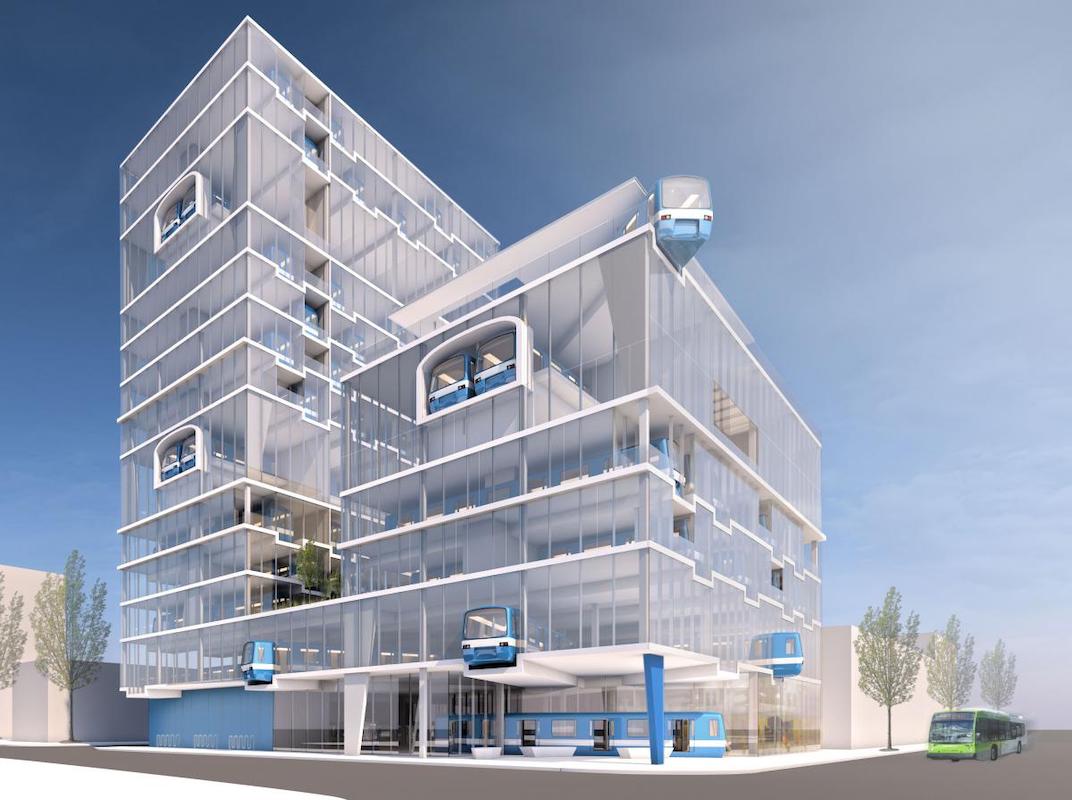 Trailers and modified shipping containers are often used as on-site construction offices and storage areas. Perhaps some of the cars could be modified for such a use? 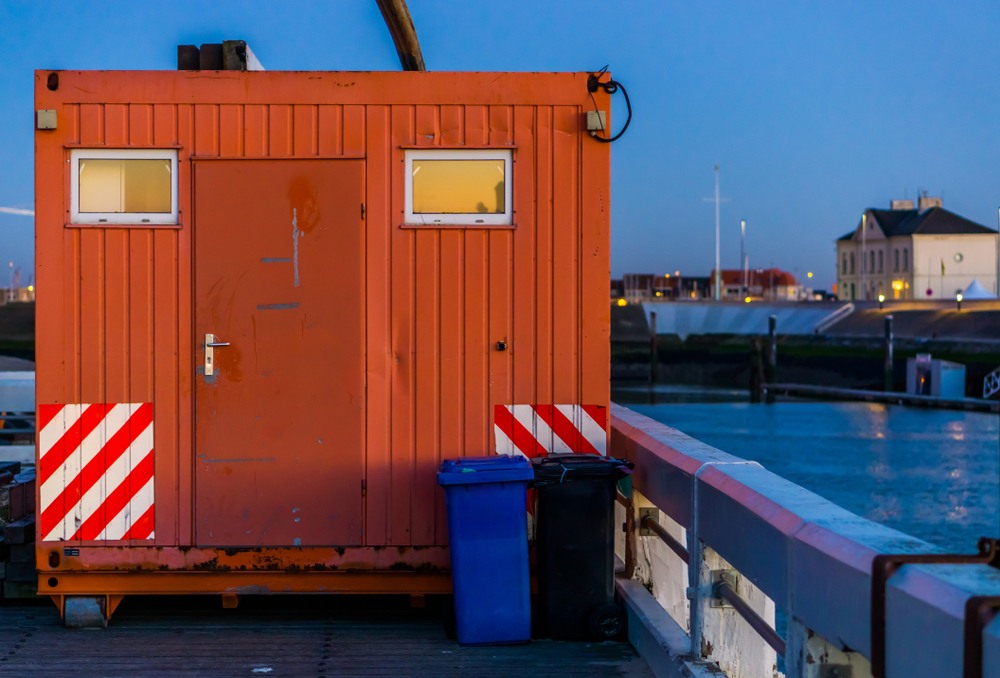 12. Drop cars into the ocean for artificial reefs

Other than being recycled in scrapyards, one of the most common final uses for old subway cars is their conversion into artificial reefs.

New York City’ MTA is a leader in this practice. Over the years, more than 2,500 old MTA subway cars were cleaned and gutted to remove any materials that would be harmful to sea life, then dumped into the middle of the Atlantic Ocean to create underwater reefs for crustaceans and fish.

One of the most well-known reefs, dubbed the ‘Redbird Reef,’ is comprised of 714 MTA Redbird model subway cars, eight tugboats, 86 tanks, and 3,000 tons of truck tires. Within the first seven years of its creation, the quantity of marine food in the area increased by 400 times as a result of the reef.

The subway cars, in particular, were ideal sculpted structures for the reefs, with their empty, box-shaped volumes allowing for water circulation and for fish of various sizes to swim around and use as a habitat.