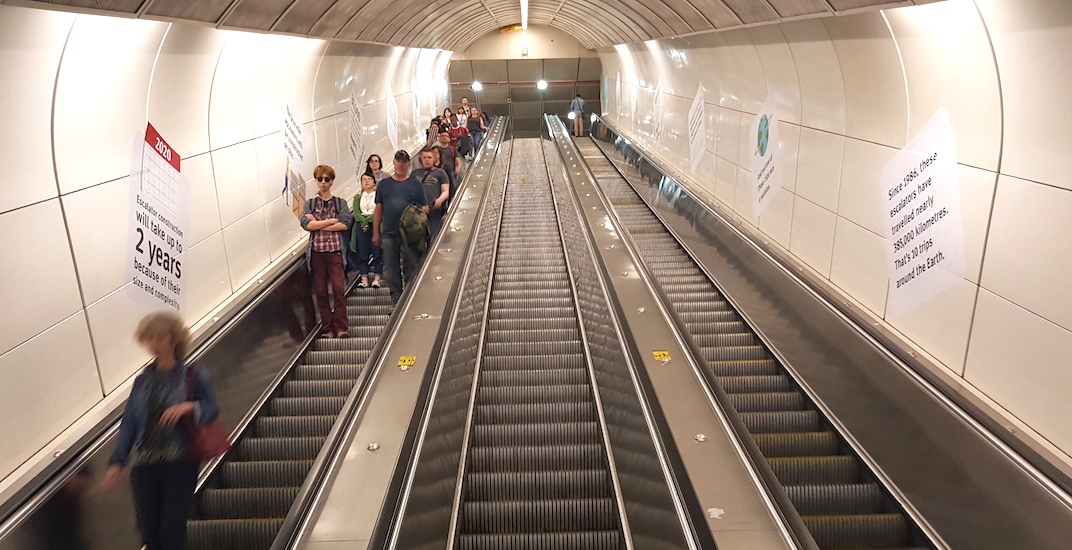 There is now light at the end of the tunnel for the lengthy construction disruptions inside SkyTrain’s Granville Station in downtown Vancouver.

TransLink says progress on the replacement project for the escalators on the original Granville Street entrance pathway reaching the subway platforms is on schedule to allow for a reopening sometime this spring. A precise reopening date will be announced later.

The original 1985-built underground station pathway was closed in May 2018 to allow for a 24-month construction project of rebuilding six escalators, including the set of three, super-long escalators — each a length of 115 ft with 167 steps and a height of 46 ft — and three other short escalators connecting the concourse and platform areas.

In recent months, pathway access to the Hudson’s Bay’s lower basement retail concourse, just beyond the Topshop entrance, has been completely closed to allow for the next phase of work to be finished.

The Seymour Street entrance, which only leads to the original pathway, has been closed since the start of construction. 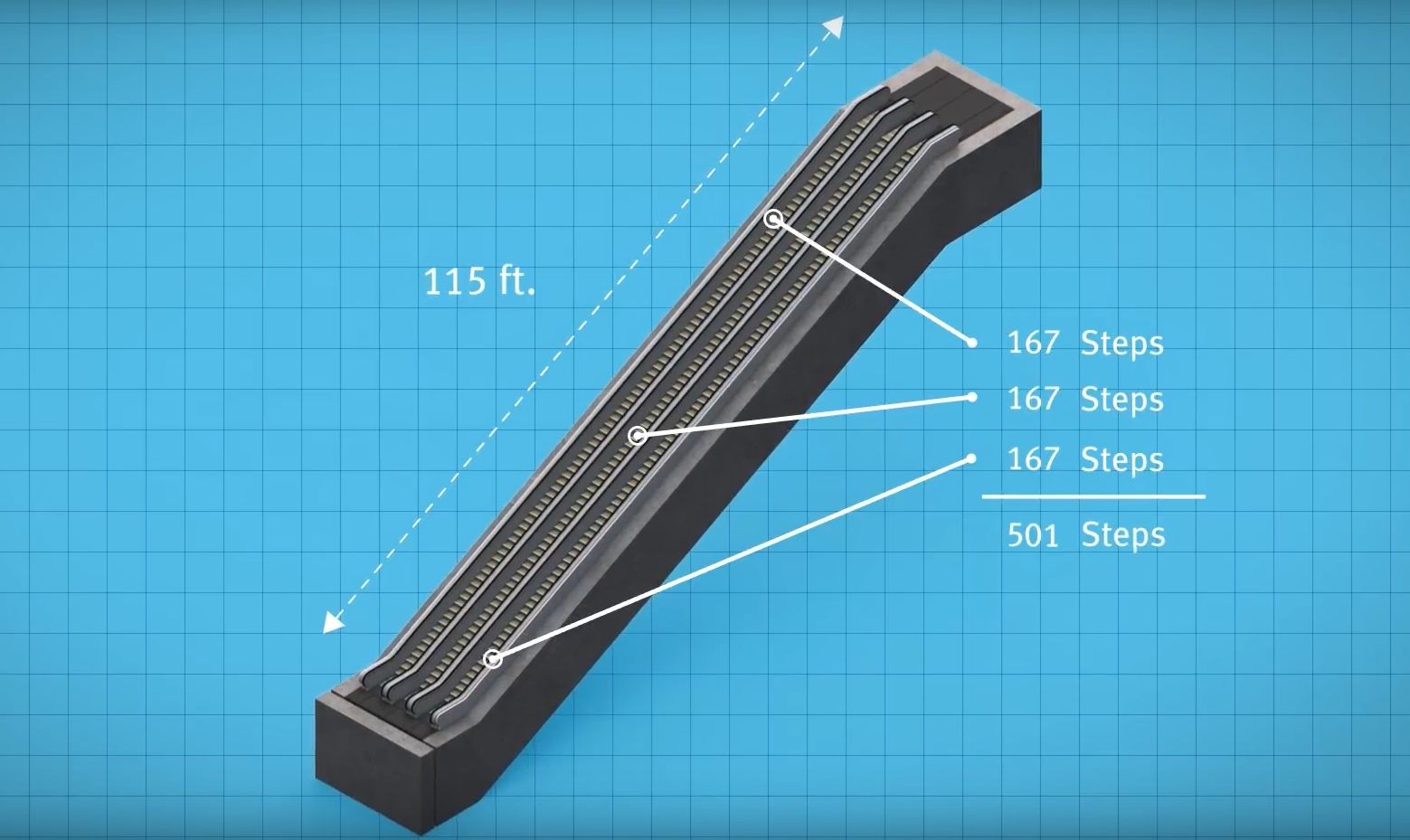 For nearly two years, all passenger traffic volumes in and out of the station have been redirected into the Dunsmuir Street entrance of the station. Apart from overcrowding and congestion, particularly at the remaining fare gates during peak hours, there have been no major operational issues with the station.

Prior to the 2018 closure, two additional fare gates were added to the Dunsmuir Street entrance pathway, increasing the number of fare gates to six to provide a much-needed capacity increase.

As well, at the time, the public transit authority said “proactive maintenance” would be performed on the Dunsmuir Street entrance’s three, super-long escalators to prevent the need for disruptive, unplanned maintenance that could result in a temporary full closure of the station. Replacement parts for these 2006-built escalators were pre-ordered to allow for quicker repairs.

TransLink states the entire escalator replacement project at Granville Station is within its $14.5 million budget, which is partially funded by the federal and provincial governments. This is the first replacement project of the heavily-used, original escalators since the station opened.

As of 2018, Granville Station is SkyTrain’s fifth busiest station — just behind Waterfront Station, Metrotown Station, Commercial-Broadway Station, and Burrard Station. It sees average daily boardings of 21,000 on weekdays, 16,000 on Saturdays, and 12,400 on Sundays and holidays. 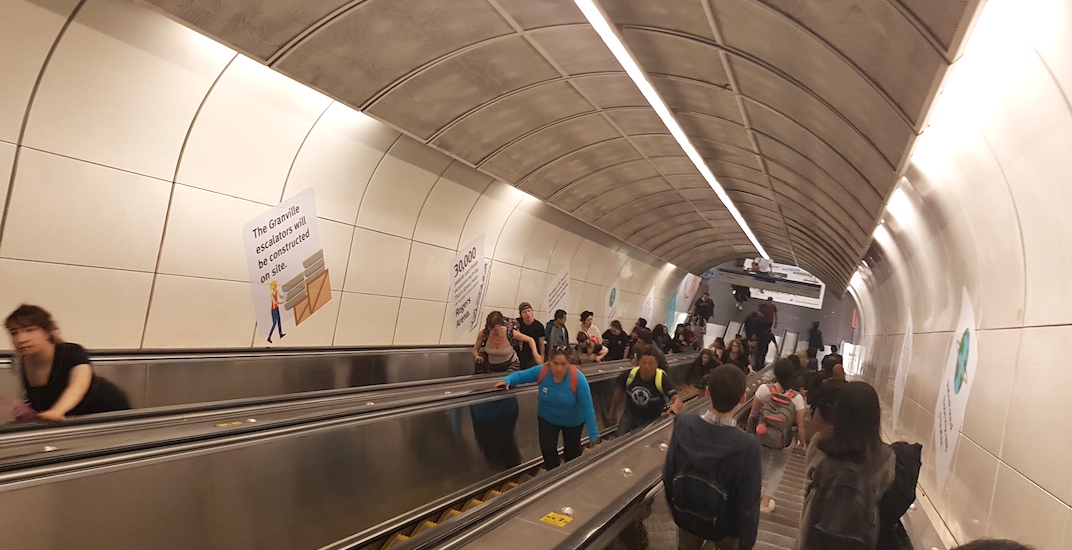 Elsewhere on the transit network, all four escalators at Waterfront Station’s SeaBus terminal reopened this week after a months-long replacement project, and construction is progressing on the replacement of the old Expo Line escalators at Commercial-Broadway Station.

All three escalator additions to each of the Canada Line stations in downtown reached full completion early this year. 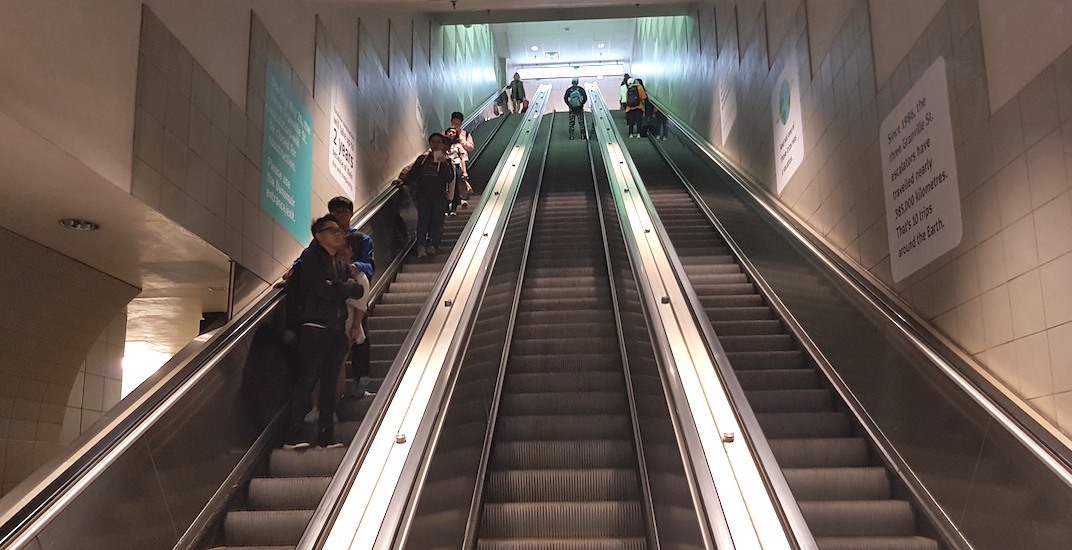