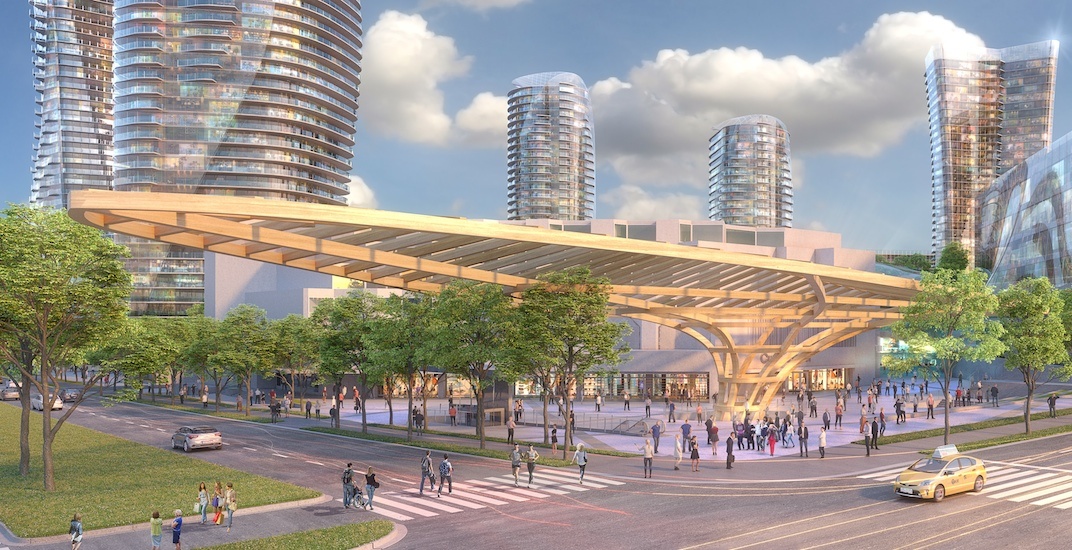 Artistic rendering of the new canopy over the plaza at the northeast corner of Oakridge Centre - at the corner of Cambie Street and West 41st Avenue - as part of the Canada Line station upgrades. (Oakridge Centre project team)

In just a few years, many more people are forecast to be streaming in and out of the Canada Line’s Oakridge-41st Avenue Station to access the new and expanded Oakridge Centre shopping mall, and it beckons a major renovation and expansion of the SkyTrain station that serves the area.

Gregory Henriquez with Henriquez Partners Architects, the lead architecture firm for the redevelopment, told Daily Hive that several improvements have been proposed for the station located at the northeast corner of the shopping mall site at the intersection of Cambie Street and West 41st Avenue.

This includes the demolition of the existing ground-level station house and building a super-sized, landmark wood and glass canopy that covers the renovated outdoor plaza and extends to the Cambie Street median. This canopy will double as a new roof for the ground-level entrance into the station.

“The roof is integrated into the station and entrance into the public park on the rooftop of Oakridge Centre, marking an important node into the city,” said Henriquez.

“Right now the existing plaza is a bit sad, so this is a way to celebrate the transit spot where tens of thousands of people will be coming onto the site. They will get a very inspiring entry.” 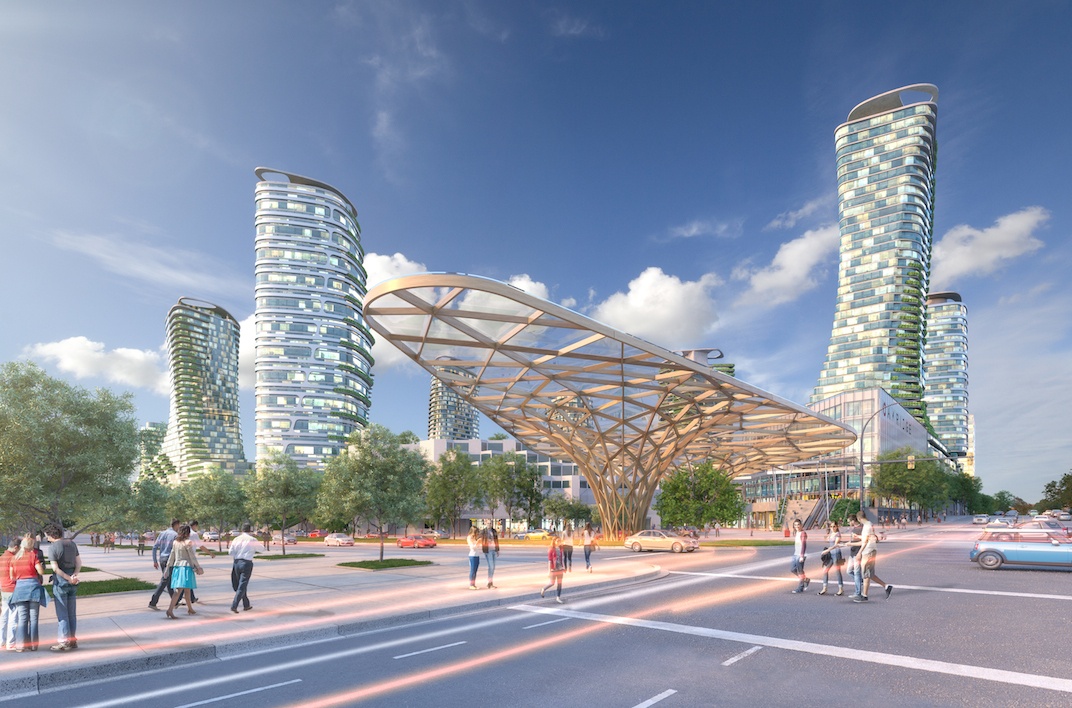 Artistic rendering of the new canopy over the plaza at the northeast corner of Oakridge Centre – at the corner of Cambie Street and West 41st Avenue – as part of the Canada Line station upgrades. (Oakridge Centre project team)

There could also be an improvement to the station circulation capacity, such as a rebuilt ground-level plaza entrance with additional escalators and stairs.

Another idea would create a secondary station entrance into the station by building a direct underground entrance between the station concourse and the new shopping mall.

As well, the developer is proposing to accelerate plans to extend the length of the station platforms. Currently, the platforms are 40 metres long, and like other Canada Line stations there are built-in allowances for a 10-metre extension to a 50-metre length.

It is unclear how these proposed upgrades will be funded, but the Oakridge Centre project team has put a significant emphasis on public transit, specifically the Canada Line station, to fulfill the redevelopment’s transportation infrastructure requirements. 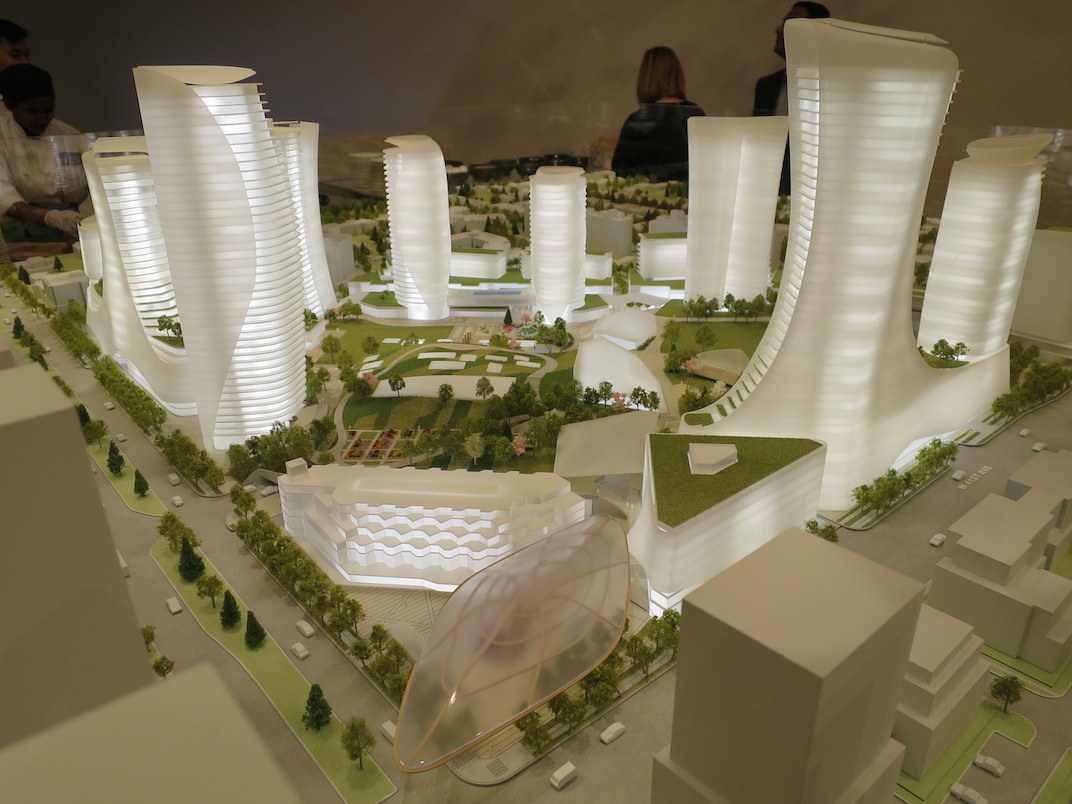 The latest iteration of the redevelopment calls for 6,000 parking stalls to support the site’s 6,000 new residents, thousands of daily shoppers within one million sq. ft. of retail and dining space, and other visitors to the nine-acre park, library, and community centre.

“We work closely with all development projects directly adjacent to SkyTrain to ensure they are well-integrated with our system, and that there is easy and convenient access for our customers,” said TransLink spokesperson Chris Bryan.

“TransLink is in the process of negotiating and reviewing various proposed changes with the developer at this time. We look forward to integrating the future development with the transportation infrastructure of the region.”

Oakridge-41st Avenue Station currently sees an average 16,600 passengers per day, making it the eighth busiest station on the Canada Line. Passenger volumes at the station are projected to double by the time the new shopping centre and residential developments reach full completion in 2025.

Construction on the Oakridge Centre redevelopment begins later this year. 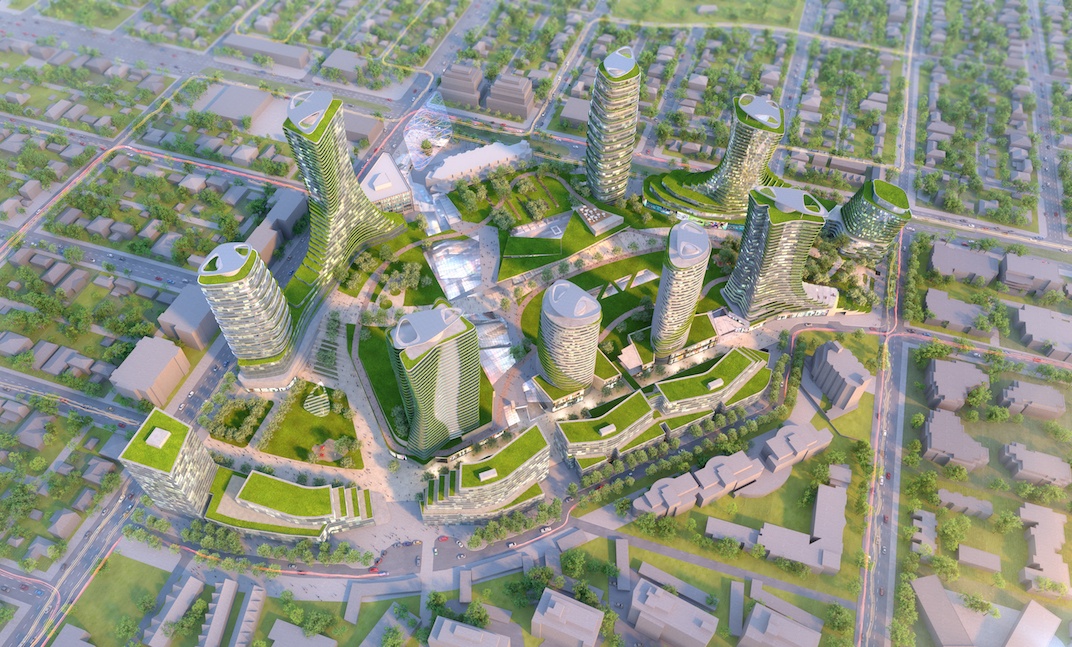