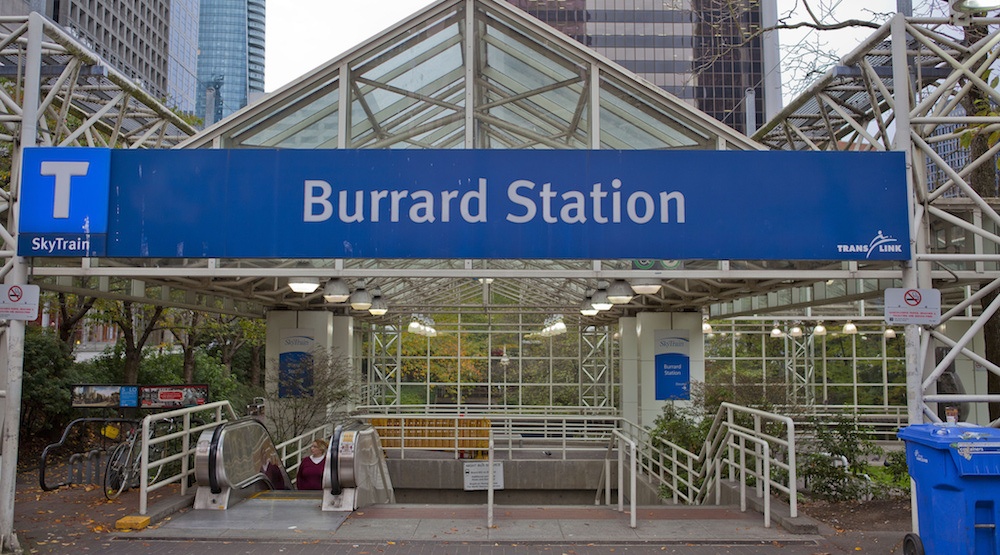 One of SkyTrain’s busiest stations could receive a new, direct secondary entrance to the platform levels in an effort to reduce existing congestion and accommodate future ridership growth.

A Request for Proposals (RFP) posted on TransLink’s website seeks a consultant to explore the conceptual design options of building a secondary entrance for Burrard Street in downtown Vancouver. The entrance would be physically separate from the existing entrance at Art Phillips Park as it would be located across the street, on the east side of Burrard Street right outside of the Park Place office tower.

According to the document, the new street entrance would either be integrated with Park Place or a stand-alone structure within the sidewalk at the southeast corner of the intersection of Dunsmuir and Burrard streets. Space will also be allocated for a ticketing concourse, retail, mechanical and crew rooms, and a Transit Police office. 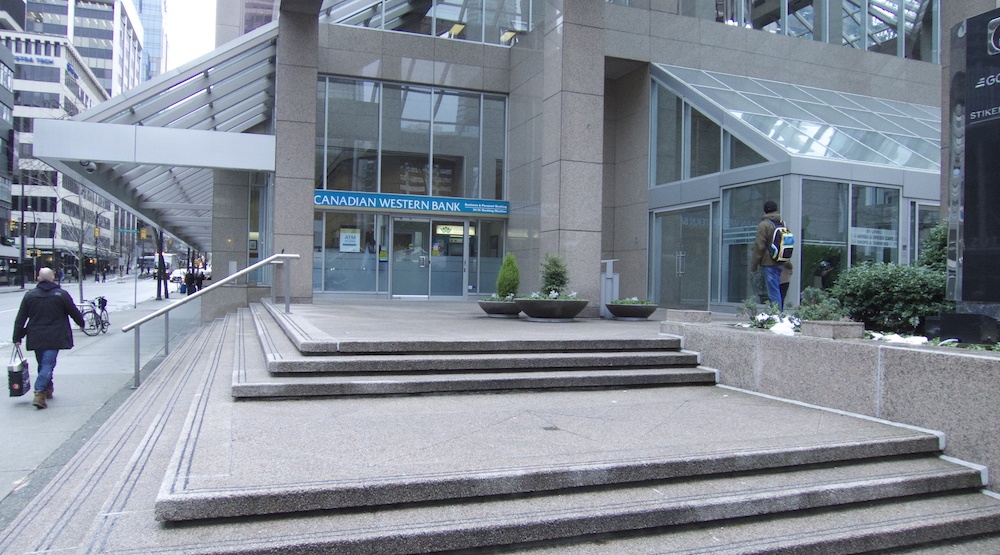 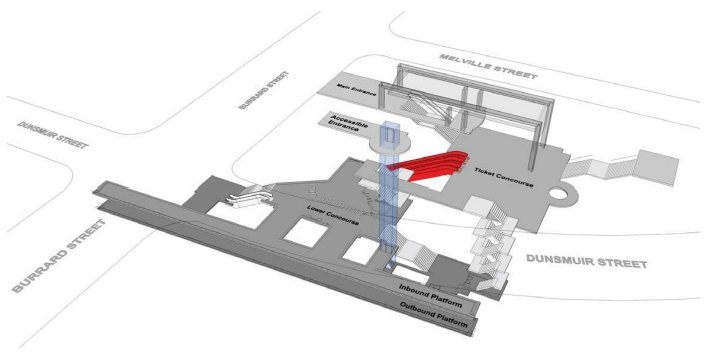 Diagram of Burrard Station with the main escalators highlighted in red – a problematic point for congestion. (Image: TransLink)

A new series of tunnels will directly connect the new East station entrance to Burrard Station’s platform levels rather than making new connections to the existing upper concourse level of Burrard Station. Currently, the three main escalators provide the station with a very limited vertical circulation capacity, and funnelling passenger foot traffic to this set of escalators will only exacerbate capacity issues even further.

Expanding this vertical circulation access point with an additional escalator was considered as an option, but the construction work required would likely be too disruptive to services.

“Due to the limited space at this station entry, it would be difficult to provide a simple solution for the provision of additional vertical circulation elements. Significant modification work would be required, resulting in significant cost implications,” reads the RFP report.

“This alternative option was not preferred by TransLink due to the construction impacts on the station during operation and the lack of additional benefits that would come from a new entrance in terms of access convenience, improved transfers with buses, provision of fare gates and platform optimization.” 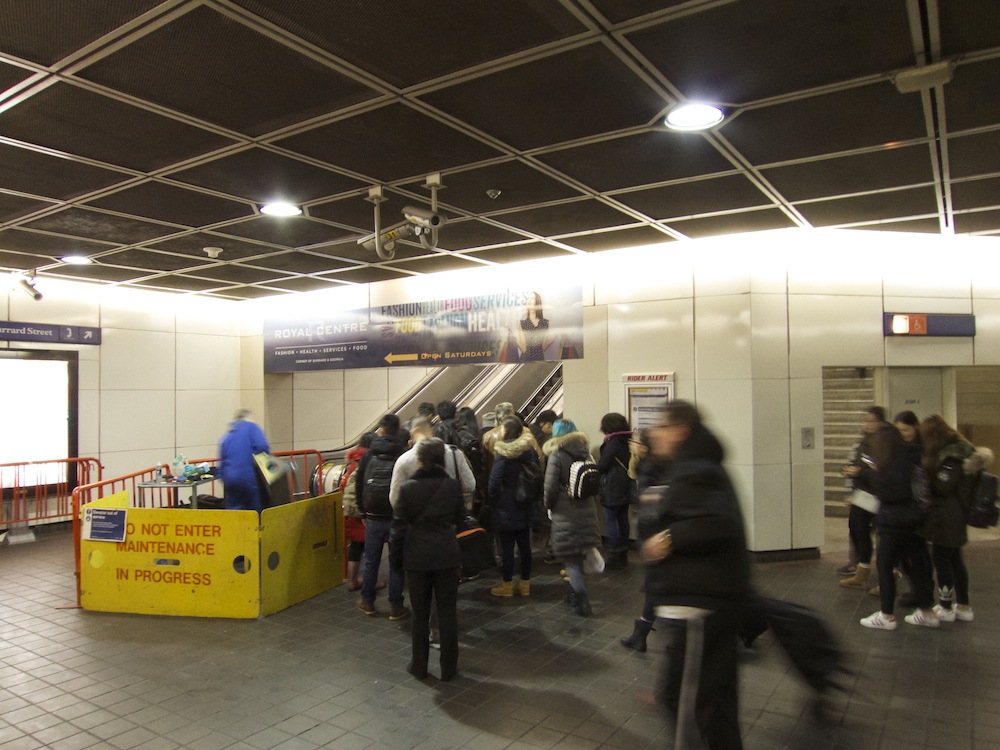 Preliminary concepts identified by TransLink propose a new East station entrance that is accessible only by elevators – no escalators. A very limited site footprint is available given that the new tunnels would have to be wedged in between an underground parking facility and underground utilities.

“The most promising options with respect to addressing vertical circulation capacity include access exclusively by elevators,” the report states. “The escalator options do not provide as much capacity since the escalator quantity is governed by existing site constraints – i.e. escalator footprint needs to fit within the depth of existing parking stalls.”

Precedent has already been set in Seattle for a subway station that is only accessible by elevators. The only way to get to and from the platform level of Beacon Hill Station on the Central Link LRT line is by taking a 20 second ride on one of the four escalators down to the platform level, located 160 feet (49 metres) below ground.

In addition to the construction of a new East station entrance across the street, there could be extensive renovations to the existing station facilities, including upgrading existing stairs, converting the emergency exit staircase into a public staircase, adding a down escalator to the outbound platform level, a new elevator cab, replacing existing ceiling metal panels with perforated metal acoustic ceiling panels, replacing existing white wall metal paneling, upgrading lighting and public announcement systems, and upgrading wayfinding signage.

The upgrades are necessary as Burrard Station only has the vertical circulation capacity to support an Expo Line capacity of 15,300 passengers per hour per direction (pphpd), a load that is regularly achieved during peak hours. By 2041, it is expected that the Expo Line’s capacity will need to grow to 25,700 pphpd to support ridership demand. 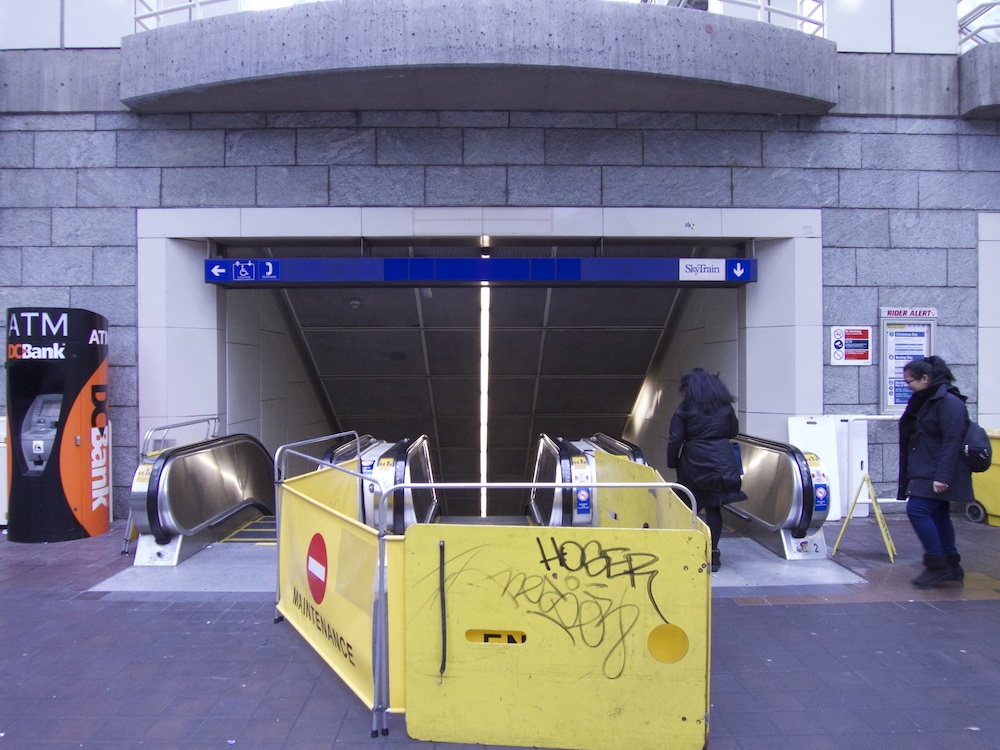