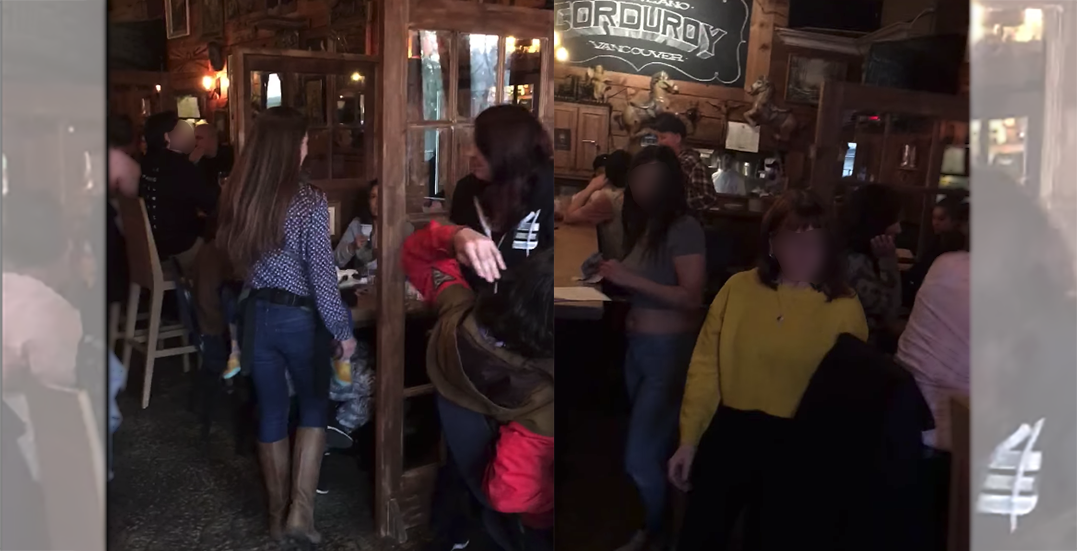 Instead of a swift and coordinated response by provincial officials to shutter two businesses flagrantly breaking the rules, the public was treated to a cavalcade of half-steps, as Vancouver Coastal Health inspectors were shouted out of one restaurant, police failed to issue any tickets and the province’s solicitor general fumed about “consequences” that were nowhere to be found for several days.

It was, in short, a confusing mess.

Eventually, on Monday –four days after the first closure order on one of the businesses — the City of Vancouver stepped in to temporarily suspend the businesses licenses for Corduroy Lounge in Kitsilano and Gusto’s in Olympic Village until April 20.

But even that was a hollow victory for public health.

“The province is the lead on the provincial health officer orders and enforcement of those orders,” Kathryn Holm, the city’s chief licence inspector, told CBC’s Early Edition on Tuesday.

“We as a city do not have authority to enforce those orders.”

“But we can take action to address business activity occurring in the community that is harmful to the health and safety of the community, and that’s what we’ve chosen to do here.”

Just think about that for a second: BC’s biggest city still can’t enforce the rules set by Provincial Health Officer Dr. Bonnie Henry, one year into the pandemic.

The city had to wait for Vancouver Coastal Health inspectors to serve close-order notices to the restaurants — which they initially ignored, again without consequence — before it could springboard off of that and cite its own business bylaws to actually justify pulling a license.

Why the public health inspectors couldn’t simply go in on day one, evict the patrons and padlock the doors also remains a mystery.

For its part, Vancouver Coastal Health couldn’t even be bothered to respond to questions.

The bulk of the blame for all the confusion lies squarely at the feet of Solicitor General Mike Farnworth.

He has extraordinary powers during the province’s ongoing state of emergency — more so than anyone else who has held that job since World War II.

All it takes is the stroke of his pen to bring clarity and consistency to how public safety is protected during this crisis.

On Tuesday, he instead argued with the City of Vancouver about its area of authority.

“Bylaw officers do have the power to do enforcement, that’s been stated right from the very beginning,” Farnworth said.

Farnworth’s ministry also revoked the liquor license of the Corduroy Lounge on Tuesday.

When asked why police didn’t act sooner to issue tickets or make arrests on the weekend, when it was clear the business was violating the public health orders, Farnworth said that’s up to the department.

“How the police deal with the situation is an operational decision and that’s always made
by them, it’s not made by government nor should it be,” he said.

But police agencies have struggled with enforcing changing public health rules since the pandemic began. They are in uncharted territory, with not much of a guide from the politicians in Victoria who continually call for everyone to cooperate and be kind to each other and mostly lack the appetite for giving clear direction on the threshold of when to start handing out fines and arresting people.

The RCMP and Crown prosecutors didn’t arrest anyone or shut down churches in the Fraser Valley that were breaking the rules by holding services indoors last December; instead, the government went to court for an injunction (which it initially failed to get, further muddying the waters).

It took Vancouver police two visits to a wild penthouse party in January before any arrests were made, because officers weren’t sure of the scope of their powers enforcing the public health orders.

And when police showed up to Corduroy Lounge on April 3 with Vancouver Coastal Health
inspectors, they didn’t arrest any of the patrons crammed inside chanting “get out,” nor did they issue any violation tickets.

Still, it’s too easy to blame police for these failures — they didn’t craft the public health
orders or set the emergency rules on how to enforce them. They are being asked to execute vague language, on an inconsistent basis, on top of all the other crises they have to respond to on a daily basis, like calls related to homelessness and overdoses.

“We will continue to work with our partners at the City, Vancouver Coastal Health and the Restaurant and Foodservices Association moving forward on this matter,” said Vancouver police spokesperson Const. Tania Visintin.

Trust in government on a “downward trend”

The display of defiance by the restaurants and the frustration of the public in watching it all play out, contribute to the general trend of eroding public trust in our public institutions, said Azim Shariff, a social psychologist and associate professor at the University of BC’s Department of Psychology.

“The polls have shown a downward trend, in terms of Canadian trust in government,” he said.

“They are still pretty high, but as this has dragged on, as this has gotten worse when people thought it would get better, and as the vaccine rollout has been slower, and as we’ve lost the ability to have this smug comparison to the U.S., all of this has caused us to have lost confidence. I don’t know if that’s justifiable. Dr. Henry and (other officials) are in an extremely difficult place.”

Research has shown when people trust the decision-makers in government they tend to be happier, more resilient and more compliant with the rules, said Shariff.

That’s faltering a bit in BC, as the province is rocked by the third wave of COVID-19 and the new wave of restrictions.

Still, officials could bolster it by committing to more transparency on data and decisions,
said Shariff.

One place to start: Being quick, consistent and tough in enforcing the public health
rules.