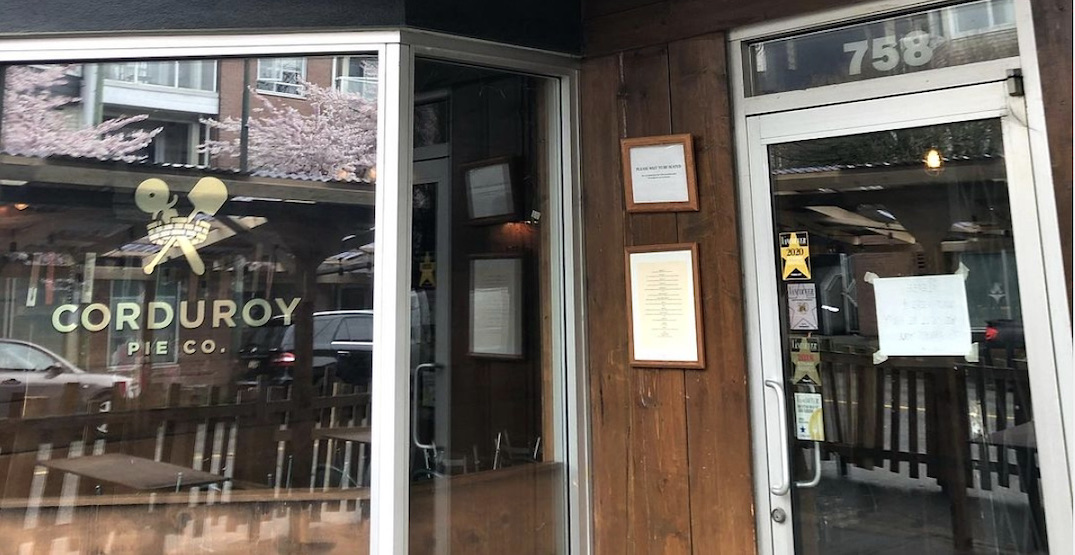 The W 16th Avenue restaurant is partially owned by the Corduroy Restaurant owners, who defied British Columbia’s current ban on indoor dining over the weekend.

Corduroy Pie Co. said it has been adhering to all COVID-19 requirements and following provincial guidelines since March 2020 when the pandemic began.

A video making the rounds over the weekend showed the inside of Corduroy Restaurant on Saturday, filled with people. Two health inspectors from VCH speak to one of the restaurant’s owners, who tells them that they are “trespassing on [her] private property.”

Patrons inside the restaurant repeatedly chant “get out!” until the two inspectors leave. The Vancouver Police Department’s (VPD) Liquor Coordinator also attended the restaurant after police received several complaints throughout the day.

The Corduroy Restaurant faced criticism from Ian Tostenson, president and CEO of the BCRFA, who said the industry “needs to stand together,” adding that there’s no place for these kinds of actions.

On Monday the City of Vancouver suspended the Corduroy Restaurant’s business licence until April 20, 2021, a date that coincides with the province’s ordered suspension of indoor dining for all BC restaurants.

This suspension followed Closure Orders from Vancouver Coastal Health for failing to comply with PHO orders.

Corduroy Restaurant owner Rebecca Matthews responded to the events of the weekend on Instagram, later posting the eatery would be “closed until further notice,” although it’s unclear if that means they’ll just be complying with the suspension of their business licence.

Daily Hive has reached out to Matthews, Corduroy Restaurant, and Corduroy Pie Co. for additional comment.