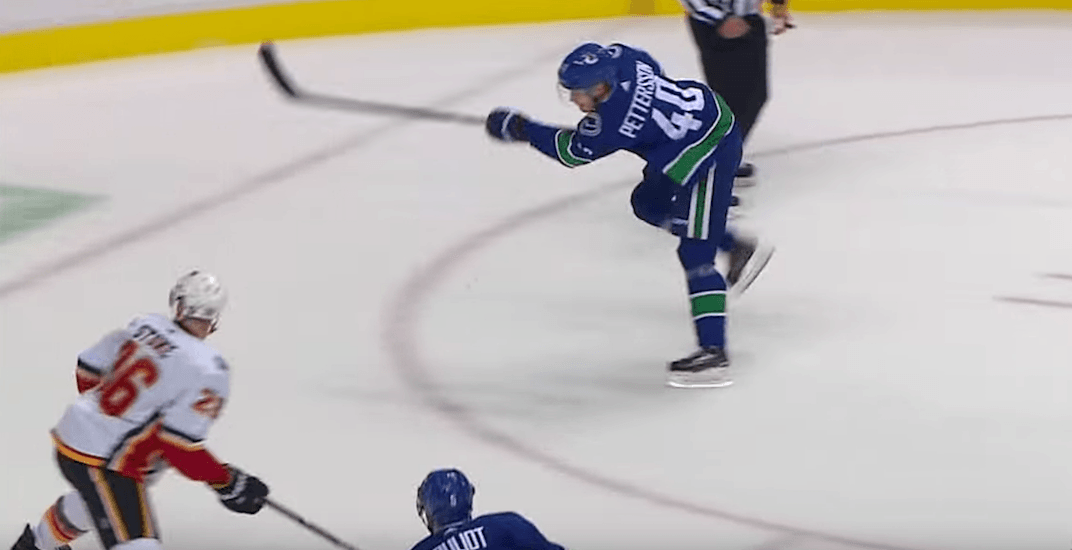 Welcome to the NHL, Elias Pettersson.

The Vancouver Canucks’ prized 19-year-old rookie entered the National Hockey League in style on Wednesday, scoring on opening night in a 5-2 win over the Calgary Flames.

Flying down the right wing on a 2-on-1, the young Swede looked off Derrick Pouliot and let go a wicked wrist shot that went in and out of the net so fast, you may have thought it hit the goal post.

“I was thinking he was passing it the whole time, praying that he’d shoot. And he did,” said head coach Travis Green in his post-game media conference.

“A goal like that, it’s one to remember,” Bo Horvat told reporters. “Elias was big tonight.”

Pettersson’s reaction on the bench afterwards, with fans giving him a standing ovation, was priceless.

How did that standing ovation sound, Elias? 😎 pic.twitter.com/WfmH49clsB

All that was missing was a wink to the camera.

“I didn’t expect a standing ovation from the crowd, that was amazing.”

Despite receiving just 9:46 in ice time, Pettersson was deserving of being named the game’s first star. The young centre was responsible defensively and didn’t look overmatched anywhere except the faceoff circle (he was 3 for 9 on draws) despite his much talked about slight (6-foot-2, 176-pound) frame.

Elias Pettersson scored the @Canucks 1st goal of 2018-19 Wednesday night & in the process became the 3rd youngest VAN player to pot one in their very 1st career NHL game pic.twitter.com/VDbtZXCKRV

Pettersson also added an assist in the game, setting up Nikolay Goldobin for a highlight-reel goal to give the Canucks a 2-0 lead in the third period.

What does he have for an encore? We’ll find out in the second game of the season, in Calgary, on Saturday night.