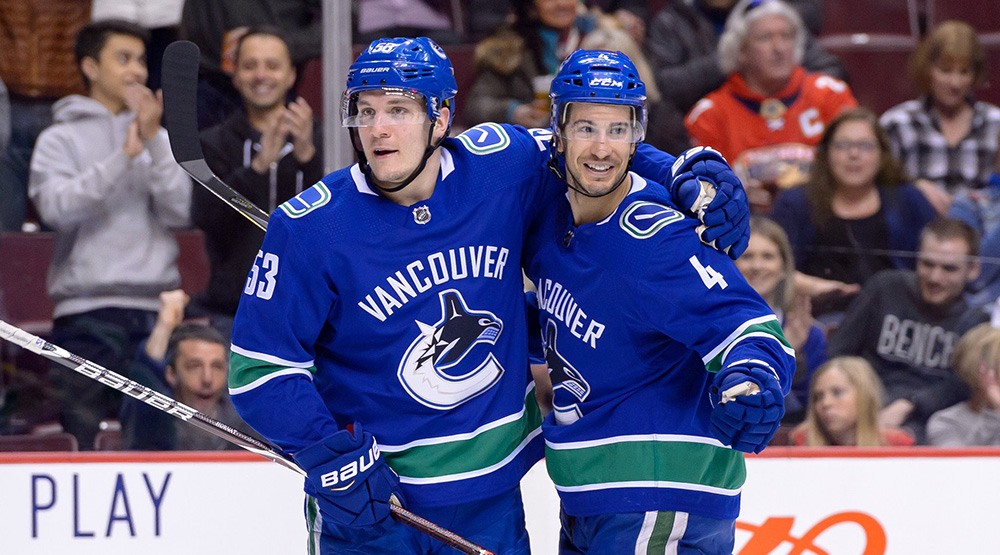 Forget about the captaincy issue, Elias Pettersson, or their 1-6 preseason record.

The hot-button issue concerning the Vancouver Canucks heading into their season-opener at Rogers Arena on Wednesday concerns video games.

Bo Horvat probably had no idea what kind of controversy this would become when he told TSN 1040 that players were putting a stop to playing Fortnite, or any other video games, on road trips.

“That’s definitely a no-go on the road,” Horvat explained. “No more Fortnite. No more bringing your video games on the road. It’s strictly team meals, team dinners, and hanging out with the guys. So we’ll have to put an end to that.”

Horvat went on to call Fortnite a “waste of time” and said there are better ways to spend your time on the road.

This issue first rose to prominence in hockey circles when Jeff Marek reported that a prospect was having his career derailed by an addiction to Fortnite.

Here’s what he said:

“On video games – and I’m not going to say the player’s name. I really doubt he’s going to make it to the NHL, and it’s because of a video game addiction, to the point where his junior general manager told me that they’ve had him go to counselling over it, because he’ll play until all hours of the night and into the morning and then he’ll have no energy the next day. Like, he’ll be a write-off. And it is that bad. He has this compulsion for playing video games until all hours. I swore that I wouldn’t say the player’s name, but it’s unfortunate. He’s a recent first-round draft pick for a very, very prominent NHL team, will probably never play in the NHL because of a video game addiction.”

Michael Del Zotto hinted in training camp that the Canucks might do something to put a stop to it.

With the new age we’re in, Fortnite/video games became a big talking point around some vets and younger players. Chatted with Michael Del Zotto on the subject…I do know for a fact this is becoming an issue league wide. pic.twitter.com/jZpP7C7XTY

Not everyone agrees that video games are the Boogie Man, of course. Sure, some players may get addicted and take it too far, but teams aren’t banning alcohol.

In moderation, there shouldn’t be a problem.

That’s why a number of people think Canucks players have overreacted to this problem.

That includes Winnipeg Jets winger Patrik Laine, who wasn’t shy in sharing his opinions on the issue.

The 20-year-old superstar, who somehow managed to excel as a hockey player while enjoying video games as a hobby, called it a “terrible idea,” before poking fun at the Canucks.

“I think [the Canucks] just needed something to blame after last year,” said Laine. “We made a deal, that if we’re playing like [the Canucks did last season,] we can give up our Playstation… but I don’t think that’s going to happen.”

Canucks players were asked to respond to Laine’s comments after the morning skate.

Reaction to Laine’s comments in #Canucks room –
JV18 – “Whatever, I don’t care what he says.”
BH53 – “We have a home opener tonight to worry about I’m not going to sit here and talk about video games.”

“Whatever, I don’t care what he says,” said Jake Virtanen.

“We have a home opener tonight to worry about, I’m not going to sit here and talk about video games,” Horvat added.

🎮 We do not endorse the @Canucks' decision… 🤣 #NHL19 pic.twitter.com/s8U2yLSvrh