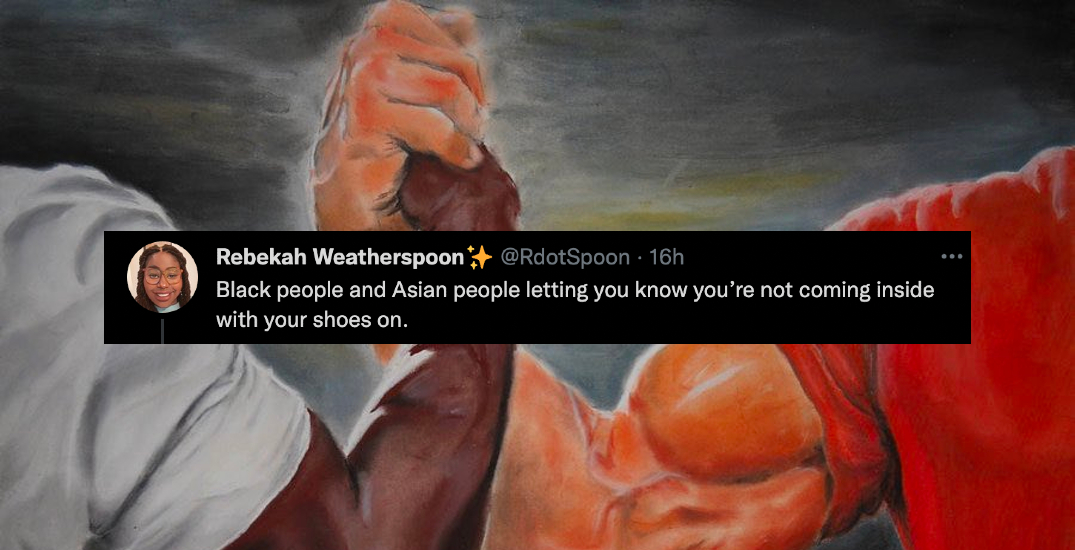 A Wall Street Journal contributor is facing the music for writing about keeping her shoes on in other people’s homes, even if they don’t want her to do so.

In an op-ed titled, “Here’s Why I’ll Be Keeping My Shoes on in Your Shoeless Home,” self-described humour columnist Kris Freiswick wrote about why she’s entitled to keep her shoes on.

“Why are you assuming that your guests’ shoes are dirtier than your floors?” Freiswick attempts to reason in the post, unaware that a full-blown mass rebuttal was in order for her on Twitter.

The article put off a ton of readers, many of whom are BIPOC and believe that wearing “outside” shoes in the home is unhygienic and often disrespectful to the host. Some also pointed out that the language of the post itself bordered on racist.

if i ask you to remove your shoes in my home and you refuse because it offends your sensibilities i will personally dropkick you out of the front door like i’m uncle phil and you’re jazzy jeff pic.twitter.com/CvcDVk2T9v

This tweet best sums up what was in store for the writer.

I hope this writer and the Wall Street Journal are ready for the entire nonwhite community to absolutely destroy them in the QRTs pic.twitter.com/fbtgb5afhl

This is seriously an anti-Asian piece… pic.twitter.com/BG7wBA4TZT

Seriously, just get house slippers if you’re so inclined.

If you don’t wanna take your shoes off in my house, you can stay outside and talk to me through the window 🤗 https://t.co/3pG7lZUGl8

if i’m going to extend hospitality to you literally the least you can do is take your nasty shoes off ❤️ pic.twitter.com/Lsy5KMKHPx

The writer may have unknowingly helped establish interracial solidarity, so props for that, I guess.

Black people and Asian people letting you know you’re not coming inside with your shoes on. pic.twitter.com/pW9wvoNgQy

If someone told me they think my floor is too unhygienic to take their shoes off they will be asked to gfto, and then I’ll phone their mom to inform them they were not raised right. pic.twitter.com/Jxuut9djBt

And ultimately, the writer was banned from hundreds of households.

Here’s why your gross ass isn’t coming into my house. https://t.co/ZPhl5NaI7j

What would you do if someone insisted on keeping their shoes on in your home?