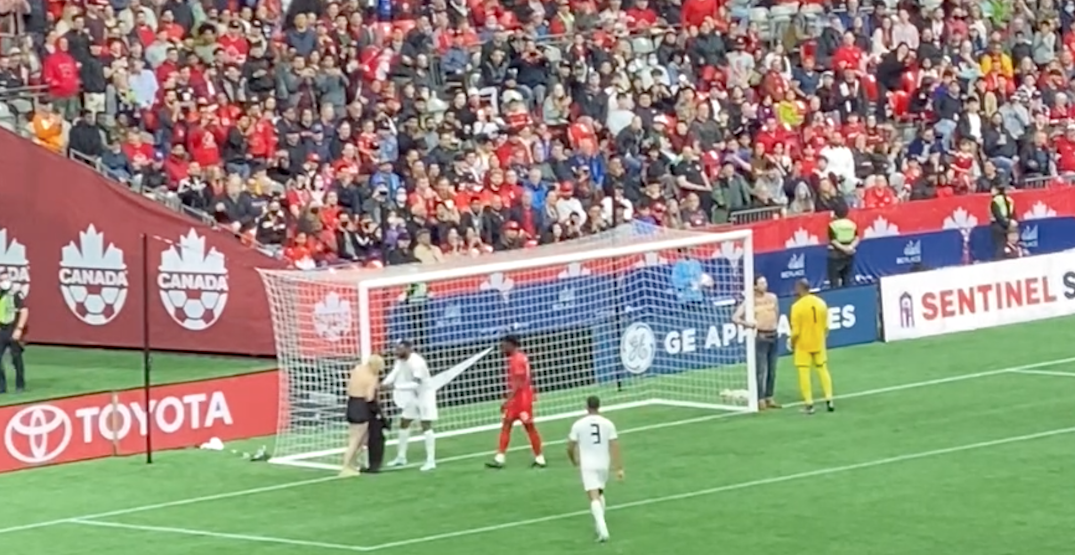 After two match cancellations, the Canadian men’s national soccer team finally played a match at BC Place in Vancouver on Thursday.

Canada beat Curaçao 4-0 in front of 17,216 fans, but it wasn’t without interruption.

A man and woman halted play in the second half when they walked onto the field, partially disrobed, and tied themselves to the goal posts.

Two people tied themselves to the goal posts during the Canada match pic.twitter.com/VmavzDHum6

The pitch invaders were completely untouched by BC Place security, which somehow missed them sauntering onto the pitch at a snail’s pace.

Security appeared to be up to the players on the pitch for a moment, with Alphonso Davies and a few Curaçao players in close proximity.

“I didn’t say anything [to the protesters],” Davies said after the match. “I told the Curaçao guy to just leave them.”

The pitch invaders appeared to be protesting against logging of old-growth forests and raising awareness about climate change. Both the man and woman had “1022 days left” written on their bare chests, with “Save Old Growth” stickers covering their nipples.

A climate activist interrupted a Roland Garros semifinal by chaining herself to the net with a powerful message. Time is running out. Let's act while we still can. pic.twitter.com/Wd9smrwS2P

The “1022 days left” message was similar to a protest at the French Open in Paris last week. Save Old Growth protesters, meanwhile, have also used a strategy of disrupting infrastructure, as a way to demand the BC government end old growth logging.

“Protecting our last remaining old growth forests is a complete no-brainer. We’ve been systemically lied to by the BC government,” said Zain Haq, coordinator for Save Old Growth. “Through our civil resistance efforts, we’ll create political urgency for the government to represent the will of the people rather than serve the forestry lobby.”

The protesters were greeted with a chorus of boos from fans, while they delayed the match for about five minutes. Once they were ushered off the field by security, the match resumed as normal.

Alphonso Davies scored two goals in his first match at BC Place since 2018, when he was a member of the Vancouver Whitecaps. Centre-back Steven Vitória and current Whitecaps striker Lucas Cavallini scored the other goals for Canada.