Public speakers representing the interests of Simon Fraser University (SFU) students and residents of Burnaby Mountain made a plea on Monday to Burnaby City Council to support TransLink’s proposal to build a gondola transit line solution reaching the mountaintop.

During the public meeting, Gabe Liosis, the president of the Simon Fraser Student Society, suggested passenger volumes on the buses reaching the top of Burnaby Mountain have returned to pre-pandemic volumes, with long wait times and overcrowding.

A gondola replacing the No. 145 bus from SkyTrain Production Way-University Station would provide long-term capacity exceeding the 99 B-Line and offer frequent service throughout the day, eliminating uncertainty and waits.

It would also ensure the continuity of accessibility to the campus and neighbourhood during snowfall events, which result in the cancellation of classes when buses are unable to make the trek up slick mountain roads.

“These are issues that we can’t continue to look over anymore,” said Liosis.

“So in the face of the current transit system’s downfalls, it is unquestionable why the undergraduate and graduate students, and SFU community as a whole, are vibrantly excited about the Burnaby Mountain Gondola proposal.” 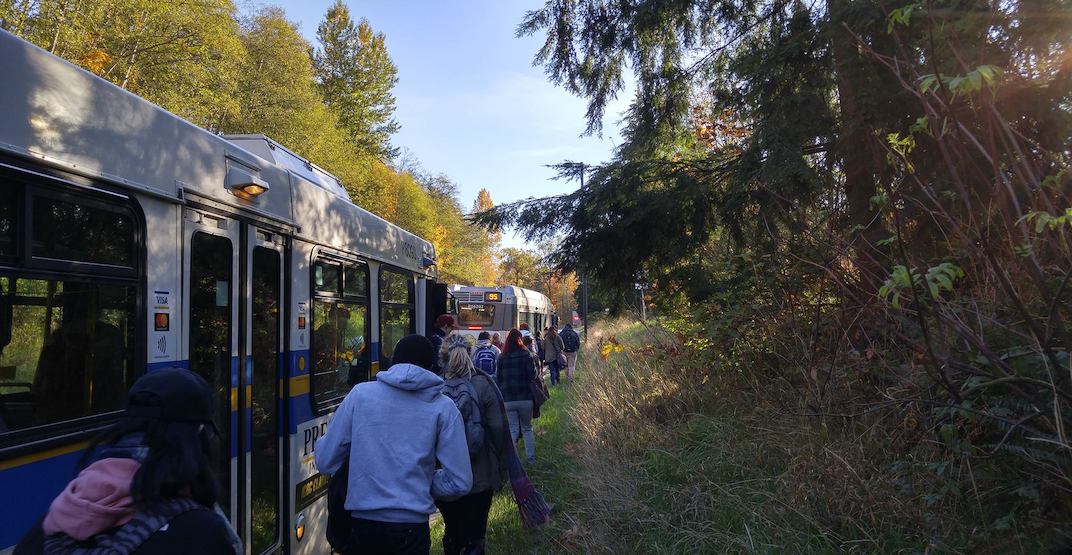 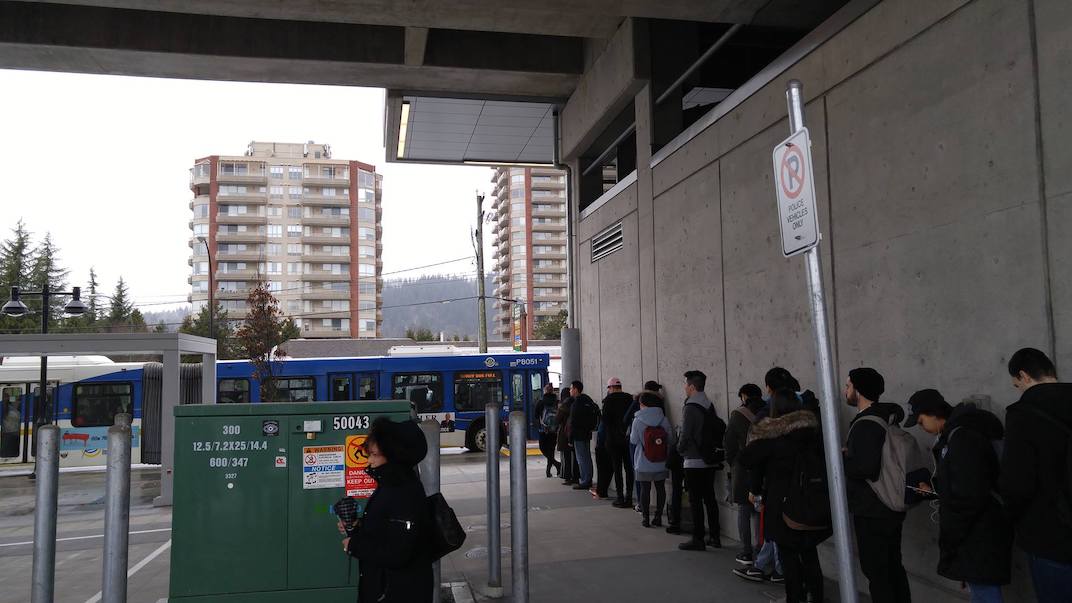 Long lines for a bus at Production Way-University Station. (Build the SFU Gondola)

Liosis also addressed some suggestions by residents of the Forest Grove neighbourhood — located mid-way between Production Way-University Station and Burnaby Mountain — who are opposed to the gondola and want to see the use of electric-battery buses instead to reduce the frequency of bus mechanical breakdowns.

“The gondola is the most viable option we have at this time. Replacing diesel buses with electric buses is not going to solve the issues we have with overcrowding and reliability. Our community is growing rapidly.”

He says the reliability and time savings of a gondola would “create a fundamental shift in the quality of life” for students.

Mario Guisado, president of the UniverCity Community Association, the organization representing the residents in the growing high-density UniverCity neighbourhood on the eastern side of the mountaintop, added that the community “feels underserved by the City of Burnaby because it is looped in with students and the university.” He says many residents also commute off-mountain daily for work.

Ridership demand to Burnaby Mountain is expected to grow, with student enrolment reaching 19,400 and employment reaching 9,300 in 2035. Furthermore, the UniverCity resident population is expected to expand from 6,000 to 9,500 upon the full buildout of the neighbourhood.

City council did not ask the speakers any questions following their remarks, but Mayor Mike Hurley told them, “We’ll get a decision on this quickly as we can.”

Sometime over the coming months, certainly before the October 2022 civic election, city council is expected to make a decision on the recommendations of city staff and TransLink staff on whether the municipal government supports the gondola, and if so, which route should be selected for further detailed planning towards implementation.

TransLink staff have indicated Route 1, offering the direct, straight line route from Production Way-University Station, with the shortest travel times and lowest operating and construction costs, is the preferred route. This follows TransLink’s Fall 2020 public consultation, which saw an overwhelming 85% of about 7,500 respondents support Route 1.

All gondola options would provide frequencies of up to less than a minute during peak times, with each cabin holding a capacity of about 30 passengers. It would be similar to Whistler Blackcomb’s Peak to Peak gondola, using a 3S tri-cable system for enhanced safety, redundancy, and speed.

Route 3 is the longest, has the highest impact on green spaces, and is within very close proximity to the Trans Mountain tank farm.

However, based on previous comments made by city council earlier this year, the selection of Route 1 is not guaranteed, with some councillors giving extra consideration to the concerns of Forest Grove residents.

After city council arrives at a decision, it will then be sent to TransLink’s Mayors’ Council for final approval. The project is currently unfunded, but it would be built relatively quickly, with a construction timeline of only about 18 months.