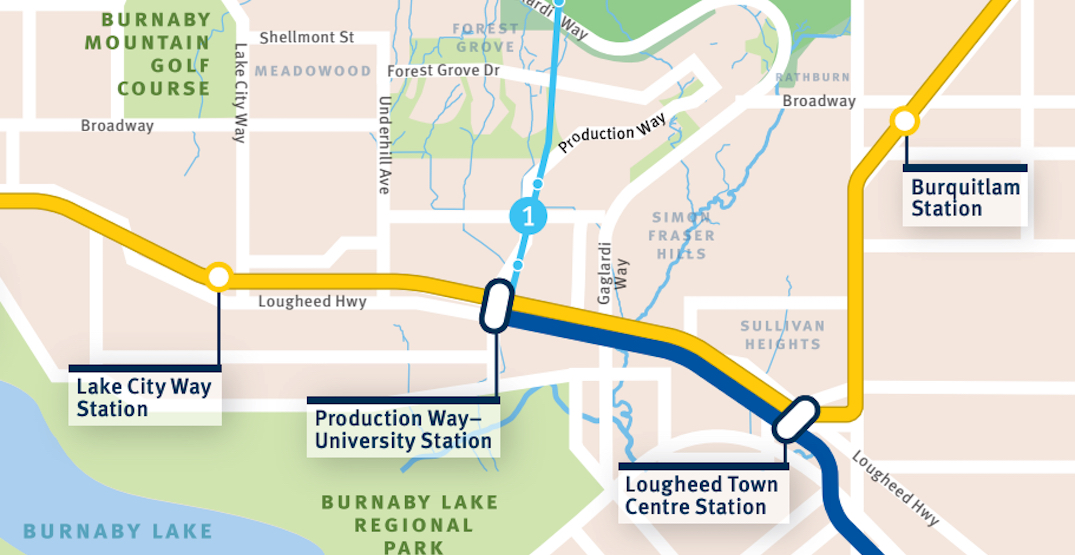 There is clear support amongst local and regional residents for the Route 1 option for the Burnaby Mountain Gondola public transit line between SkyTrain’s Production Way-University Station and the Simon Fraser University (SFU) campus.

This also happens to be the direct, straight-line route option with by far the shortest travel time of six minutes.

According to TransLink, nearly 7,500 responses were received for its second round of public consultation, conducted late last year, that specifically sought feedback on three route options.

Across the region, an overwhelming 85% of respondents supported Route 1, while there was limited support for the lengthier, angled routes of Route 2 (19%) and Route 3 (12%), which have a longer travel time. Route 3 starting from Lake City Way Station would also require an additional transfer to the Millennium Line at Production Way-University Station for passengers taking the Expo Line.

Both routes 2 and 3 provide the gondola with a central location for the mountaintop terminus, while route 3 lands on a green space downhill from academic and residential areas.

Route 1 has the lowest construction cost of $210 million, and the lowest annual operating cost of $5.6 million, which is 30% lower than the two bus routes it would replace — No. 145 Production Way–University/SFU, and No. 143 Burquitlam/SFU. The No. 145 has a travel time of 15 minutes in optimal conditions.

As well, Route 1 has by far the smallest environmental footprint on the area’s forested parks and green space, and requires a significantly smaller number of tree removals compared to the other two options.

Trans Mountain also indicated it has concerns with the safety and security of Route 3’s close proximity to its Burnaby Mountain tank farms. Routes 1 and 2 on the other hand are deemed to be within a safe distance from the oil storage tanks.

There are similar proportions of support amongst Burnaby residents, with 74% for Route 1, 20% for Route 2, and 15% for Route 3.

Amongst UniverCity neighbourhood residents at the SFU campus, 89% support Route 1, while just 25% and 13% support routes 2 and 3, respectively.

“We’ve reconfirmed that this is a really promising project and a solution for the capacity and reliability and other challenges of this particular corridor, and for serving the important destination of SFU,” said Jeffrey Busby, the project director and acting vice-president of engineering for TransLink, in an interview with Daily Hive Urbanized.

“What our finding is that should this project be implemented, route 1 makes the most sense.”

Route 1 even had the most support amongst the residents of the Forest Grove neighbourhood, which would see two multi-family residential buildings impacted by the gondola’s aerial line. The consultation indicated 30% of Forest Grove respondents support Route 1, 23% for Route 2, and 21% for Route 3. 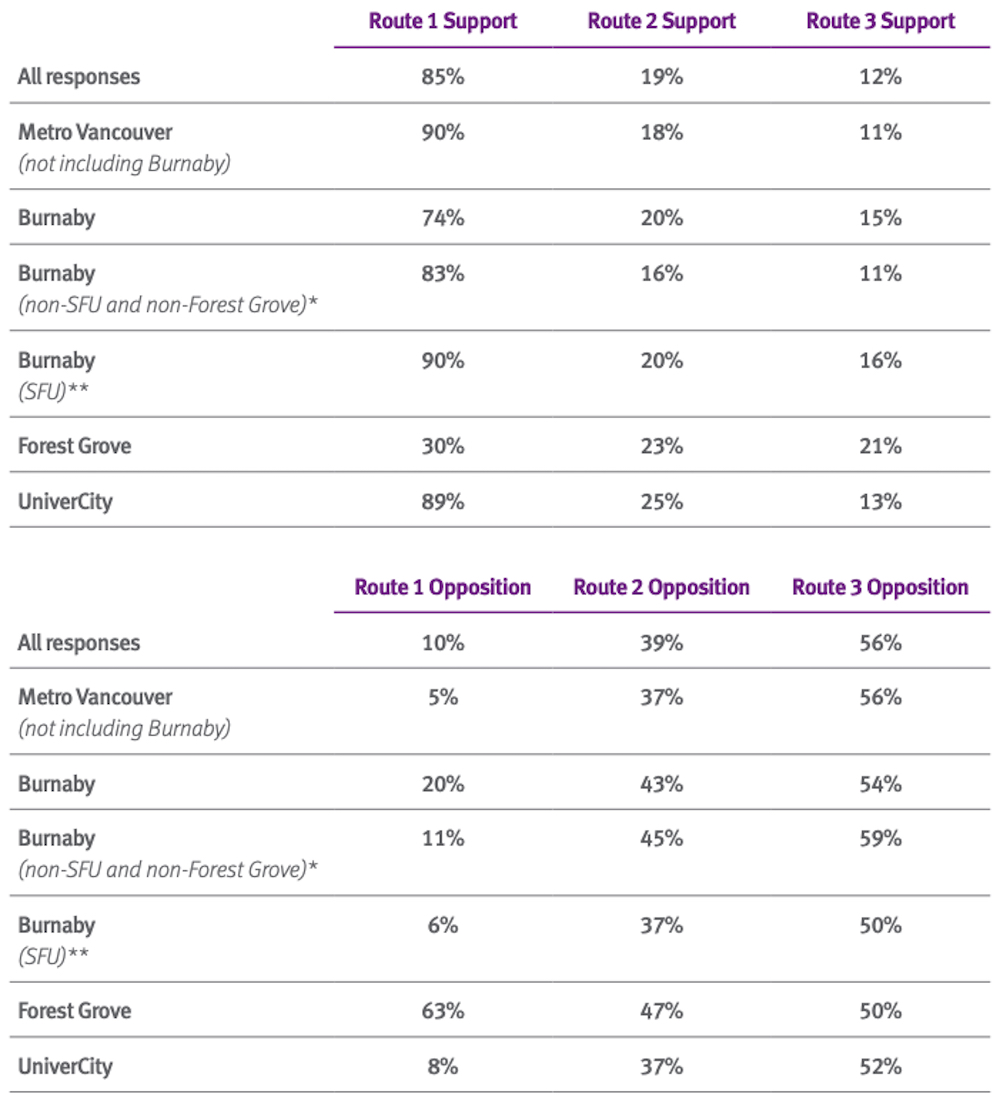 Although public support for Route 1 is clear, the final decision on the route selection for possible implementation lies with Burnaby City Council. There is no established timeline for this process, but a preferred route identified by the municipal government would also require the formal approval of the Mayors’ Council. The project is also currently unfunded.

“This project is not in our current plans to be implemented, it is a candidate project for implementation,” said Busby. “TransLink is not seeking to implement a project that does not have the city’s support.”

If the project receives approvals and funding, the public transit authority would then develop a detailed business case to further refine costs and design.

The gondola system would be built to support an ultimate capacity of 3,000 passengers per hour per direction (pphpd), which is comparable to the peak hour capacity of the 99 B-Line. It would use up to 20 cabins, each with a capacity for about 35 passengers — similar to cabins used on the Whistler Blackcomb Peak to Peak Gondola. Cabins could run as frequently as every one minute or less.

In strong contrast, the existing buses can move up to 2,000 passengers per hour, based on the highest frequency of every 2.5 minutes, which is the amount of time it takes for passengers to unload and load at the terminuses.

Unlike the single-cable Sea to Sky Gondola, the Burnaby Mountain Gondola would use a 3S system composed of three cables for additional stability and enabling safe operations in winds of up to 100 km/hr. It would be equipped with a weather monitoring system to keep operators aware of weather and wind conditions.

Strong security measures to prevent the incidents that occurred on the Sea to Sky Gondola could include physical barriers, gates, and locks at the towers, the incorporation of unclimbable, tubular structures around the towers, and the placement of maintenance ladders inside the towers with lockable doors. All of this would be monitored by a security system. 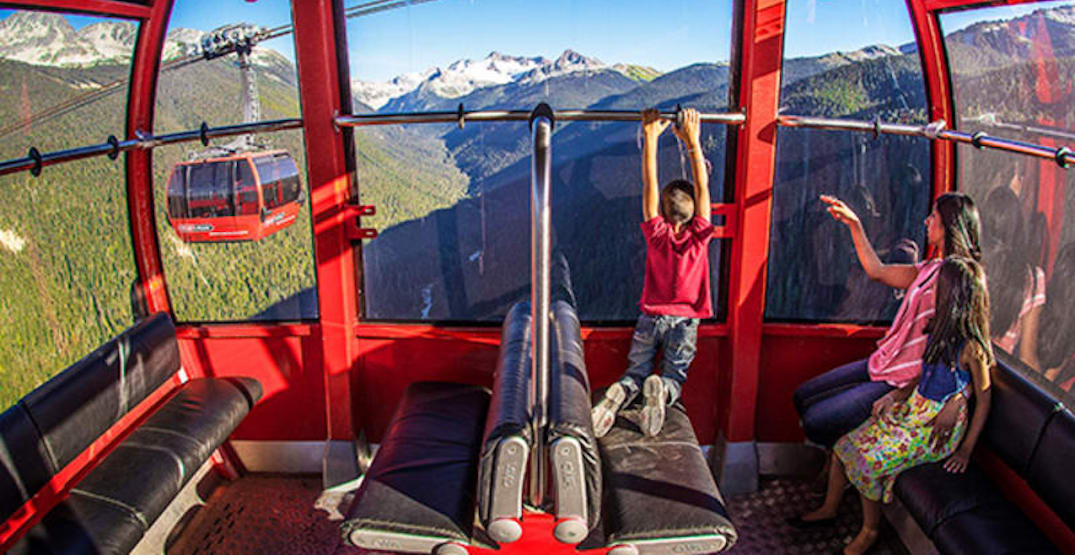 Inside the cabins, there could be CCTV monitored by staff for onboard safety and security, as well as interior call buttons and intercoms.

The gondola has been seen as an alternate route off the campus and mountain in the event of a major incident, such as a tank farm explosion and forest fire. Currently, there is just one road down from the top of the mountain.

In 2019, an average of 25,000 daily trips were made by transit to SFU Burnaby. While much of this is from student trips, and the gondola’s short travel time and reliability would have a material benefit for students, Busby notes the ridership potential is also from staff, employees, the growing UniverCity population, and tourism.

Student passenger volumes decrease in the summer, but this could be offset by an increase in tourists during this period, similar to SeaBus.

“We met with Burnaby Chamber of Commerce, they see this as something that could really support the city in its economic and tourism aspirations. The market for travel to and from SFU is larger than the student population,” added Busby.