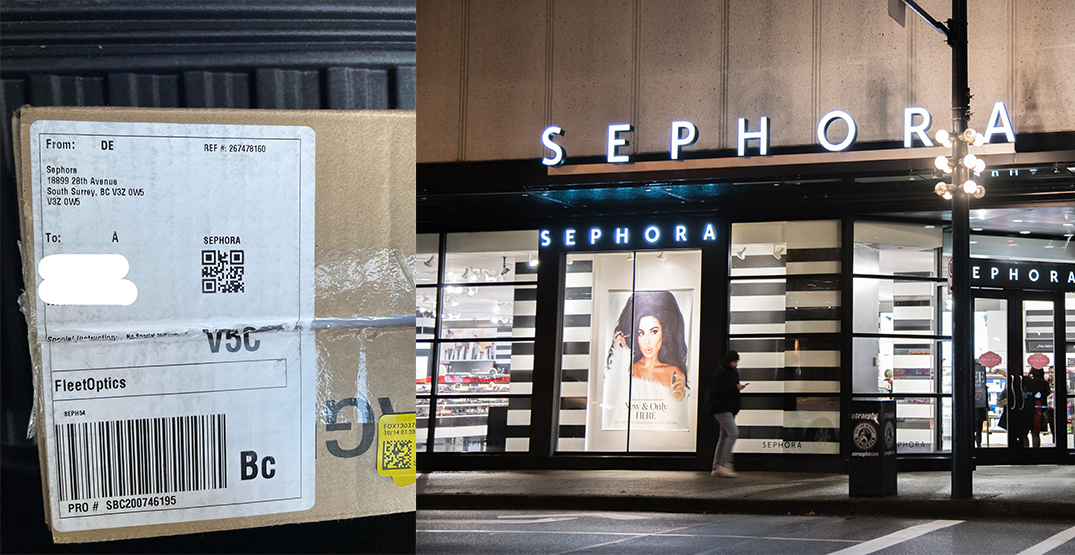 A Metro Vancouver woman had to track down and retrieve her $1,400 Sephora package herself this month after it was mistakenly delivered to a nearby Costco, and she’s questioning why neither the retailer nor the courier rectified the situation.

Wendy Yang placed the large order on October 8, hoping to buy Christmas gifts for her mother, sister, and other family members all at once. She’s used the Sephora app to place orders before and didn’t anticipate any problems — especially since her building has a 24-hour concierge and dedicated package pickup room.

But on October 12, she realized she had forgotten the unit number and phoned Sephora. The retailer told her they’d pass the information to the courier.

On October 14, Yang got a notification that her package had been delivered, and someone had signed for it. She thought that was strange because she was at work and couldn’t find the box at her door, in the mailroom, or with the concierge.

She contacted Sephora about it, showing them the pictures of her ID to prove the signature for the package was different. She also sent Compass Card time stamps to show she was on the bus when the items were delivered.

The beauty retailer said it would look into it but ultimately told Yang it would not issue a refund or re-shipment because someone had received and signed for the package.

“I started to panic because it’s quite a bit of money,” Yang told Daily Hive. 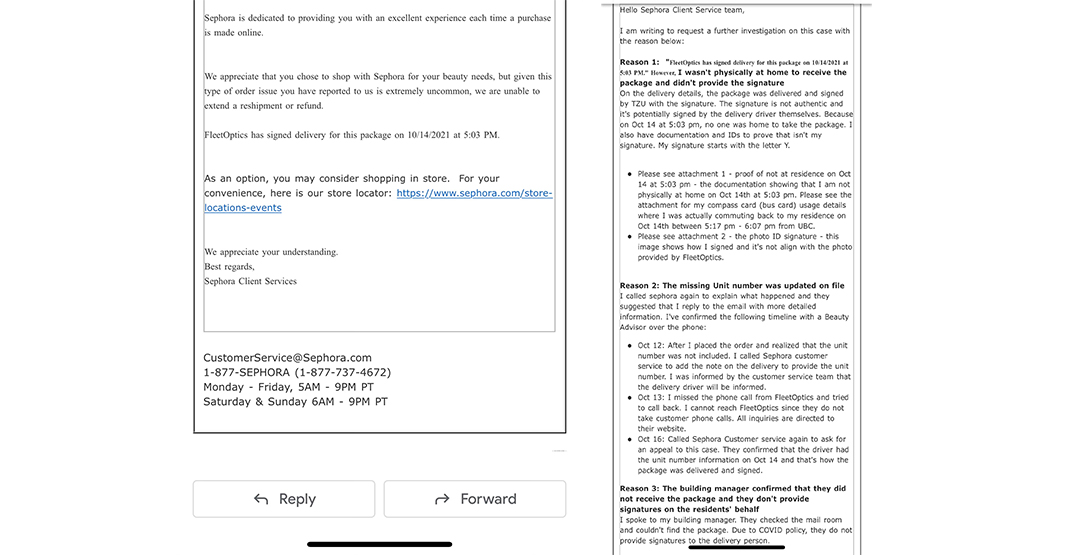 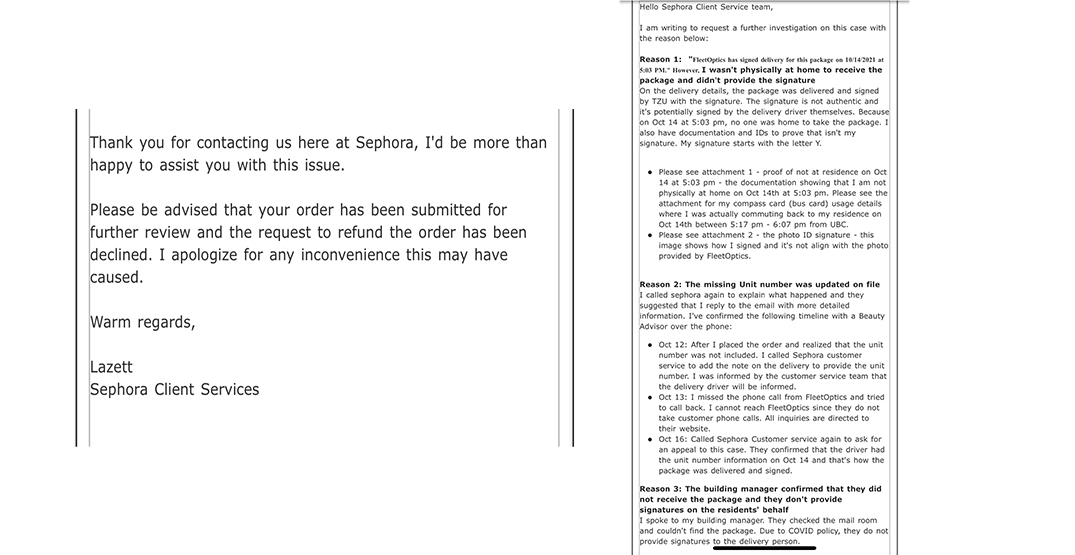 Yang also reached out to the courier, Fleet Optics, which was not taking phone calls due to the pandemic.

In the meantime, Yang posted in a neighbourhood Facebook group about the conundrum. A man with the same last name as her reached out, saying he’d seen the package at work — the Costco regional office at 4500 Still Creek Drive, just down the street from Yang’s building.

FleetOptics agreed to send a manager to collect the package, but the worker spent half an hour at Costco and couldn’t find the office. FleetOptics declared the package not present. 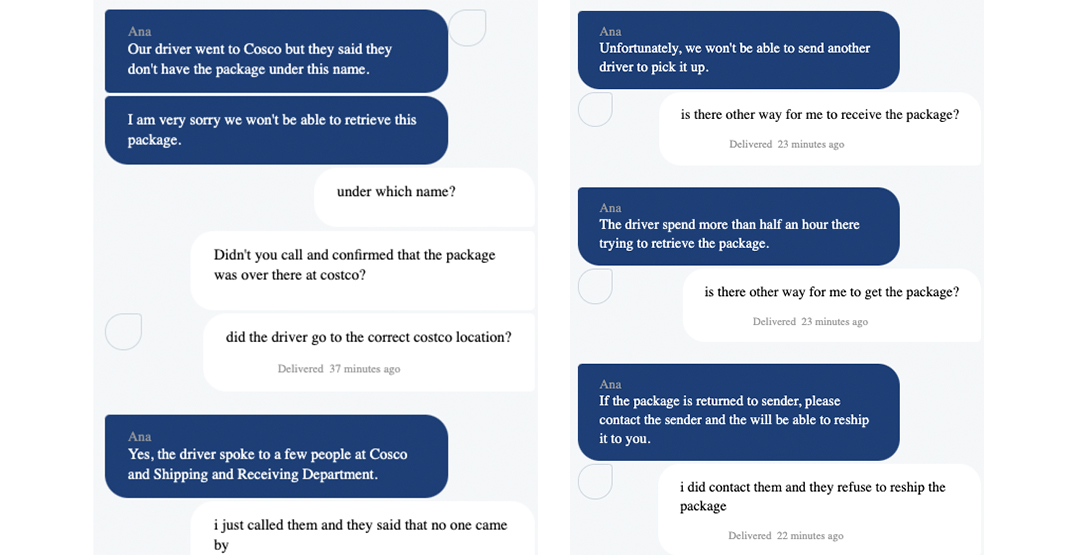 Meanwhile, Costco told Yang they would return her package to the sender the following day if no one came to retrieve it.

Yang urged Fleet Optics to send someone else, and she arranged to meet the second courier manager at the Costco office at 8:30 am on October 19.

Yang arrived at the office with her husband, and once again, the receptionist wouldn’t release the package. The couple waited outside.

“Why can’t you give the package to me. I have everything to prove that’s my property,” Yang told Daily Hive, recounting her frustration.

At the same time, the Fleet Optics worker texted Yang, saying he wouldn’t make the 8:30 am appointment.

She was ready to call the police for help when the Costco manager arrived. He was confused about how the package ended up in their office, but he checked Yang’s ID and gave her the parcel.

“It was that simple,” she said. “So ridiculous. From the start to the end, Sephora refused to handle this.”

Fleet Optics managing partner John Mann confirmed that the driver had a delivery going to the Costco next door to Yang and incorrectly dropped her package there. He added the driver has received coaching about what happened.

“As much as this customer was inconvenienced, and we are truly sorry, rest assured our customer service team jumped on this right away, and our regional manager personally drove to Costco to help rectify this,” Mann told Daily Hive. “Unfortunately, he was a little late to arrive at the coordinated time, but the customer was able to retrieve the package.”

Sephora did not respond to Daily Hive’s request for comment, and Costco declined to comment for this story.

Tatiana Chabeaux-Smith, the spokesperson for Consumer Protection BC, said the organization wants to know about when businesses deny refunds for non-delivered goods.

Consumers enter into distance sales contracts when they purchase items online and have the right to cancel or refund if the goods are not delivered within 30 days of the supply date.

“If there’s an issue with the delivery of the package, the business must be able to prove the package was delivered or that they provided reasonable notice of delivery, so the consumer has an opportunity to receive the package,” Chabeaux-Smith said.

Customers can only be expected to retrieve their items from an alternate location if they weren’t home during the attempted delivery. Even then, the business must disclose where the items will go and prove the package was delivered there — if not, Chabeaux-Smith said the customer is entitled to a refund.

She encouraged BC consumers to make use of official order cancellation and credit card charge reversal forms. She added people who are denied refunds from their credit card provider could contact Consumer Protection BC.

Yang is sharing her story because she’s frustrated with the lack of accountability on Sephora’s part, especially as more people shop online during the pandemic. The only way she’s found to lodge a formal complaint is via snail-mail letter to their head office.

When she started searching Sephora’s online community, she saw others posting similar stories. Yang went above and beyond to get her package because it cost $1,400. She thinks someone with a smaller order may just accept the loss.

“Even though they had all the information, they weren’t able to get the package themselves,” she said. “They weren’t willing to take responsibility. It’s you not doing your job.”