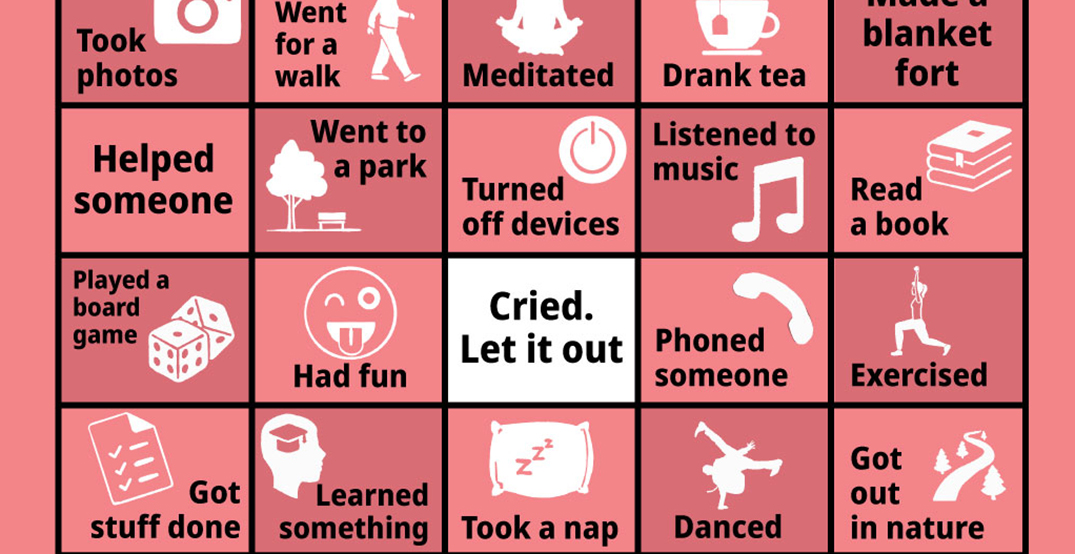 The BC Government addressed criticism of its self-care bingo tweet Friday, saying it “missed the mark” during the COVID-19 crisis that’s caused mental, emotional, and financial stress.

The government tweeted out a self-care bingo card around 12:30 pm Friday with squares offering suggestions such as going for a walk and meditating. But some squares were darker, including the free “cried. let it out” space in the middle.

Self-care can help manage some stress & anxiety during #CovidBC. Identify how you’ve taken care of yourself so far this week with the goal to complete a row, column, or diagonal. If you need more mental health support, find many free & low-cost options at https://t.co/GzV1bYrQlK pic.twitter.com/e2RnbfkbKn

Many called the tweet tone-deaf, and criticized the government for putting the onus on individuals instead of effectively managing the crisis itself.

I am sure this is meant well but tone deaf. You can’t medidate your way out of systemic issues that successive governments have failed to address. Consider the conditions that your essential workers toil in. Consistent with government messaging that we need to do more.

One person re-worked the bingo card to point out the governments perceived failings during the pandemic.

“Our post was meant to give people ideas of how they can take care of themselves and their neighbours and point them to free and low-cost mental health supports,” the government’s account tweeted later Friday evening.

“We’ve seen positive feedback, but also heard we missed the mark. We know there’s a lot more work to do to get through this — we’re committed to doing the work.”

We’ve seen positive feedback, but also heard we missed the mark. We know there’s a lot more work to do to get through this — we’re committed to doing the work. (2/2)