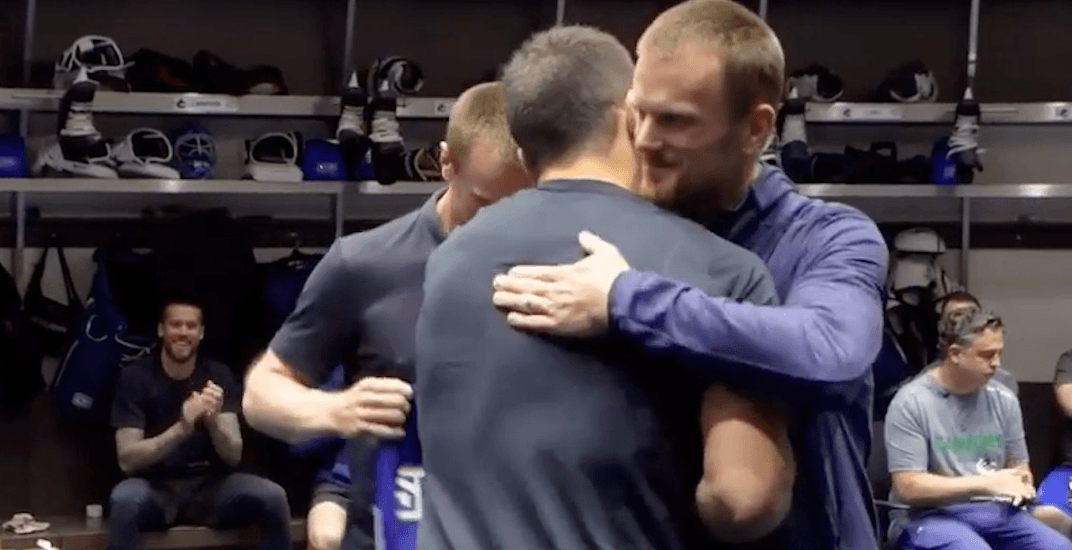 While fans had to wait until the home opener to find out who the new captain of the Vancouver Canucks would be, the players found in a private team meeting.

On October 1, before the team flew to Edmonton for the first game of the regular season, head coach Travis Green addressed his team.

But Green didn’t make the announcement. He saved that honour for a pair of Canucks legends, as Henrik and Daniel Sedin told the team that Bo Horvat would indeed be the team captain, handing him a new jersey with a C on it in the dressing room.

“It’s a great honour for us to be here today to announce the new captain of the Vancouver Canucks,” said Daniel. “[He’s] a guy that we have seen grow as a person from day one (when) he came in.”

“We know that he’s not going to change just because he is the captain,” Henrik added.

Horvat put on the jersey before addressing the team with his first speech as captain:

The Canucks went without a captain last year and for the first two games of this season, saving the big reveal for the home opener.

It was a big success, as a sold-out crowd at Rogers Arena gave Horvat a standing ovation before the team blew out the Los Angeles Kings 8-2. Henrik and the first captain in franchise history Orland Kurtenbach presented Horvat with his new jersey at centre ice.

“It was pretty surreal. It was actually pretty emotional,” Horvat told reporters after the game. “It was really humbling and a dream come true. Never in a million years did I think I’d be in this position. I couldn’t ask for a better group of guys in here… It’s a really special moment, one I won’t forget.”

Horvat’s family was in attendance, and he admitted that he felt nervous with the added pressure.

“I’ve known (about the captaincy) for a little bit now. [Management] talked to me in the summertime and made it official when I got back into town. I tried to keep it a secret as best I could.”