There won’t be a dry eye in the house on February 12 when the Chicago Blackhawks come to town.

That’s when Henrik and Daniel Sedin will see their numbers raised to the rafters at Rogers Arena, in what promises to be one of the most memorable nights in franchise history.

The Vancouver Canucks revealed ‘Sedin Celebration Week’ plans and more, as their 50th anniversary season schedule was released on Tuesday.

The Canucks will start the season on the road, playing the Edmonton Oilers on October 2 and Calgary Flames on October 5. The home opener is set for October 9 against the Los Angeles Kings – the same date and opponent as the Canucks’ first-ever game at the Pacific Coliseum in 1970.

Alex Burrows will also be honoured next season, as he joins the Ring of Honour. When exactly that will happen is still undetermined, as the team needs to wait for the AHL schedule to be released, as Burrows is now an assistant coach with the Montreal Canadiens’ affiliate in Laval.

The popular 1990s black skate jersey will make its triumphant return on January 4, appropriately against the New York Rangers.

The Canucks also announced a number of theme nights for next season, including the return of popular celebrations for Diwali (October 25 vs Washington Capitals) and Lunar New Year (January 18 vs San Jose Sharks).

Sedin Celebration Week includes a night to recognize four players who currently have their jerseys retired — Stan Smyl, Trevor Linden, Markus Naslund, and Pavel Bure — on February 10 when they play the Nashville Predators.

After the Sedins’ numbers are retired on February 12, the Canucks will recognize the twins’ off-ice contributions in the community during a matinee game against the Anaheim Ducks on February 16.

Here’s a look at all the theme nights: 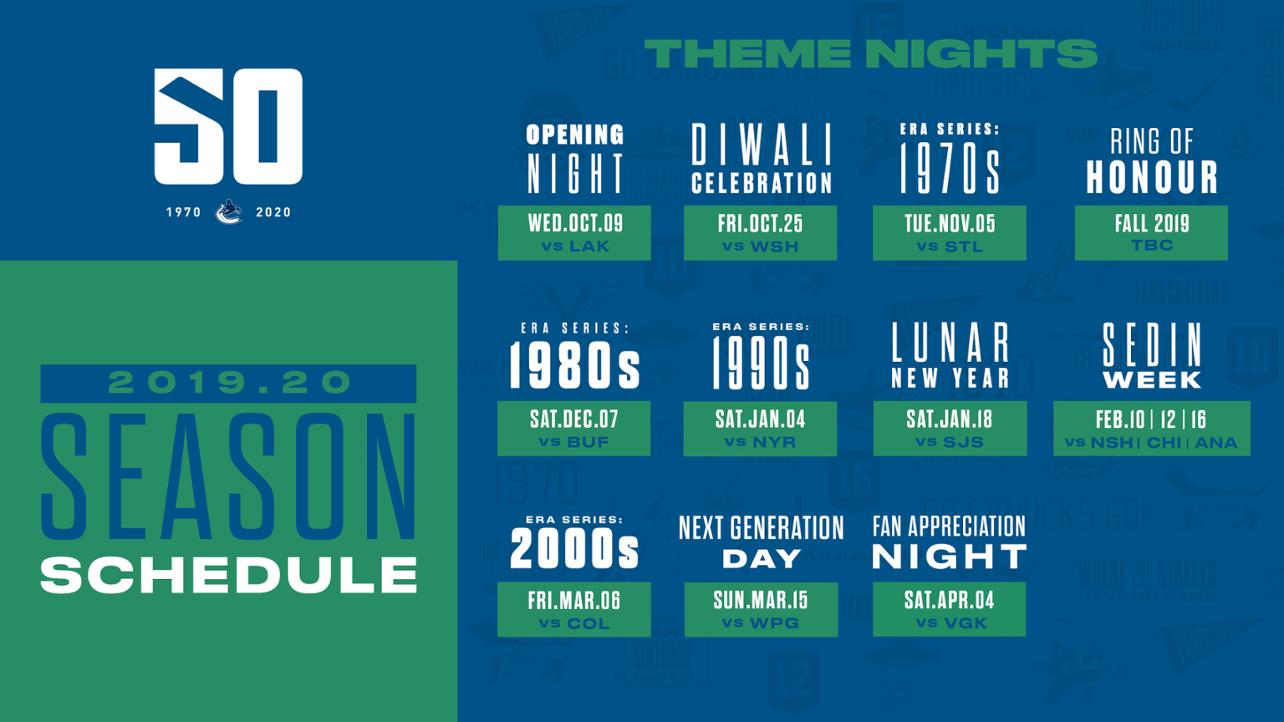 Tickets are not yet on sale, but the Canucks are offering a pre-sale opportunity for theme nights (including the Sedin jersey retirement night) that you can sign up for in advance.

Other fun facts about the schedule:

This year’s schedule is a huge improvement on last season’s in terms of allowing for rest.

On only one occasion will the Canucks return home to face a rested team. Last season, that scenario happened 11 times.

The Canucks will face a tired team at home on 11 occasions, which is 10 more than last year.