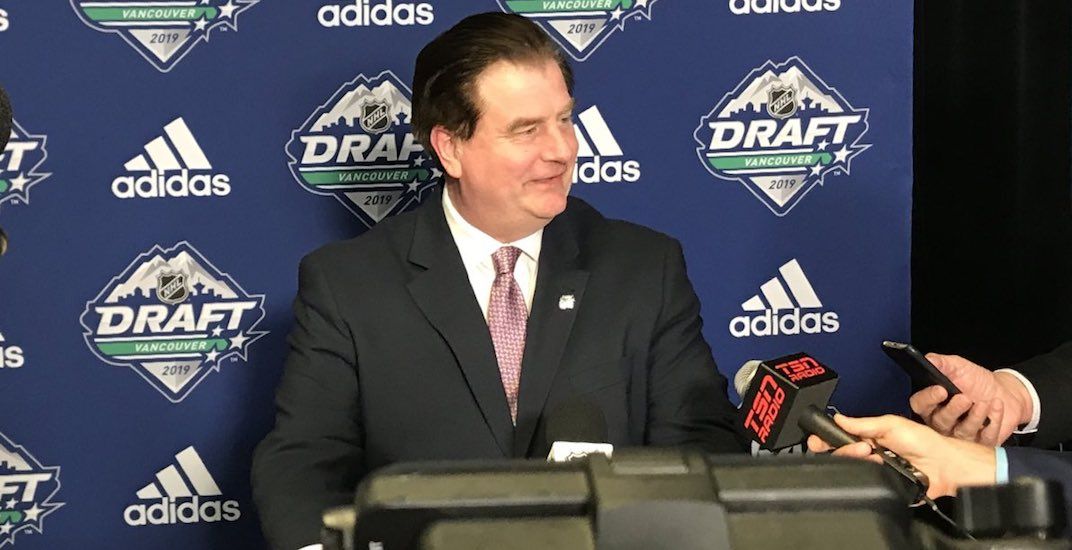 The Vancouver Canucks didn’t make a big splash as hosts of the 2019 NHL Draft like some expected, but they did make a trio of trades and added nine prospects for the future.

None of those prospects are likely to help the team in the near future, not even their first-round pick Vasily Podkolzin, who is under contract to his KHL team in Russia for two more seasons.

Day 1 was filled with rumours, but not much action – other than the Podkolzin addition. That changed on the far less glamorous second day of the draft on Saturday.

For the first time since taking over as general manager in 2014, Canucks GM Jim Benning traded his first-round pick, to get JT Miller.

Benning traded a lottery-protected 2020 first-round pick, a 2019 third rounder, and minor league goalie Marek Mazanec to the Tampa Bay Lightning for Miller. Should the Canucks miss the playoffs next season, the first-rounder becomes a 2021 pick.

Benning sees Miller, who has scored 40+ points in each of the last four seasons, as a top-six forward for his team. He’ll likely play with either Elias Pettersson or Bo Horvat, says Benning.

“He’s a guy we really feel is going to help the group out and help with the development of our younger players,” Benning told reporters.

The trade is controversial, to say the least. The Canucks are still a rebuilding team, so trading a first-rounder for a player like Miller is unconventional. It’s a move that’s signals that the Canucks will be pushing for the playoffs, if not this season, then certainly by 2021.

Getting Perron from San Jose

The Canucks traded down in the draft, swapping their sixth-round pick for a seventh-rounder, in order to get Francis Perron from the San Jose Sharks. Vancouver also gave up minor league forward Tom Pyatt.

The third Canucks trade of the day was an exchange of draft picks, dealing their fourth round pick (No. 102) to the Buffalo Sabres for a fourth (No. 122) and sixth (No. 175) round selections.

The deal meant that the Canucks would make nine draft picks – the same number that they held heading into the weekend.

The #Canucks Director of Amateur Scouting, Judd Brackett, breaks down Vancouver's picks and mindset at the #NHLDraft. pic.twitter.com/i1eQ9V1nVD

For the first time since 1976, the Canucks didn’t select a single defenceman in the draft, instead opting for six wingers, two centres, and one goaltender.

Miss the first round of the #NHLDraft? Meet Vasily Podkolzin, the newest member of the #Canucks. 🔥🇷🇺🚨 pic.twitter.com/IG0GoFfkSs

The Canucks said that while Podkolzin, a Russian two-way power forward, filled a need, he was also the best player available with the 10th pick.

“We had him in our first cut of players in this draft,” Director of Amateur Scouting Judd Brackett told reporters. “We talked about it last year with Quinn (Hughes) where the player fit the need but he was also the best available. So where that intersects you can’t ignore it.

“Too much player there in terms of compete, hockey sense, size, power and things we don’t have right now in our prospect pool.”

Nils Hoglander is small, but supremely confident – unafraid of anything on the ice. He was a player that the Canucks were worried could be snapped up in the first round – so they were happy to see him still available with the 40th pick.

“Hoglander is arguably one of the guys with the best hands in the draft,” said Brackett. “He has creativity, determination, he’s really quick. Maybe he gives up a little bit in size but he plays the right way… he’s good in the right areas, he’s quick where he needs to be, good balance, strength, creative mind and high offensive potential.”

Benning was thrilled to get him.

“I love this guy,” said Benning. “He’s hard on the puck, he’s got good skill, he’s fast. I think we got a steal there in the second round.”

"Incredible feeling, a dream come true. It's an honour to be drafted by the #Canucks. A Canadian boy in a Canadian market, I'm very excited." – @EthanKeppen92 pic.twitter.com/wBlqjFFmyD

“I’m a power forward type player that plays a 200-foot game that can play in any situation,” said Ethan Keppen, who the Canucks took in the fourth round.

Focht’s season included one four-goal game & two hat tricks. One of those hat tricks was a five-point game (3G-2A) on March 6, 2019. #NHLDraft pic.twitter.com/IflW79RQ2L

Carson Focht is a teammate of Canucks prospect Jett Woo with the Calgary Hitmen and has been invited to the World Junior Summer Development Camp.

"Your waiting for that pick, it's amazing relief and an amazing feeling!" -Goaltender Arturs Silovs talks about being selected 156th overall by the #Canucks in the 2019 #NHLDRAFT pic.twitter.com/ChMj0qBlOe

With their third pick in the sixth round, the Canucks chose playmaking winger Jack Malone, who will play NCAA hockey at Cornell University next season.

A childhood friend of Canucks 2017 draft pick Jack Rathbone, Aidan McDonough is following the same path as Adam Gaudette. He’ll play at Northeastern University in the NCAA next season, following time with Cedar Rapids in the USHL – just like Gaudette.

Arvid Costmar primarily played junior hockey in Sweden last season, but was promoted to the SHL (the top pro league in Sweden) for four games.