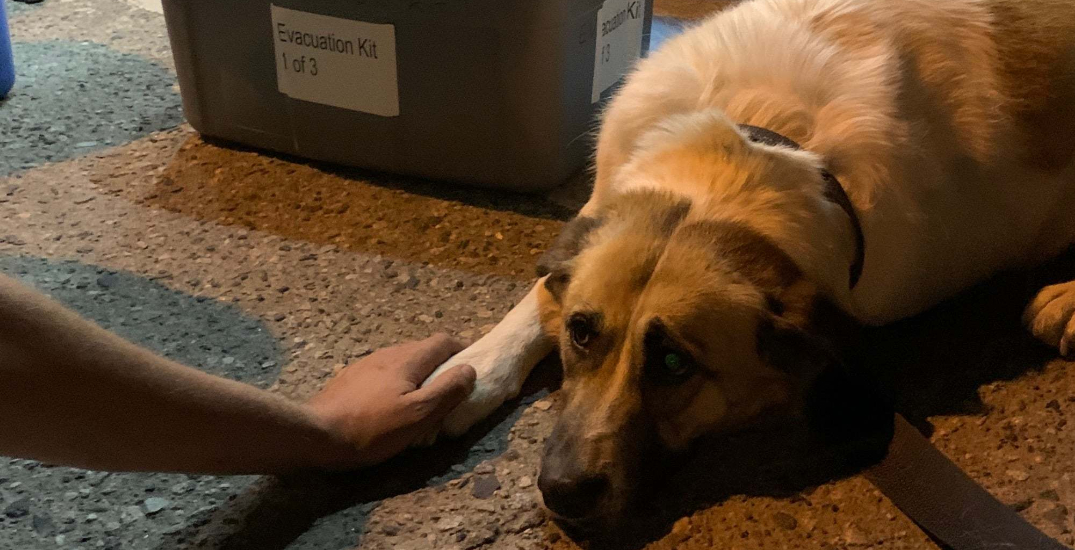 A search and rescue team briefly ended up with a new mascot over the weekend after saving a dog that was abandoned during wildfire evacuations.

Central Okanagan Search and Rescue (COSAR) recounted the incident on Facebook, writing that members were helping to evacuate homes on Westside Road in Kelowna on August 6.

An evacuation order was issued for the area just after 8:30 pm on Friday night due to the White Rock Lack wildfire.

A crew went to a home at La Casa resort to inform a resident of the evacuation but, due to language barriers, a “long conversation took place” and a translator was need via phone.

“As the team continued through the neighbourhood they noticed the man leaving in his vehicle, only to stop 100 yards up the road and throw an older dog from his vehicle before continuing out of the resort and south down Westside Road,” the post reads.

Team members were able to wrangle the dog and brought her back to their command base. An older, mixed-breed female, the pup was given food, water, and the nickname “Smokey.”

After spending Friday night at a COSAR member’s house, Smokey was taken to Dr. Moshe Oz at Rose Valley Veterinary Hospital. She has no collar or tattoo, the COSAR team said.

“It’s my understanding that after Dr. Oz checks Smokey over, a suitable home will be found,” COSAR search manager Duane Tresnich.

“I know these are incredibly stressful times, but what happed is unacceptable.”