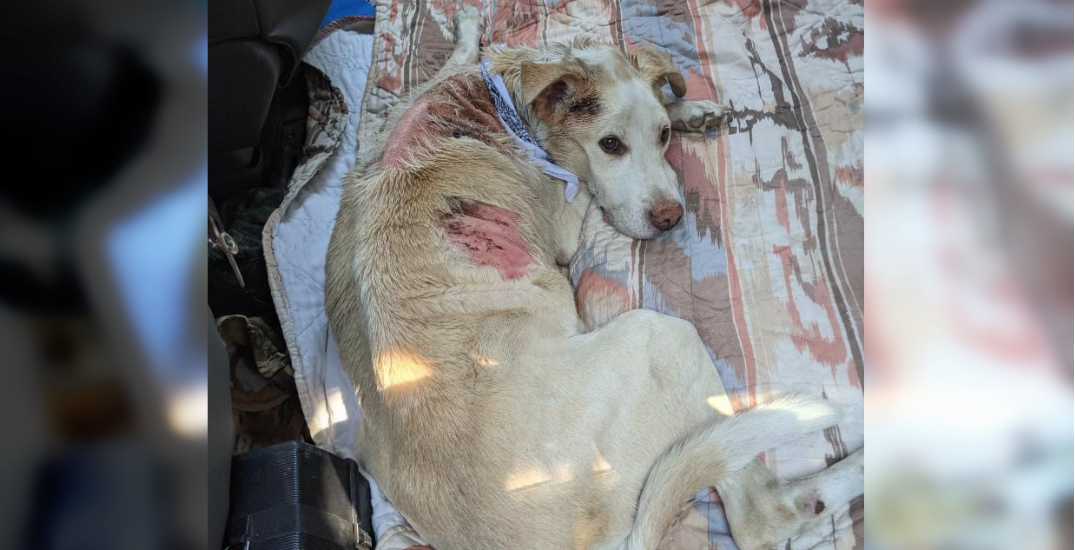 A seven-year-old dog is recovering after being burned while trying to escape from wildfires in the Okanagan Valley.

On July 22, a man visited Charlie’s Pet Food Bank, a Downtown Eastside outreach program run by the BC SPCA, hoping to get help for his dog.

The man had been working as a seasonal fruit picker near Osoyoos when the fires broke out, the BC SPCA said. His home was destroyed, and his dog, Tonnerre, fled from the flames.

“He frantically searched for Tonnerre after he bolted from the fires,” said BC SPCA special constable Alex Jay.

“He was heartbroken, fearing his pet had died, but Tonnerre reappeared four days later, covered in burns.”

Not knowing where to turn to for help, Tonnerre’s owner drove to his brother’s home in East Vancouver. His brother’s girlfriend suggested he take the pup to Charlie’s.

After seeing the dog’s injuries, the BC SPCA transported Tonnerre to an emergency hospital for treatment of his burns and other wounds sustained during his escape.

The BC SPCA said it covered the cost of Tonnerre’s care, and that his injuries were less severe than originally believed. He has been reunited with his owner and is recovering.

Jay said that the wildfires have created some “heartbreaking situations” for pet owners, but that, for the most part, missing animals have been located safe and alive.

“The man was so thankful for everything that had been done to help Tonnerre,” Jay said.

“It’s a very good feeling to be able to make those reunions possible.”