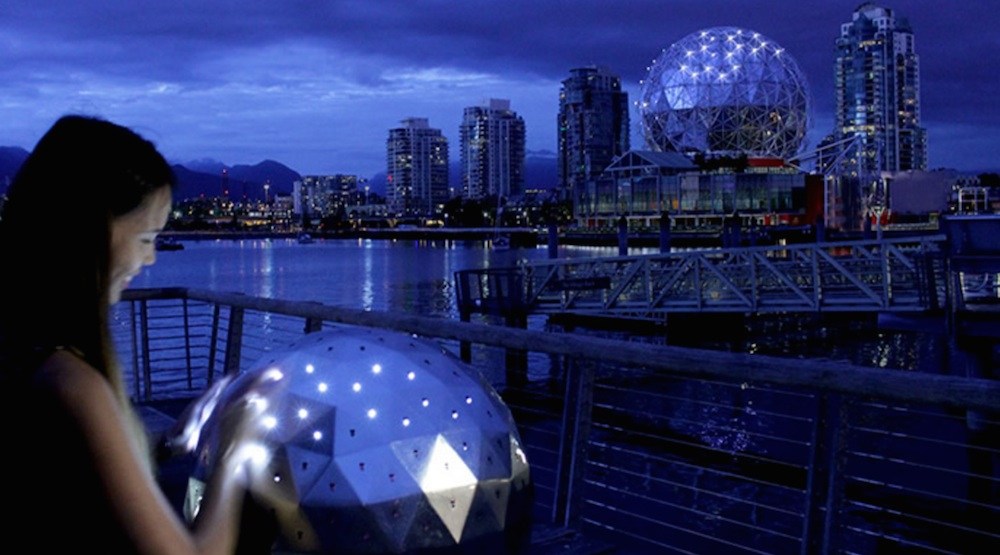 A free interactive public art installation on the False Creek seawall will allow the general public to take control of the nighttime lights on Science World.

Every weekend throughout the month of August, an orb-like scale model of the dome will be placed on the seawall at Olympic Village next to Tap and Barrel.

Named ‘OH!’, the orb is covered with LED lights and 24o sensors that sense the movement of people’s hands, which in turn changes the pattern of lights on the landmark structure in real time. 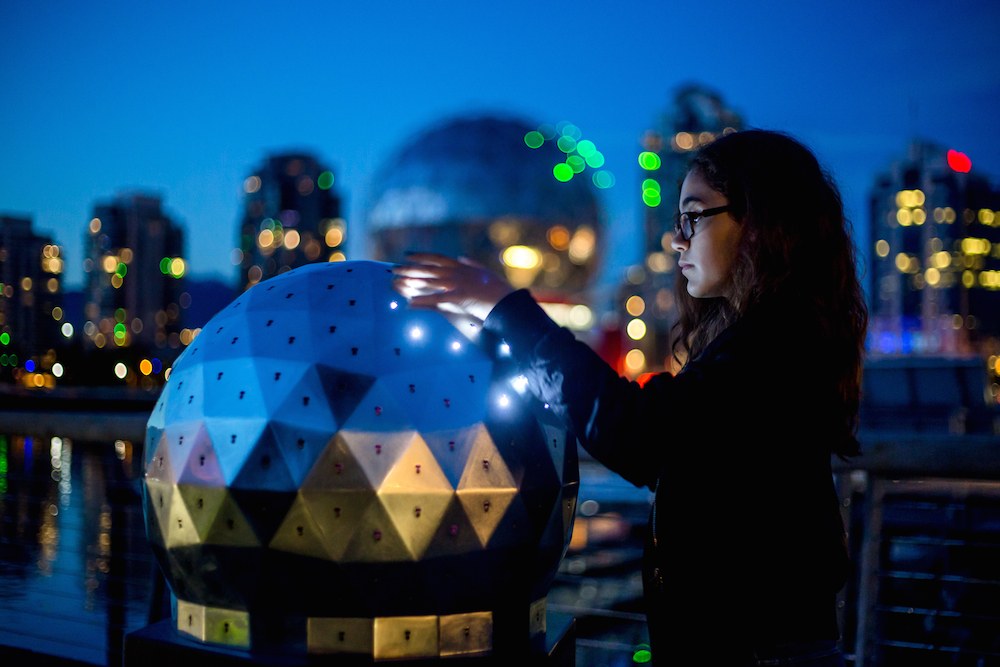 Through the dome’s new software programming, six different animations are possible, and each have variations in colours and patterns, including sparkles, bands, and waves.

“When you touch the small interactive model you are really touching the whole city,” said Alex Beim, Founder of Tangible Interaction, the local company that created the installation, in a statement.

“What I really want is for people to be present in the moment, and feel connected to the city and people around the installation. The goal was to create a space for social interaction and we feel that OH! does just this.”

The installation will be available for the public to use every Friday and Saturday through the end of August, with the first weekend coinciding with Vancouver Pride.

Interactive lights on the dome from August 4 to 6 will be rainbow coloured as part of the city-wide celebrations for the LGBTQ community. 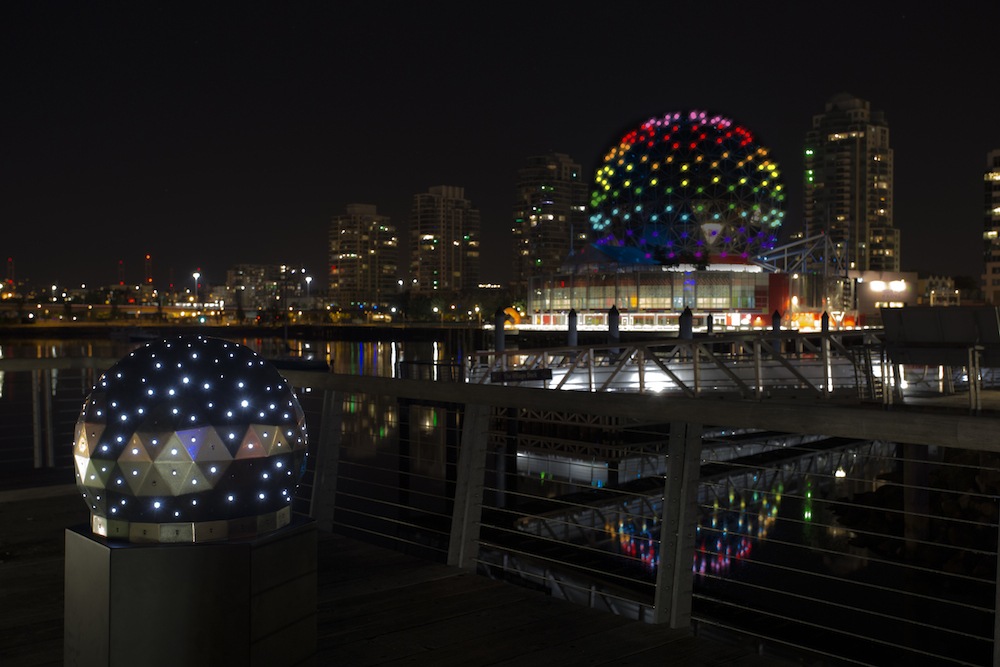 Funds required to light up Science World with the new sensory experience were provided by the provincial government’s Creative BC agency. Tangible Interaction collaborated closely with Science World to bring the installation to life.

“It’s been a pleasure to once again work with Tangible Interaction on such a sensory experience,” said Tom Cummins, Director of Exhibits for Science World. “Working together at the intersection of art and science to create experiences that evoke a sense of wonder and engage the public at this scale is super exciting.”

Tangible Interaction has created a number of other installations for major multinational commercial brands like Adidas and Chanel as well as the Vancouver Aquarium and 2010 Winter Olympics. 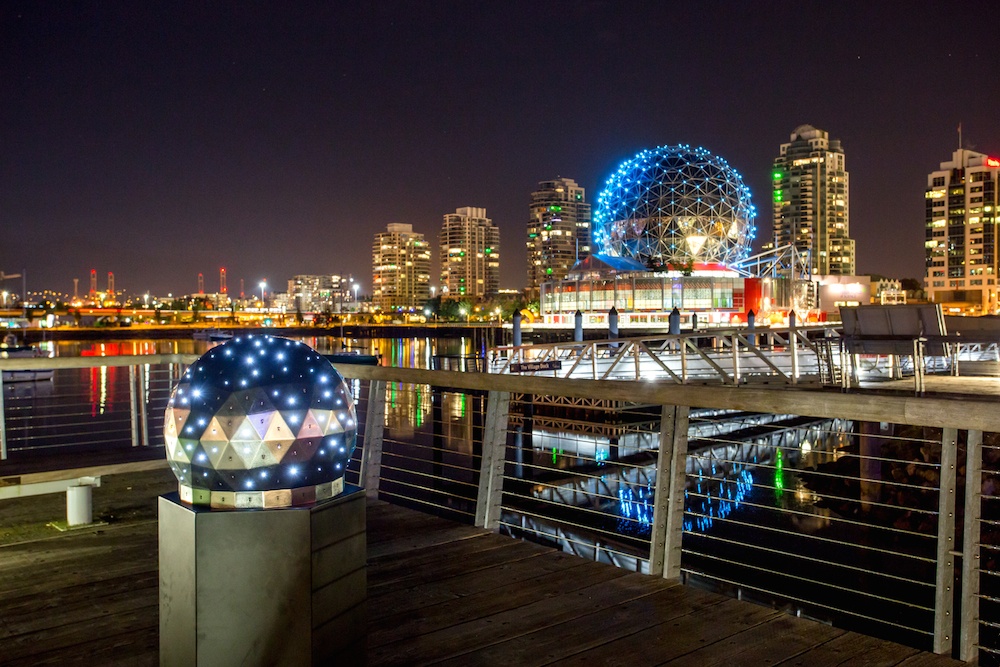 The company was also recently commissioned to design and install the FIELD interactive light and sound public art piece as part of the makeover project for the laneway behind the Orpheum Theatre.

Other nighttime activities in the False Creek area this August include the Nomadic Tempest free nighttime circus and light show, which uses a tall ship as its stage, just east of the Olympic Village and the Uninterrupted projection show on the underside of the Cambie Street Bridge.

When: 9 pm to 11 pm during the following dates:

Where: False Creek seawall at the Olympic Village, next to Tap and Barrel (1 Athletes Way, Vancouver)