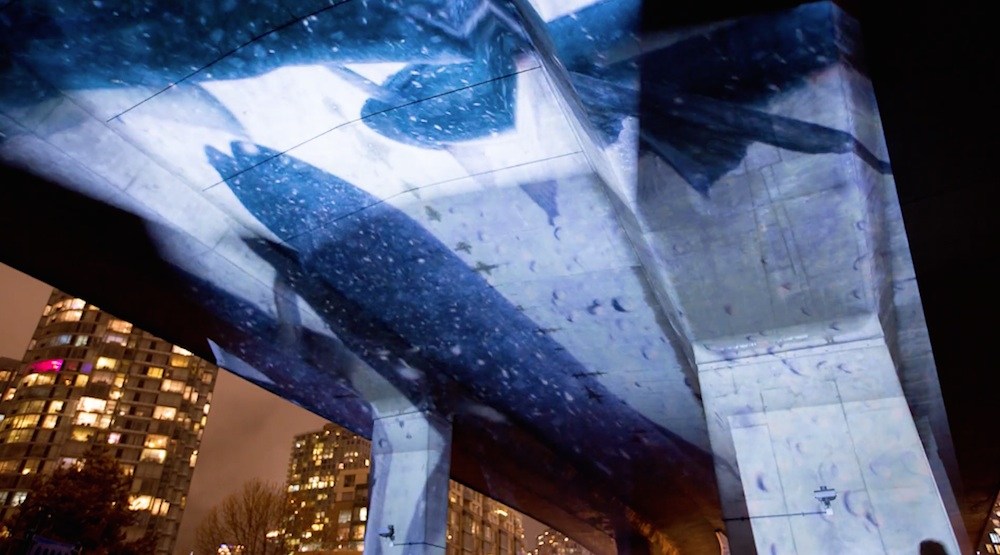 The display will be under the Cambie Street Bridge. (Uninterrupted)

High-tech artwork along the entire undersurface of the Cambie Street Bridge meant to represent the “life blood” of the West Coast will be officially unveiled to the public later this month.

Entitled Uninterrupted, it is meant to tell the the story of Wild Pacific Salmon’s life journey.

The free 25-minute show goes live on June 28 and can be viewed nightly from Tuesday through Saturday after dusk, at Coopers Park, on the north side of the bridge until September 24.

Last Friday, Terry Beech, MP for Burnaby North-Seymour, recognized the project in the House of Commons.

“Audiences will witness the extraordinary migration of these iconic fish, projected across the entirety of the Cambie Street Bridge,” Beech told the House.

With the bridge more than a kilometre in length, the projection will be “one of the largest projections of original cinematography ever attempted,” said Beech.

The MP then offered his congratulations to Director Nettie Wild, Producers Betsy Carson and Rae Hull, Editor Michael Brockington, and the rest of their team.

According to its creators and producers, Uninterrupted takes viewers ”on a beautiful and immersive journey that has been repeated in BC waters for millennia.”

Spectators will travel upstream with silver Sockeye turning to crimson as they return to their freshwater birthplace to spawn – a natural cycle that nourishes land, water, animals and people, but faces growing threats from human intervention.

When: 25 minute shows nightly from Tuesdays to Saturdays this summer:

Where: Viewed from North Side of Cambie Street Bridge at Coopers Park