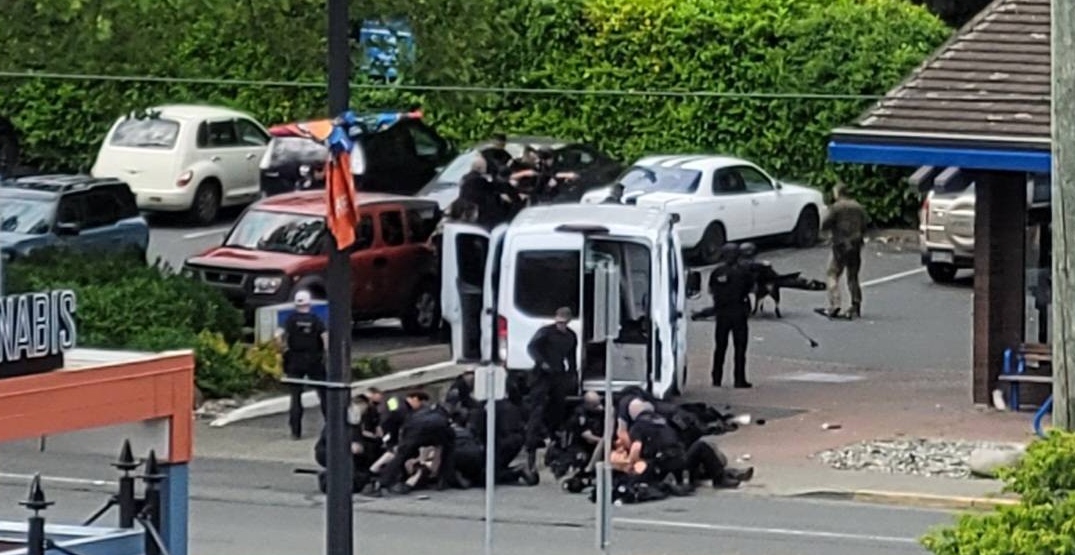 Several people were injured after an attempted bank robbery in Saanich, BC, Tuesday that involved a police shootout.

Police have issued a shelter-in-place advisory, which is still in place as of 3:30 pm, and are evacuating homes and businesses near the bank because of the “presence of a potential explosive device.”

Two suspects are in custody, and members of the public are asked to avoid the area near Shelbourne and Pear streets.

Officers are evacuating homes & businesses within a close proximity to the scene of the incident – a bank at the intersection of Shelbourne St & Pear St (3600-blk Shelbourne St) – due to the presence of a potential explosive device. Please continue to avoid the area. #yyj

“I am sickened and saddened by this incident. But at this time I cannot say more,” Saanich Mayor Fred Haynes told Daily Hive.

The violence broke out early in the afternoon of June 28 near the Bank of Montreal Branch at 3616 Shelbourne Street.

There’s a video circulating that apparently shows the police shootout. It’s filmed by a witness sitting in a parked car and shows several police officers running amid sounds of gunfire. There’s a K-9 unit present.

Daily Hive has not included the video because of its graphic nature.

Police have urged the public not to share the location of officers on social media as they conduct their search.

Multiple officers have responded to a police incident in the 3600 blk of Shelbourne St. Please avoid the area.

Police initially said officers were being sent to an “incident” and then said there had been a report of armed suspects at a bank and an exchange of gunfire with multiple people injured.

Officers responded to a report of armed suspects at a bank in the 3600-blk of Shelbourne St. There was an exchange of gunfire. Multiple people have been injured. Please continue to avoid the area.

Although two suspects are already in custody, officers are searching for a possible third suspect.

The shelter-in-place advisory remains in effect as we continue our search for a possible third suspect. We will continue to provide updates here. #yyj #Saanich