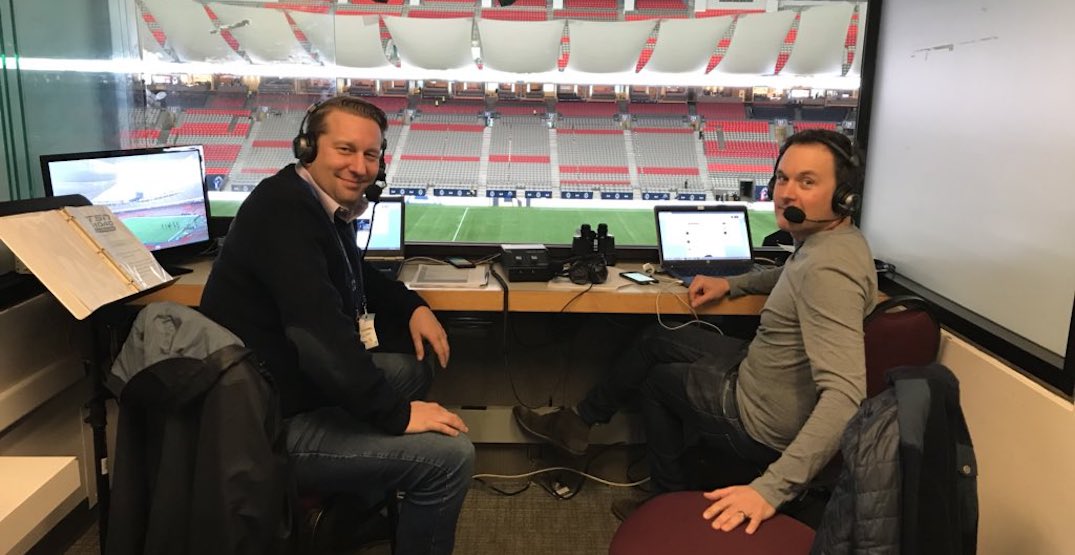 Four weeks after Bell Media pulled the plug on TSN 1040, there are inklings that something is on the horizon that will provide local sports radio fans with a choice, albeit an unconventional one.

Don Taylor has been teasing us on Twitter about something in the works with his old 1040 cohorts, appearing to hint at a return to television. Same goes for Matt Sekeres and Blake Price, who have both tweeted out that things are in the works and Price’s Twitter bio reading, “on the mic again shortly.”

Former 1040 alum, Rob Rees (advertising sales rep) and Rob Gray (program director) currently run North Beach Agency, a marketing and advertising agency located in Vancouver. The agency had a number of clients advertising on TSN 1040 and I’ve been told they could create an avenue for some of the hosts to return to a podcast or streaming format that would ultimately give those clients a home again.

“We have a couple of podcast on the go already: ‘Ray and Dregs’ and ‘On the Bus with Cammi and AJ,’ and are always exploring different opportunities to partner with other dynamic personalities and storytellers in that space,” says Gray.

The most talked about candidates for the return there are Sekeres and Price, with Mike Halford and Jason Brough in discussion as well – or so I’m told.

Rob Fai wasted little time taking “The Nation” online to YouTube after every Canucks game, while bringing on other 1040 alums like Jeff Paterson, Dave Tomlinson, and Jon Abbott. Fai also has a new venture called “Sportsbar Radio” dropping March 15, which will include a wide variety of sports topics, including esports, wrestling, and sports betting.

Imagine getting to create a sports show from scratch, and having the company backing you saying "do whatever makes you happy, we're in."

March 15, for the first time in my career, I get to bring you a radio-themed show with no limits. More details to come, but this will be fun. pic.twitter.com/m2H6rECVH0

A so-called angel investor, who wished to remain nameless, has been looking to create an online streaming platform. In essence, this would take the existing 1040 format, shows, and hosts, and placing it online to stream live with downloadable podcasts. While this plan seems dead, as not all the 1040 crew were on board, the investor told me, “I’m not ready to give up on this plan.”

He feels the plan is very doable and hopes he can bring 1040 back, as he was a “big fan” of the programming.

Giving radio fans hope, 1040 — or at least it’s hosts – could return to the actual radio airwaves on a different radio station, one not called Sportsnet 650.

Rumours are swirling that an FM-based station in the market — that is not owned by a big media conglomerate company — could potentially flip formats to an all-sports station. It also would hope to bring in the 1040 crew – including former host David Pratt – for a reunion of sorts. This one is likely a long shot given it would require CTRC approval on a number of items and depending on how long it all takes, if some of the hosts are still available. The ownership on the station didn’t provide a comment as it’s still considered early days, and they are respecting their current employees.

Regardless of what happens, these options show that there is an interest to bring the 1040 players back to the forefront. When and where they end up is ultimately to be seen or heard.

The hosts and staff of the various TSN 1040 shows weren’t the only casualties of the Bell Media cuts. The BC Lions and Vancouver Whitecaps were left wondering where their games would be broadcast in 2021.

There’s a rumour being floated from within the Lions organization that the team is in talks with CKNW to return the radio rights back to the 980 airwaves.

Speaking to club season ticket holders, BC Lions president Rick LeLacheur: “We’ve had interest from a number of parties. Of course, there’s various different ways now to deliver audio, but most important to us, and particular, our season seat holders, is pre-game radio and post-game radio.

No word on whether a broadcast return would also include Bob Marjanovich (play-by-play), Giulio Caravatta (colour analyst, a role he has held since 2000 at CKNW and TSN1040), or Karen Surman (sideline reporter), although keeping Caravatta around would be a logical move given his tenure and relationship with the Lions fanbase.

The Whitecaps have broadcasted their games on either 1040 or 1410, even prior to joining MLS in 2011, and are now without a broadcast partner.

“We are exploring a number of options and we will be able to provide an update in the coming weeks,” said Tom Plasteras, Whitecaps FC’s chief communications officer.

Many have asked if the Whitecaps could stay on 1040 or 1410, find a home elsewhere, or scrap the radio broadcast altogether. According to Plasteras, we should have an answer soon.

Some will question whether Rogers-owned Sportsnet 650 would pick up the Whitecaps rights considering the team has Bell as their jersey sponsor. I’m told it wouldn’t hinder any connection between the two now entities.

Sportsnet 650 program director Craig MacEwen has called play-by-play for Whitecaps broadcasts before. Could he see a return to the booth if it goes that way? Perhaps Dan Riccio, who has experience calling games in the Canadian Premier League and for Toronto FC matches, could be tabbed for the role.

If the Whitecaps radio rights land elsewhere, Corey Basso and Colin Miller, who have called games on 1040 the last number of years, could be brought back as the broadcast crew. Miller would be a strong candidate to land the role of colour analyst, regardless of destination.