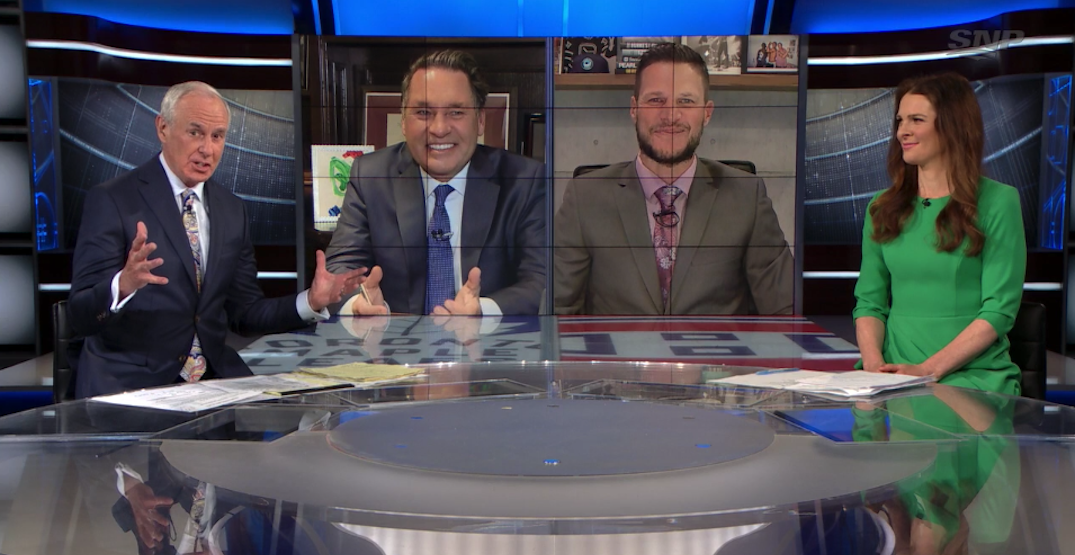 Ron MacLean has apologized for a poor attempt at a joke during Tuesday’s Hockey Night in Canada broadcast.

The longtime host is well known for his clever quips, but at best, this one fell flat.

During the second intermission of a game between the Toronto Maple Leafs and Montreal Canadiens, Kevin Bieksa joked that he was the “most positive guy” on the panel. MacLean quipped back: “You have a photo of a guy with his tarp off, you’re definitely positive for something.”

The “tarp off” comment was in reference to a photo on Bieksa’s bookshelf, which showed someone posing with their shirt off. What exactly he meant by “you’re definitely positive for something” was less clear, and the source of anger for many.

MacLean’s name was trending on Twitter Tuesday night and for much of Wednesday, with many calling the joke homophobic.

The Hockey Night in Canada host has since apologized, and said he has reached out to “allies in the LGBTQ2S+ community” in a statement posted to Twitter.

MacLean also said that his joke was misunderstood, contending that it was in reference to “rum party.”

“Ron MacLean has a strong history of being an outspoken ally and continues to advocate for all equity-seeking communities,” Sportsnet PR said in a separate statement. “Sportsnet supports Ron in his acknowledgement and apology for the comment made during last night’s broadcast.”

Along with his public apology, You Can Play, an organization that works “to ensure the safety and inclusion for all who participate in sports, including LGBTQ+ athletes, coaches and fans” said that MacLean had a heartfelt discussion about the context of Tuesday’s broadcast.

“We appreciate Ron’s work as a longtime Ally and look forward to seeing him involved in the future,” said the organization.