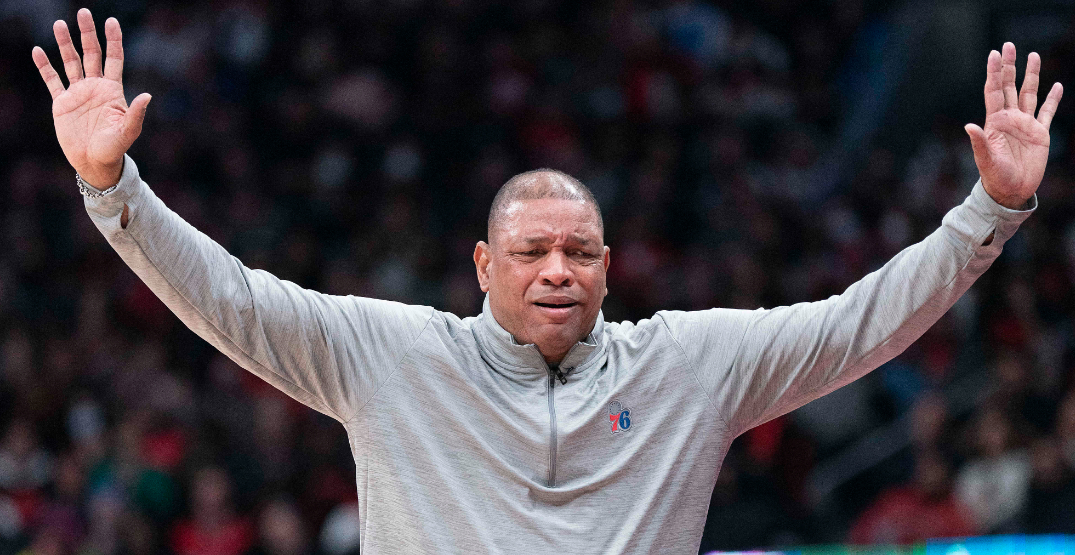 Rivers, whose 76ers hold a 3-2 series lead against the Toronto Raptors in the NBA playoffs, got a little defensive when talking about past postseason failures.

The skipper, whose team jumped out to a 3-0 series lead before losing the past two games to the Raptors to force the series to Game 6, is the only coach in NBA history to lose multiple series’ when having a 3-1 lead.

“It’s easy to use me as an example, but I wish I would tell the whole story with me,” Rivers told media Wednesday. “My Orlando team was the eight-seed. No one gives me credit for getting up against the Pistons, who won the title. That was an eight-seed. I want you to go back to look at that roster. I dare you to go back and look at that roster, and you would say, ‘what a hell of a coaching job.’ Really.”

Doc Rivers got a little defensive when discussing his past teams' collapses 👀 pic.twitter.com/88PqjDDUZa

The first bouncing, as Rivers referred to, was a collapse with the Orlando Magic in 2003. The Detroit Pistons lost Game 5 in the series by a 98-67 score and lost Games 5 and 7 by 15 points each.

It happened again in 2015 with Rivers at the helm of the Los Angeles Clippers. A 3-1 series lead evaporated against the Houston Rockets, with the Rockets winning with margins of 21, 12, and 13 in the series’ final three games.

“The Clippers team that we lost 3-1… Chris Paul didn’t play in the first two games and was playing on one leg. And we didn’t have home court,” Rivers explained.

In 2020, Rivers’ Clippers let a 3-1 series lead slip against the Denver Nuggets inside the NBA’s bubble in Orlando. Rivers was fired after the second-round series.

“The last one, to me, is the last one we blew,” Rivers admitted. “We blew that. And that was in the bubble, and anything can happen in the bubble. There’s no home court. Game 7 would’ve been in LA. But it just happened.”

In all, 13 teams have rallied to overcome a 3-1 playoff series deficit.

Rivers owns three of those defeats.

He is, however, still one of the most successful coaches in NBA history.

But he’s also on the verge of being the first boss in NBA history to lose a series when up 3-0.

“I would say with me, some of it is I’ve got to do better, always,” Rivers said. “I always take my own responsibility. And then some of it is circumstances happen.