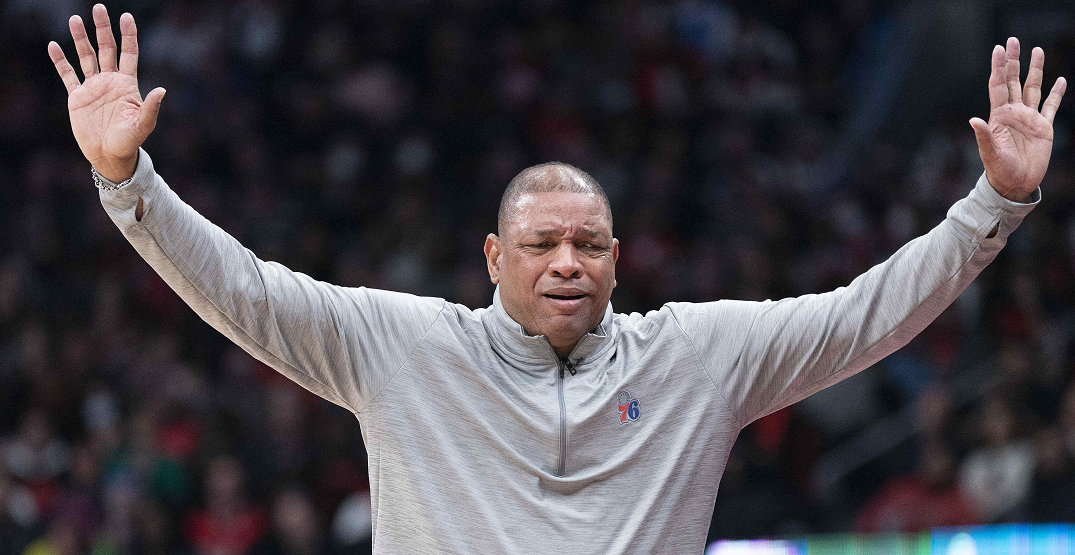 Philadelphia 76ers head coach Doc Rivers has earned his recognition as one of the NBA’s most storied teachers.

He’s won an NBA championship in 2008 with the Boston Celtics, won a Coach of the Year Award, and been on the winning side of 1043 regular season games, good enough for ninth most all-time.

He’s been a staple of the league for over two decades as a coach following a 13-year playing career and was honoured as one of the league’s top-15 coaches of all-time earlier this season.

But is he known as a playoff closer? Maybe not quite.

In NBA history, 13 teams have overcome a 3-1 playoff series deficit.

Three of those teams that blew the lead were coached by Doc Rivers, making him the only coach in history to pull off three collapses of that proportion.

Of course, his current lead of 3-1 over the Toronto Raptors started out as a 3-0 lead before Toronto came back with a win Saturday to extend the series at least one more game.

No team in NBA history has come back from down 3-0, with an 0-143 record. Just three of those teams have forced a game seven, which the Raptors are still two wins away from.

The history and odds of Toronto pulling off such a comeback are massive. But they’re a little bit better than they were two days ago.

“Somebody’s got to do it,” Raptors coach Nick Nurse told reporters this week about the possibility of a four-game comeback.

Here’s a look back at each of those blown 3-1 leads from Rivers:

Rivers was in year four as an NBA coach when he blew his first 3-1 lead.

Rivers’ Magic had been bounced out of the first round of the playoffs in both 2001 and 2002 but looked set to win their first playoff series since 1996 the following year.

But an ugly 98-67 loss in Game 5 by the Magic set the wheels in motion for the collapse, with the Magic losing Game 6 and 7 by 15 points each.

Tracy McGrady led the Magic in scoring in each playoff game that year, including a pair of 40-point plus performances in Game 1 and 2.

Rivers seemed to shake off the 2003 collapse and was able to find considerable postseason success. He’d gone 62-50 in the playoffs and made it to two NBA Finals with the Boston Celtics, winning one. His 2014-15 Clippers won 56 regular season games, and knocked off the defending champion San Antonio Spurs in seven games in the first round of the playoffs.

But then everything fell apart. Facing off against a Houston Rockets team led by a current 76er in James Harden, Doc’s Clippers couldn’t close things out.

Like that ’03 Magic team, they won Game 1 on the road and 3 and 4 at home. But it wasn’t all that close once the Rockets got going, with winning margins of 21, 12, and 13 in the series’ final three games. The Clippers entered the fourth quarter of Game 6 up 92-79, but a 40-15 fourth quarter run from Houston provided the fuel for one of the league’s most epic comebacks.

Back in the early days of the COVID-19 pandemic, the NBA’s bubble in Orlando was the host for the entire league from August to the NBA Finals in November.

Rivers’ Clippers transformed immensely during his time in LA, going from the “Lob City” days of Blake Griffin and Chris Paul to the new blood of Kawhi Leonard and Paul George leading the squad. The Clippers once again looked like they could be an NBA contender and took — you guessed it — games 1, 3, and 4 in their second-round series against Denver.

But Nikola Jokic and Jamal Murray came to play in the final three games of the series, including a 40-point performance from Murray in Game 7. That marked the end for Doc Rivers in LA, as he was fired less than two weeks after the series ended.