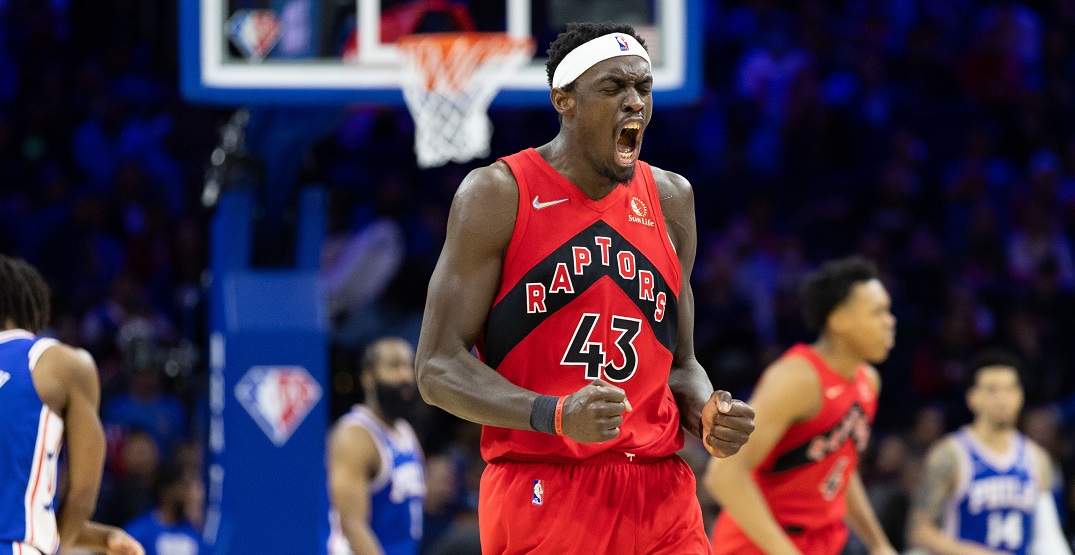 Bill Streicher-USA TODAY Sports"He wanted to stay in, but I thought he got a little tired... I thought Joel gave us what he had tonight."

If the Toronto Raptors are going to pull a historic comeback against the Philadelphia 76ers, they’ll need all the juice they can get.

Down three games to zilch and looking like their season was all but over, the Raptors are two wins away from pulling off the first 0-3 comeback in NBA history.

And whatever you want to call it: juice, cardio, stamina, energy, the Raptors have it in spades.

No team in the NBA used their starters more than Raptors coach Nick Nurse did this season, with his opening units averaging 34.1 minutes a night. Sure, Philadelphia and Doc Rivers ranked second, but there’s more to that later.

Four Toronto players: Scottie Barnes, Pascal Siakam, Fred VanVleet, and Gary Trent Jr. all ranked in the top-25 in total minutes league-wide, despite missing a combined 41 games between the four of them.

The fifth member of the Raptors’ ideal starting unit — OG Anunoby — averaged 36 minutes in the 48 games he played this season, all starts.

When the Raptors’ top players played this regular season, breaks were few and far between.

Come playoff time, those breaks have been a little bit more unexpected and unfortunate.

Trent Jr. has missed time with an illness, Barnes missed Games 2 and 3 with an ankle injury, and VanVleet suffered a hip injury in Game 4. But Siakam has led all players league-wide come playoff time with 216 total minutes, including a 48:29 run in an overtime loss in Game 3.

In Game 5, sans VanVleet, Siakam played 44 minutes, Barnes 41, Anunoby, and Trent Jr. 39 each. If you simply glanced at the numbers, you wouldn’t be able to tell if the game was from January or April.

“Yeah, it was conditioning. We’re conditioning them through the year for this,” Nurse said with a smirk following the Raptors’ Game 5 win when asked about if their minutes throughout the year gave them any sort of message. “It probably hasn’t hurt.”

For a coach who all but coined the term “load management” while dealing with Kawhi Leonard’s injuries in the 2018-19 season, Nurse has adopted a new strategy of playing players as much as they’re capable of doing so.

Maybe it’s out of necessity. Maybe it’s out of madness. But at least in the last two games of the series where the Raptors needed that extra burst, it’s helped them claw back from a seemingly insurmountable deficit to at least put the comeback in the realm of possibility.

“You get some time from the end of the year [to rest]. We had about a week till our first playoff game, now we’re gonna get a few days [to rest],” Nurse added. “Every game is critical. No matter what the score in the series is and you’re gonna run your best guys about as long as you can.”

It appears the heavy usage strategy has been echoed throughout the organization, right up to the very top.

“Yes, they have been playing a lot of minutes,” Raptors president Masai Ujiri told reporters in February. “Some of it is to put them in those situations because, what’s a playoff situation going to be eventually when these guys play? It’s going to be like that, it’s them playing in heavy situations. We have to learn these things.”

Masai Ujiri during the season about heavy minutes:

"Some of it is to put them in those situations because, what's a playoff situation going to be eventually when these guys play? It's going to be like that, it's them playing in heavy situations. We have to learn these things." pic.twitter.com/ID3tMdR3m6

Taking it a step further, there’s a contrast in the usage between the teams’ two biggest stars in the series: Siakam and 76ers centre Joel Embiid.

For the 76ers, they’ve been dealing with bumps and bruise of their own, most notably  Embiid’s thumb injury that has limited his production to 41 points combined in the last two Raptors wins.

When he was off the floor, his teammates were a combined -11. As it often goes with the 76ers, the game is close with Embiid out there, but the Raptors are able to take advantage of bench units.

“He wanted to stay in, but I thought he got a little tired,” 76ers coach Doc Rivers said about Embiid sitting to start the fourth quarter. “I thought Joel gave us what he had tonight.”

But outside of Siakam and Embiid, there are runners on both sides of the court, and neither team has been at full health for more than two games in a row. VanVleet has hit the 40-minute mark 21 times, James Harden has done it 18 times, Scottie Barnes 15, and Tyrese Maxey 14.

The Raptors’ high-minutes strategy throughout the year won’t guarantee them the chances of making a historic comeback. But it’s at least keeping them in the series where other teams may have folded.

Tipoff is set for 7 pm ET on Thursday. May the least worn out team win.