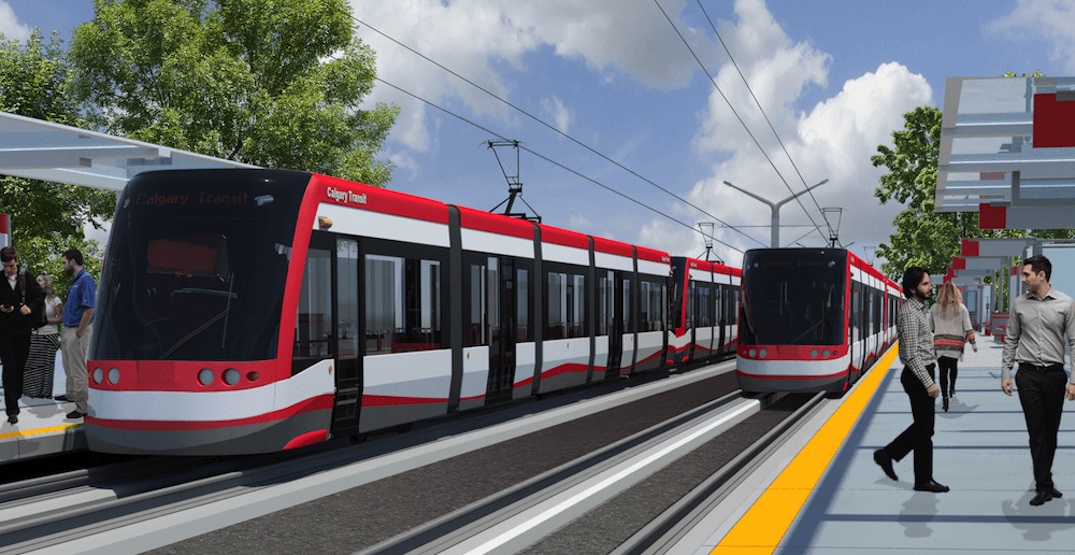 Artistic rendering of a station for the Green Line LRT in Calgary. (City of Calgary)

Densification of the Railway Avenue Corridor in Richmond could support a rail rapid transit service between Richmond City Centre and Steveston.

Currently, the corridor — extending 400 metres on either side of both streets — has about 24,000 residents and 4,000 jobs. Townhouse development is generally the densest form of development permitted.

More than a century ago, the railway was built by the Canadian Pacific Railway to link Vancouver with Steveston’s fishing businesses and was later used as an Interurban streetcar route. Over the past decade, a greenway for pedestrians and cyclists was built on the deactivated railway.

The entire corridor spanning from No. 3 Road to Moncton Street has a length of about 6.6 km. For a link to the Canada Line’s Richmond-Brighouse Station, a theoretical rail rapid transit would have to continue 600 metres north from the intersection of No. 3 Road and Granville Avenue. 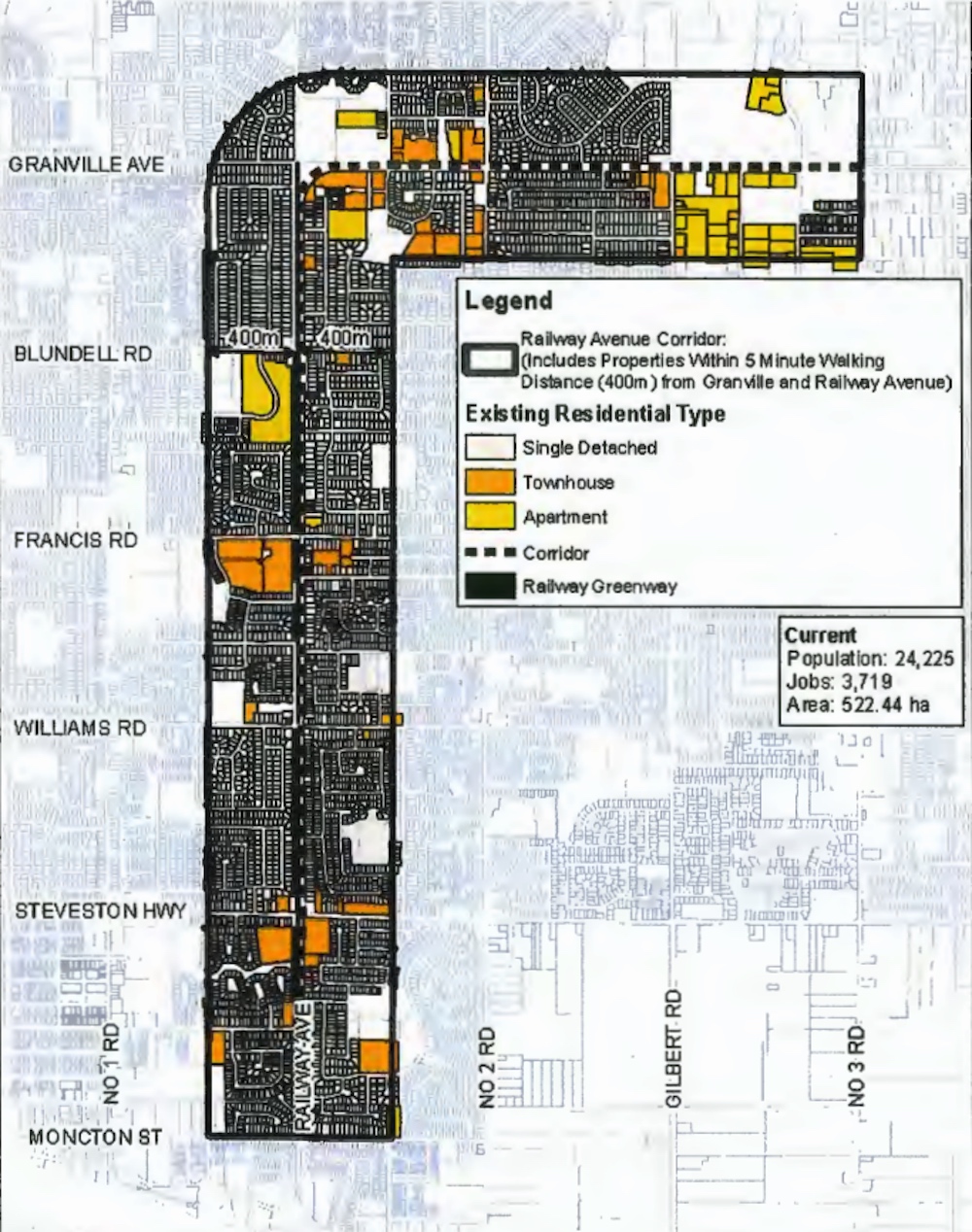 According to the city staff report, in order to achieve densities that support improved bus services, there would need to be mid- and low-rise development along the corridor, including four-storey, mixed-use apartment buildings at key intersections within 120 metres of key intersections, and townhouse development along the corridor. This would double the existing population density of the area.

Significantly higher densities would be needed to support rail rapid transit, similar to the recent development along the No. 3 Road Corridor near Canada Line stations.

Under this rail rapid transit density scenario of increasing the corridor’s population density by about 215%, there would be both high- and low-rise development, with 12 to 15-storey, mixed-use towers at key intersections within 120 metres of Granville Avenue and Railway Avenue, and extending townhouse development along the corridor.

Building heights taller than the city centre could technically be permitted along much of the corridor; except for a portion of Granville Avenue between Railway Avenue and No. 3 Road. The corridor is largely unaffected by the 155-ft (47 metre) height restrictions due to Vancouver International Airport’s flight path. 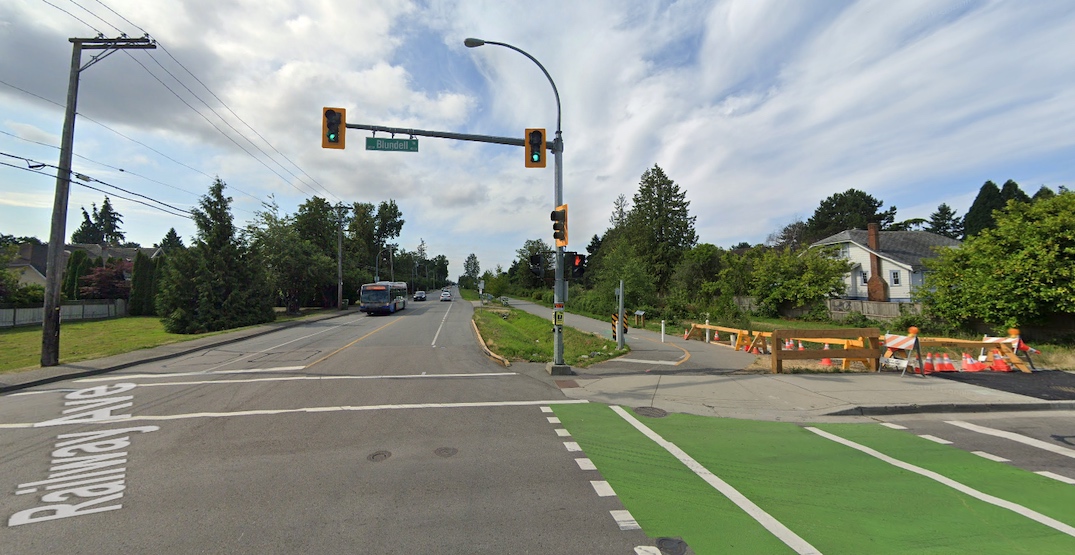 Such dense growth adding 77,000 residents along the corridor could eventually lead TransLink to consider increased bus services or a rail rapid transit study, but there is no guarantee for implementation, especially with the region’s higher competing priority projects and limited funding availability.

Any decision to increase the city-wide population growth projections through 2041 by nearly 30% would have implications for the city’s Regional Context Statement, which is required for compliance with the Regional Growth Strategy and provincial legislation. It would see high scrutiny, as this growth is located outside of the city centre, effectively introducing a new urban centre.

“Increasing the City’s population and employment along an isolated corridor that does not connect designated Neighbourhood Centres and/or Area Plans that are identified as future growth centres, is inconsistent with fundamental Official Community Plan (OCP) population, employment and land use planning policies,” reads the city staff report.

“The OCP currently concentrates the tallest building height at designated village centres in the City Centre, and limits the areas where mid-rise development is permitted outside of City Centre.” 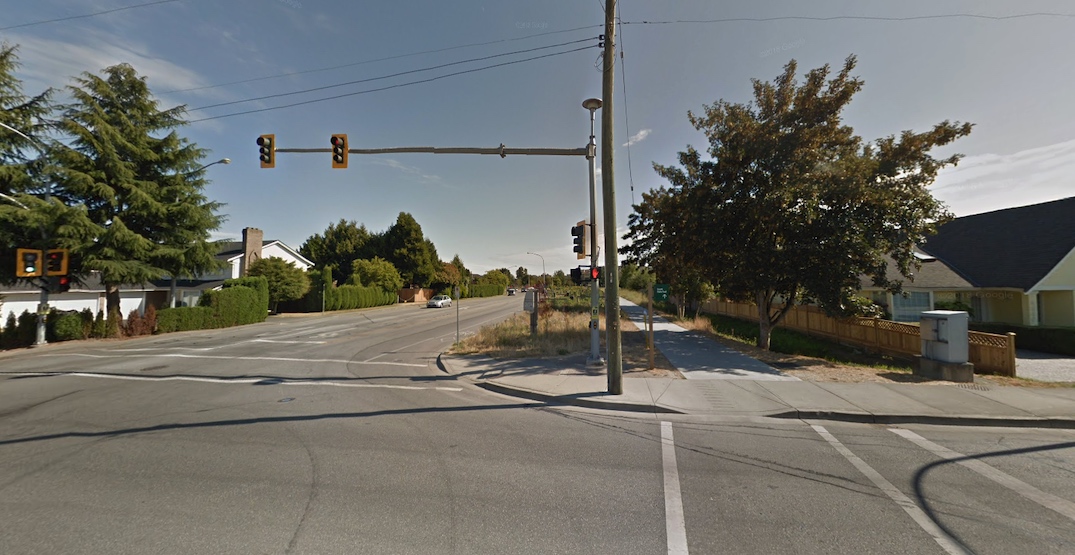 This analysis was conducted by city staff upon the request of the city council, and they “would like to reinforce that there is no simple formula of population density plus employment equals rapid transit (rail) service.”

“Changing land use designations to support rail rapid transit service within the Railway Avenue Corridor would require decades of gradual land-use change, and still might not result in the type or level of transit service desired,” continues the report.

City staff recommend the existing land use designations outlined in the OCP and identified for arterial roads to be maintained, and major transit-oriented development growth continue to be focused in the city centre near Canada Line stations and in existing urban centres.

In 2019, the city council rejected TransLink’s proposal to integrate a new and expanded Steveston bus exchange with the municipal government’s planned project of building a new replacement Steveston Community Centre and library. It was proposed for the surface parking lot east of the existing community centre. 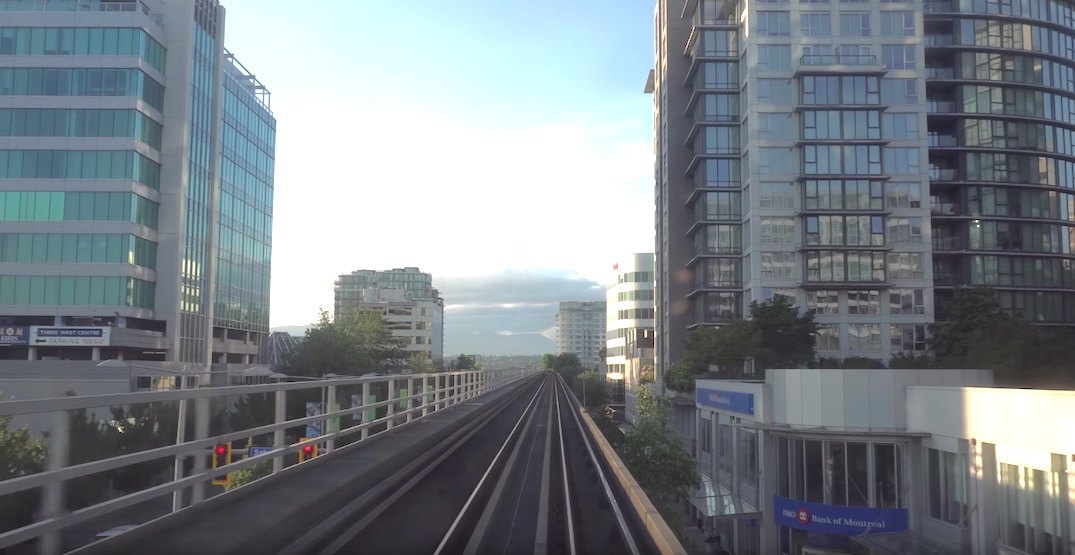 The single track of the Canada Line between Richmond-Brighouse Station and Lansdowne Station, looking north. (All Over Vancouver/YouTube screenshot)