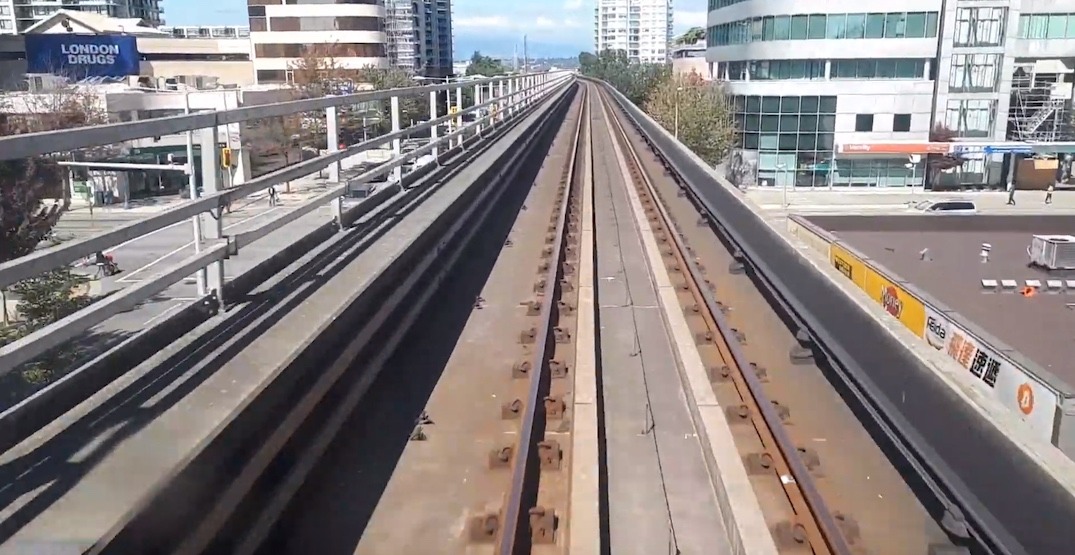 For consideration for further deliberation and inclusion in TransLink’s process, the City of Richmond has outlined its list of ideas and concepts for long-term transportation improvements within Richmond and connecting with other areas of the region.

In a report presented to city council this week, city staff said the following ideas will help reach the municipality’s goal of a public transit and active transportation mode shift target of at least 50% of all trips in the city:

More upgrades for the Canada Line

The existing single tracking restricts reliability and the full potential of the Canada Line’s train frequencies.

The terminus tracks of the Canada Line in Richmond and Sea Island were single tracked to cut costs. At the time the decision was made nearly 15 years ago, Richmond and Canada Line planners also reasoned that a narrower, less bulky elevated guideway with a single track through Richmond City Centre would address some of the street aesthetic concerns.

The report also states there is a need to lengthen the platforms to the ultimate 50-metre length standard and “other complementary station upgrades to improve passenger circulation.”

This is in addition to the Mayors’ Council’s Phase One plan of a $35-million project to expand the train yard at the Bridgeport Operations and Maintenance Centre for the arrival of an additional 12 two-car trains to increase capacity by up to 30%, and the addition of escalators to the platform level at all three downtown Vancouver stations. Both projects are currently underway.

TransLink is also planning a further $52-million upgrade of the Canada Line that improves capacity, accessibility, and customer amenities in the unfunded Phase Three transit improvement plan, but at the moment the exact details of these upgrades have not been confirmed.

“Further upgrades are required to meet continued growing demand and maximize the quality of experience so that riding the train is a comfortable and convenient option,” reads the report.

Outside of the TransLink plan, the City of Richmond has successfully fundraised the required funding needed to build the Canada Line’s new additional Capstan Station between Bridgeport Station and Aberdeen Station.

The city wants TransLink to reactivate a north-south service from Richmond City Centre to Vancouver via Granville Street, effectively mirroring the former 98 B-Line service that was replaced by the Canada Line a decade ago.

Such a restored service on Granville Street connecting Vancouver and Richmond would be complementary to the Canada Line “along a high demand corridor that improves access to/from Vancouver while also enhancing the resiliency in the transit network.”

City staff note the existing No. 10 trolley route between downtown Vancouver and Marpole Loop was ranked in 2018 as the 17th busiest bus route in the region with 15,860 average weekday boardings.

As part of the Mayors’ Council Phase Two plan, TransLink plans to launch a new RapidBus service between Richmond-Brighouse Station and an Expo Line station (likely Metrotown) in 2021.

LRT or BRT to Steveston

Very early preliminary analysis identified two possible route options. The first option that currently sees the most bus ridership would run along Westminster Highway and No. 1 Road, while the second option would utilize Granville Avenue and the former railway corridor that parallels Railway Avenue.

TransLink already has an eye on improving bus connections in Steveston. However, in July, city council rejected the public transit authority’s proposal of using city-owned land at Steveston Community Park for a purpose-built bus loop and layover facility. The facility would be integrated with an adjacent new facility for the local community centre and library.

“Should transit ridership between the City Centre and Steveston continue to grow and warrant the progression of higher orders of transit service from bus rapid transit to rail rapid transit, the location of a rail terminus in Steveston depends upon the rapid transit alignment and the ultimate site of the planned transit exchange upgrade,” reads the city staff report.

To support improved and expanded bus services, construction begins this fall on a new purpose-built bus loop at Richmond-Brighouse Station.

City staff have identified a need for a new rapid transit service between a Canada Line station and communities further south of the Fraser via the planned new George Massey crossing.

The municipal government wants to see a new separate pedestrian and cyclist crossing on the existing Arthur Laing Bridge or on a new parallel route on the corridor. This would directly connect with the City of Vancouver’s Arbutus Greenway.

It also desires to fulfill its Richmond City Centre master plan of building a new pedestrian and cycling bridge across the middle arm of the Fraser River between the west end of Cambie Road (near Aberdeen Station) and Sea Island.

Additional cycling lane infrastructure is suggested for the Knight Street Bridge and Dinsmore Bridge, and city staff brought up the possibility of small passenger ferries in the Fraser River connecting major destinations and points of interest. 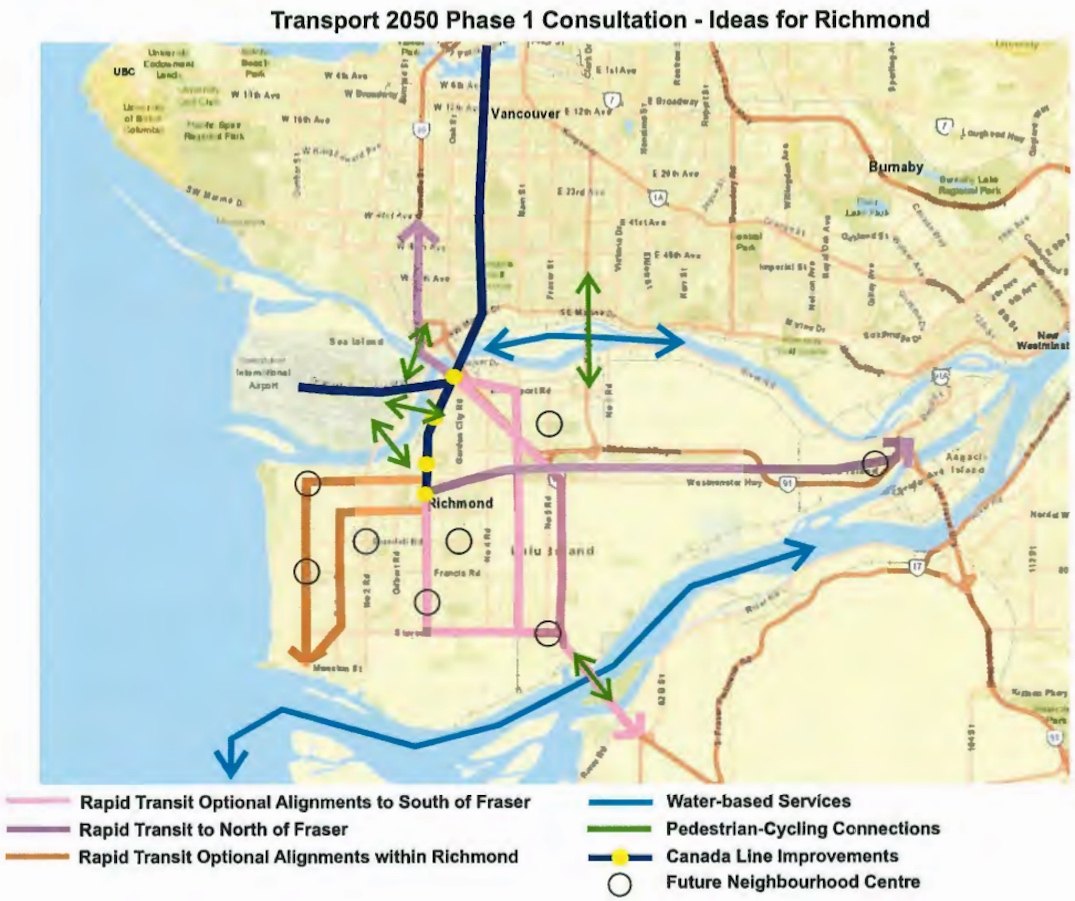 TransLink concluded the first phase of its Transport 2050 public consultation earlier this month. Suggestions submitted by the public, municipal governments, businesses, and other organizations in the first phase will be used to develop and propose new strategies and priorities for the 30-year plan, which will go through new rounds of public consultation. The third and final phase in late-2020 will finalize the new regional transportation strategy.