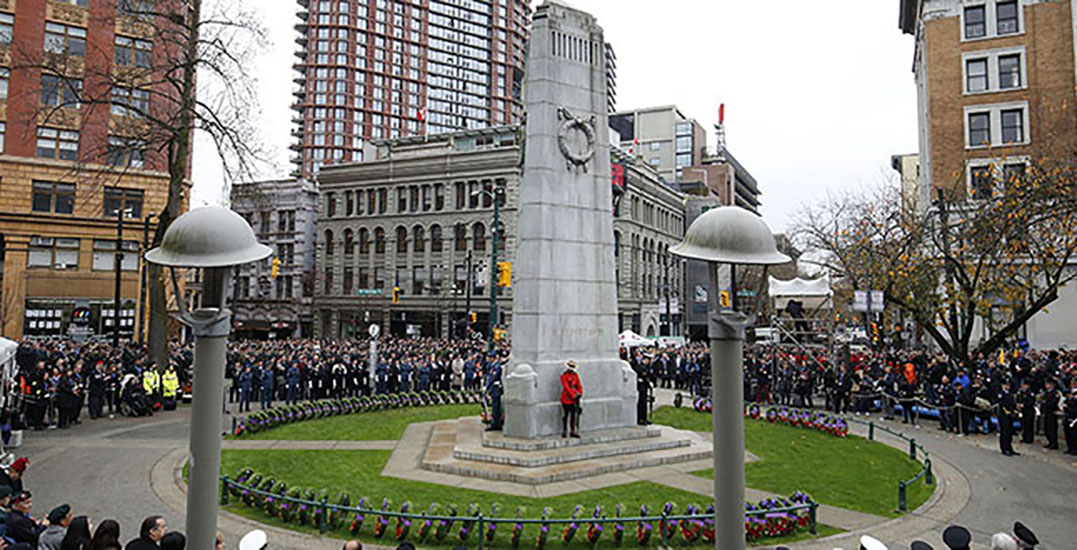 As millions of Canadians pay their respects to soldiers – past and present – here are all the Remembrance Day ceremonies you can attend in Metro Vancouver on Sunday, November 11, 2018.

Vehicles displaying BC veteran licence plates will be exempt from parking fees for Veterans Week, November 4 to 11.

This includes City of Vancouver parking meters, EasyPark parkades, surface lots, and Park Board operated parking facilities. Popular destinations such as Stanley Park, Queen Elizabeth Park, and the Vancouver Aquatic Centre are included, as well as all community centres.

In addition, veterans can ride for free on all TransLink services on Sunday, November 11 by presenting their military ID or record of service card.

One accessible fare gate will be left open at all SkyTrain, Canada Line, and SeaBus stations.

Note that unless specified otherwise, all events will take place on Sunday, November 11.

On Thursday, November 8, ahead of the main November 11 ceremony, Aboriginal veterans will host a ceremony at the Victory Square Cenotaph.

A march will begin at Carnegie Community Centre at 10:45 am and follow with a wreath laying ceremony at 11 am. A reception will follow.

A ceremony will begin with a performance by the Vancouver Bach Youth Choir and Sarabande.

At 10:10 am, veterans, military marching units, and bands will be led to Victory Square by the Vancouver Flag Party for a cenotaph ceremony starting at 10:30 am.

Combined performances by the Vancouver Fire and Rescue Services and the Regimental Pipes and Drums of the Seaforth Highlanders of Canada will follow.

At 11 am, the last post will be sounded. Two minutes of silence will take place, as well as a 21-gun salute by the 15th Field Artillery Regiment. The Royal Canadian Air Force will conduct a fly-by moments later, should weather permit.

The ceremony concludes with a performance by the Bach Youth Choir and Sarabande and wreaths being placed at the Cenotaph.

A parade will begin once the ceremony finishes with participants marching west along Hastings past the reviewing stand between Homer and Richards, turning right at Richards, east on Cordova, then south on Cambie.

Where: Stanley Park, Vancouver (near the Vancouver Aquarium)
Time: 10:40 am

The Remembrance Day Ceremony at UBC will be held on Sunday, November 11 and will include short readings, remarks from special guests and musical performances by the UBC Opera Ensemble.

Time: Doors open at 10 am; ceremony begins at 10:45 am
Where: The UBC War Memorial Gym – 6081 University Boulevard, Vancouver

A special Tribute will take place on the eve of the 100th Anniversary of the End of the First World War.

A commemoration event will start with a parade and a service of remembrance on Saturday, November 10 at 3 pm, followed by the placing of 6,000 handmade poppies and 100 candles on the graves of 4,000 veterans.

Afterwards, an all-night vigil will take place until 3 pm on Sunday, November 11.

Time: 3 pm to 3 pm (the next day)
Where: Mountainview Cemetery – 5455 Fraser Street, Vancouver

Time: 9 am
Where: The Royal Vancouver Yacht Club – 3811 Point Grey Road, Vancouver (can be viewed from Hastings Mill Park)

A parade will begin at 10:40 am, starting from the underground parking lot of the McGill Library on 4595 Albert Street.

A parade and ceremony by the Royal Canadian Legion Branch #83 will begin from Fire Hall #3 on 6511 Marlborough Avenue.

The parade will move west of Bennett Street, south of Nelson Avenue and southwest onto Jubilee Avenue. The ceremony at Bonsor Park begins at 11 am.

A march will take place from the Como Lake Middle School along Winslow Street to the Cenotaph on Veterans Way at Blue Mountain Park.

A ceremony will take place at 10:40 am with a reception held afterwards at the North Delta Recreation Centre.

A parade will take place from the Legion at 4896 Delta Street to the Cenotaph at Memorial Park for the 10:45 am ceremony.

A special appearance will be made by the Delta Police Pipe Band, as well as light refreshments following the ceremony.

A procession will take place at 10:45 leaving Old Yale Road, turning onto 268 Street and then moving west on the Fraser Highway to the Aldergrove Legion at 26607 Fraser Highway.

Then, a ceremony takes place at the Aldergrove Legion Cenotaph. Hymns, poems, messages, the laying of wreaths and two minutes of silence will take place, followed by a flypast by the Fraser Blues.

A flypast of the Fraser Blues will take place at 11 am.

Starting with a procession at the south end of the Murrayville Cemetary, a ceremony will take place with poems, songs, remembrances and a flypast of the Fraser Blues.

Anyone who wishes to sit will need to bring their own lawn chairs.

The public is invited to walk through the garden and light a candle or plant poppy seeds in remembrance of those who served and continue to serve.

A parade will take place at 10:30 am starting from the Legion Building on 22 Street to the cenotaph in Memorial Peace Park.

An official ceremony will start right after the parade.

A ceremony will take place inside the Armouries, followed by a parade to the Cenotaph at the front of City Hall. Two minutes of silence will be observed at 11 am, followed by a wreath-laying ceremony and a march past Royal Avenue.

Time: 9:45 am
Where: The Royal Regiment, Armouries, and at Queens Avenue United Church, New Westminster

30 members of the military will be dressed in authentic First World War uniforms from 1918.

The ceremony will take place at the Cenotaph in Victoria Park at 10:45, followed by a Veteran’s parade. The parade will be lead by the JP Fell Pipe Band and move from Lonsdale Avenue to St. George.

Organized by the Burrard Yacht Club and RCL Branch 114, the ceremony will take place on the water by the beach at Roche Point.

A ceremony, which starts at 10:30 am, will include processions, speeches, and a two-minute observance of silence at 11 am, in memory of those who have lost their lives.

This indoor service will take place prior to a parade moving from Wilson Centre to the Cenotaph services at Veterans Park.

This outdoor service will honour those who served and died in service of our country. The event is sponsored by the Royal Canadian Legion, Branch #133. Note that road closures will be in effect from 8 am to 12 pm and that limited parking is available.

The ceremony begins at 9:30 am, followed by a parade at 10:30 am and a ceremony at 11 am taking place at the Port Moody Arts Centre.

The ceremony will take place at the Cloverdale Cenotaph, next door to the Surrey Museum and the Surrey Archives at 9:30 am.

Children will be able to make “peaceful crafts,” visitors can write thank you notes on postcards that will be delivered to veterans and their families, and a WWII documentary will be played at the Museum theatre.

The Service will start at 10:30 am, followed by a laying of wreaths and a fly past. This service will be entirely inside.

A parade will take place at 10 am with a march to the Cenotaph and a ceremony starting at 10:25 am. Refreshment and snacks will be available for the public and youth following the service.

A parade and service will take place on Marine Drive at 20th in West Vancouver from 10:30 am to 12 pm.