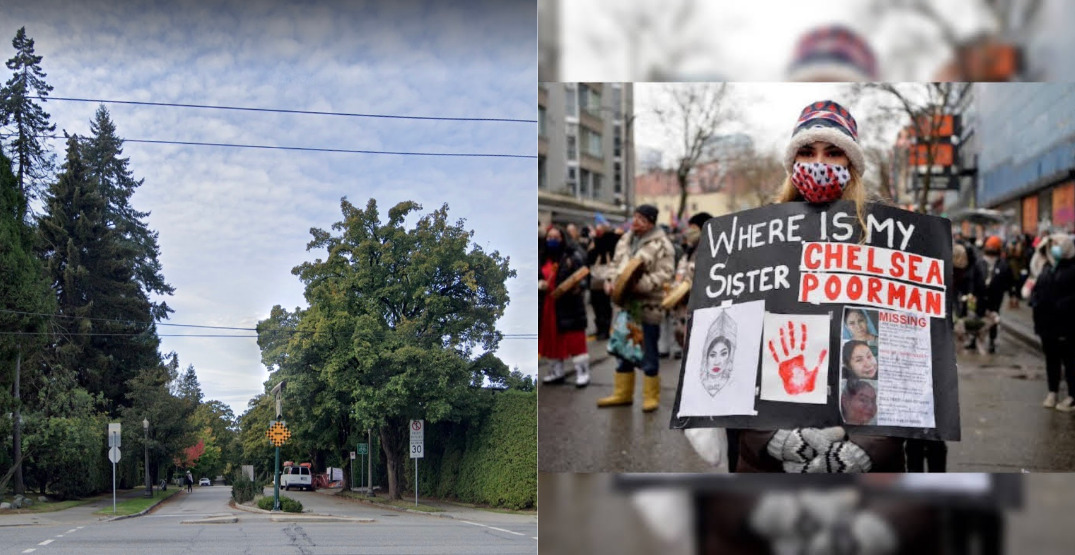 The neighbourhood the body was discovered in. (Google Maps | Bring My Sister Chelsea Home/Facebook)

Chelsea Poorman went missing on September 8, 2020, when she was just 24-years-old, and less than two years later her remains have been discovered in Shaughnessy.

Poorman’s remains were located outside of an empty house in the Vancouver neighbourhood late last month, near Granville Street and West 37th Avenue.

“This is not the outcome anyone wanted. We always hoped Chelsea would be found alive, and our sympathies go out to everyone who knew Chelsea, loved her, and hoped she would come home safely,” VPD Sergeant Steve Addison said in a statement.

Poorman was last seen by a family member two days before she went missing on Granville Street. The VPD Missing Persons Unit launched an investigation that was later turned over to the Major Crimes Section.

“A senior investigation team continued to look for Chelsea until she was discovered on April 22 by contractors working at a vacant house near Granville Street and West 37th Avenue,” reads a VPD statement.

#VPDNews: The search for Chelsea Poorman, a Vancouver woman missing since September 2020, has ended tragically. Her remains have been discovered outside an empty house in Shaughnessy. https://t.co/YkPi1pYaDt pic.twitter.com/v9Qy8nA2Md

The BC Coroners Service was immediately notified after her remains were found and the VPD has now received the findings from the investigation that the coroner conducted.

According to investigators, Poorman died on the property the night that she disappeared or shortly thereafter. The VPD states she likely went undiscovered because the house has been vacant for years, and it also stated that her death is not suspicious.

Poorman’s family has been contacted and informed that her remains have been found.