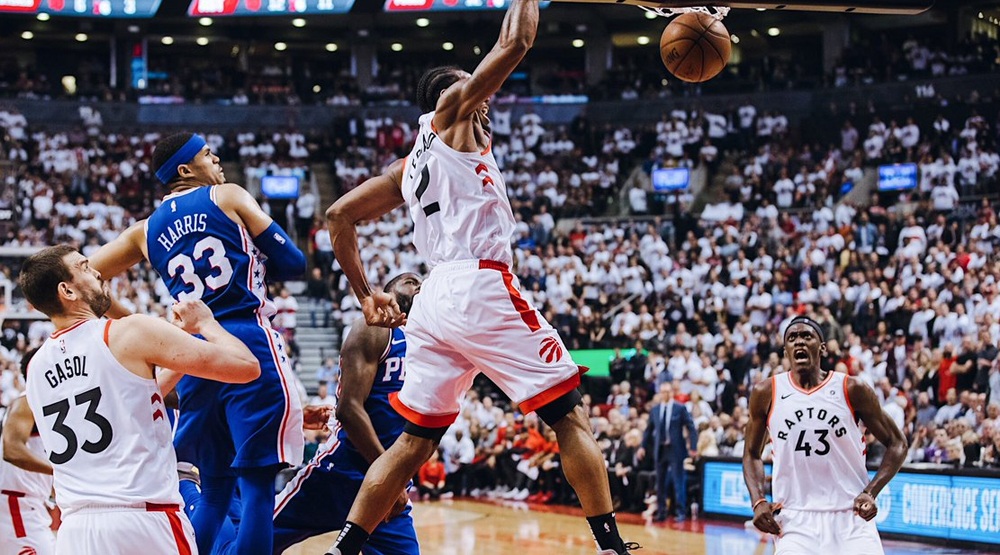 The Toronto Raptors are one win away from punching their ticket to the Eastern Conference Finals.

The Raps dominated the Philadelphia 76ers in Game 5, cruising to a 125-89 victory on Tuesday – the largest margin of victory in a playoff game for Toronto.

#WeTheNorth set franchise record for their largest margin of victory in a playoff game.

3 of their 6 biggest wins have come in 2019 pic.twitter.com/xHY8xZ5RWk

After looking lost at times through Games 2 and 3, the Raptors put forth their best all-around team effort. Kawhi Leonard didn’t need to be superhuman to will the Raptors to victory, as everybody on the floor contributed in the team’s best all-around effort in the playoffs this year.

As usual, Leonard drove the bus on offence, scoring 21 points and contributing 13 rebounds. Kawhi punctuated the end of the second half with this incredible dunk through traffic, which caused Raptors fans (and play-by-play man Matt Devlin) to lose their minds.

What we’re witnessing with Kawhi in the NBA playoffs this year is something that’s truly special. The 76ers had no answer to this monster jam.

This Kawhi guy will not be denied pic.twitter.com/MPEA15h5Ql

Just in case Kawhi wasn’t done with posterizing the 76ers players, he came completely out of nowhere to dunk on 7-foot centre Joel Embiid. Leonard is playing on a different planet in the playoffs right now.

The reaction from the Raptors bench might be the best part of this dunk.

Watch the @Raptors on SN and SN NOW. https://t.co/vMsgyF5Mcz pic.twitter.com/LjzevAv6DX

The Raptors went out in front with a 21-point lead at the end of the first half. It matched the biggest lead the Raps held over the 76ers at any point during this series, going up 64-43.

It was Toronto’s bench who showed up in a big way; they chipped in to score a combined 32 in Game 5. With some extra playing time in the final minutes of the fourth quarter, the Raptors bench took over and held their own against the 76ers defence.

Danny Green looked like his old self from beyond the arc and drained five three-pointers on seven attempts. Overall, he contributed 17 points and five rebounds.

Game 6 turns to Philadelphia on Thursday with a chance for the Raptors to advance to the Eastern Conference Finals for the second time in Raptors franchise history.