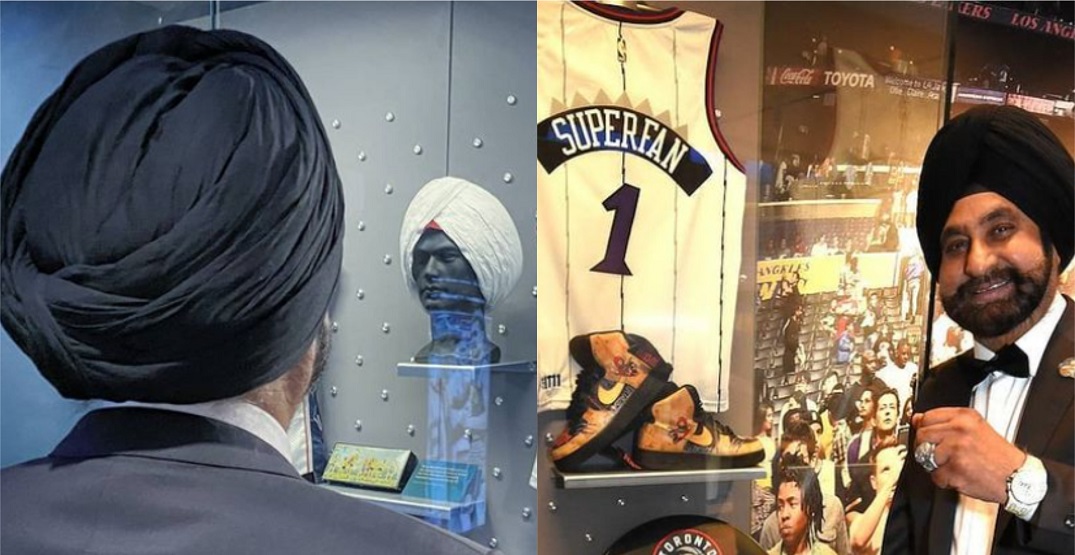 Toronto Raptors Superfan Nav Bhatia has been well known among the local fanbase for years, but he has grown to global superstardom over the last few seasons.

Bhatia, who moved to Canada from India in the early 1980s, earned the title of Raptors Superfan through his appearances at every home game since 1995.

Bhatia served as the grand marshal of the Raptors’ championship parade in 2019, and was honoured at the Basketball Hall of Fame earlier this year as part of an inaugural fan exhibit.

Bhatia received an official championship ring for his role as a Raptors’ unofficial ambassador.

Bhatia said the Hall of Fame was an emotional experience for him, and he was moved to tears when he saw his outfit displayed, including the turban he wore during the Raptors’ Game 6 championship victory over the Golden State Warriors.

“I saw my jacket, my shoes, my T-shirt, my championship ring and all the other things and then I saw my turban there… I started crying because it was giving me goosebumps,” Bhatia said about being inducted. “Talking about that right now gives me goosebumps. That is something you don’t dream of as a fan.”

Who has the Superfan liked on the Raptors so far?

Bhatia has already integrated himself with the team’s rookie star.

“Just before the season started, I had a two-three hour meeting with Scottie Barnes,” Bhatia said in an interview with Daily Hive. “It was like a father-to-son meeting, but also just a very good meeting, I would say.”

Bhatia said he’s been impressed with Barnes’ play this season, as he’s averaged 17 points, 8.2 rebounds, and 2.4 assists per night through five games.

“Barnes might be the rookie of the year,” Bhatia said. “He brings a lot of energy. He’s always smiling [and has the] right attitude.”

Bhatia gave a shoutout as well as two of the Raptors’ new players in guard Dalano Banton and forward Precious Achiuwa.

“Precious is an amazing, not just a good player,” Bhatia said. “He is a double-double player. Every night you will see he will be close to a double-double.”

In the meeting, Barnes and Bhatia discussed what to expect while living in Toronto.

“He loves Toronto. He loves the diversity in Toronto. And that’s very important,” Bhatia said of what he and Barnes spoke about. “Same thing with Precious… They have seen different kinds of food or different kinds of people and all that and they love it.”

Being a community leader

Bhatia was forced to stay at home during the COVID-19 pandemic last season as the team played their home games in Tampa.

But while Bhatia said it’s great to be back at Scotiabank Arena and meeting up with fellow Raptors fans, he’s taken on a new initiative with the Not Another Minute campaign aimed at preventing deaths caused by cardiovascular disease (CVD).

Recent stats from the American Heart Association show that nearly 80% of CVD deaths are preventable with proper medical treatment.

Bhatia, who has dealt with cardiovascular issues in the past, encourages people to chat to their family members about visiting a cardiologist, which he says he does regularly.

“When one person dies, it doesn’t just affect one person. It affects hundreds of people who are attached to that person. The onus is on everybody,” Bhatia added. “But especially it’s on the kids to motivate their parents to take an extra walk, to make some simple life changes, and change their food habits. And this is good not just for the parents, but also the people around them.”

Bhatia added that the South Asian community can be at particularly high risk for CVD due to traditional food choices that can be high in oil.

“I make sure that I’m going to the doctor just like I take my car every 10,000 kilometres for an oil change and checkup,” Bhatia added.

Bhatia said he sees his presence as a public figure as a key reason why he finds it important to speak out about CVD prevention.

“Being prominent comes with some responsibilities,” he added.

When it comes to the Raptors’ leadership group, Bhatia said he’s eagerly awaiting the return of Pascal Siakam from an offseason shoulder surgery.

“[Fred] VanVleet is a leader,” Bhatia added. “OG [Anunoby] is going to be, I believe, the most improved player this year in the NBA. They are gelling very nicely.”

While some have written off the Raptors as a team destined for the bottom of the league, Bhatia said he sees the team having postseason aspirations.