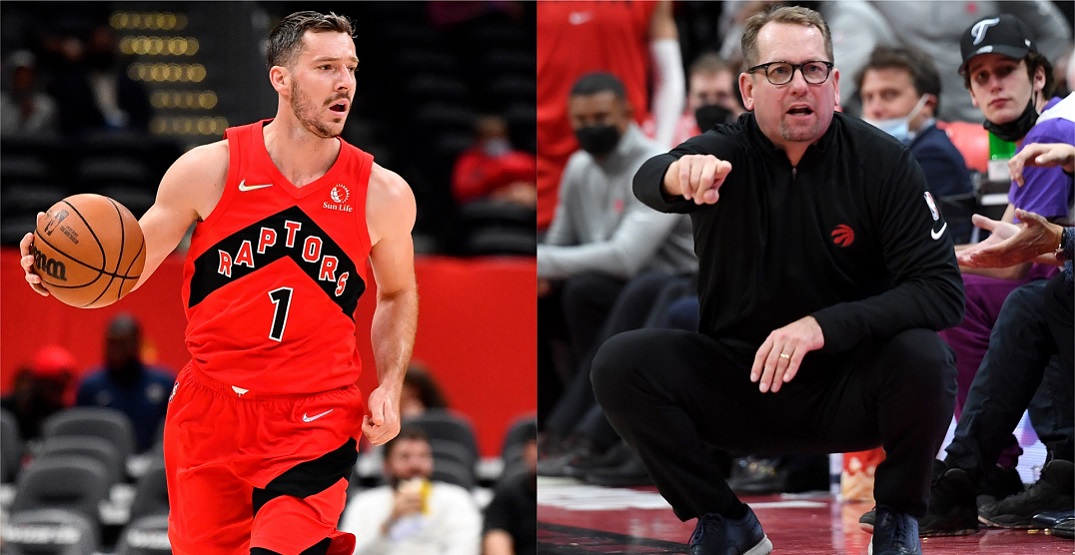 It hasn’t taken much time for Goran Dragic to fall out of favour since coming to Toronto this summer in a sign-and-trade for Kyle Lowry.

Dragic, the veteran guard and a former All-Star, did not play at all in Toronto’s 118–100 victory over the Indiana Pacers last night.

Dragic, 35, is the team’s third-highest paid player, making $16 million this year on the final year of his contract.

He got off to a rocky start with Raptors fans with since-apologized-for comments that Toronto was not his “preferred destination.”

For the Raptors, it’s not quite clear how they’ll be using Dragic over the course of this season. He’s openly stated he’d like to play for a contender, and it’s clear that Toronto is still a few steps away from being a top NBA team.

But it’s tough for the Raptors to juggle the opportunity to showcase Dragic to potential trade suitors if he continues to struggle on the court.

After playing just under 22 minutes in the season opener as a starter, Dragic failed to play more than 14:28 in any of the following three games off the bench, before sitting all of last night.

Part of the factor driving him further down the rotation is Dragic’s play, which has been less than desirable to watch this season. He’s put up just two assists in his last three games, while shooting 4-15 from the field.

If he doesn’t find his way on the outs via trade, a contract buyout is possible, meaning the Raptors would remain on the hook for part or all of the remainder of Dragic’s deal, and he’d be able to sign elsewhere.

Then, of course, there’s the rise of 2021 second round pick (and a Toronto native) Dalano Banton, who has been eating up minutes Dragic could be playing.

Banton played just over 16 minutes last night, his most in his brief five-game NBA career. He put up a stat line of 10 points, three assists, one block and a rebound.

82% of Banton’s 45 minutes this year have come without Dragic on the floor. And even if Nurse isn’t directly saying they’re in competition with one another, his lineup choices are doing the talking for him.

But another thing that’s clear to anyone watching the Raptors this season has been the pace they’ve been playing with anytime Banton’s hit the court. When he’s on the floor this year, Toronto has a +25 mark, second on the team only behind Gary Trent Jr.’s +44.

“We asked him to pick up the speed and he’s done it quite naturally,” Nurse said of Banton.

Meanwhile, Dragic has a -28 mark, the lowest on the team.

Banton’s been embracing his role with the team in his first NBA season.

“They put me in positions to succeed,” Banton said. “Playing with pace is just better for the whole team. Just being able to run, we’re able to be at our best. If we continue to play with pace, the sky’s gonna be the limit for us.”

Nurse insisted that Dragic’s benching was actually made to get another player on the roster more minutes.

“It was geared towards Chris Boucher,” Nurse said. “I wanted to get Chris into an early subbing situation. I thought [subbing in Banton and Boucher] early together would be a good combo.”

Boucher and Banton came into the game together with 4:31 left in the first quarter, Banton’s earliest appearance of the season so far.

But Thursday’s practice showed hints of a potential rift between Dragic and Nurse, with Nurse saying they haven’t spoken since the game.

Nurse said he hasn't had a chance to speak with Dragic after his DNP-CD last night, but spoke with him before.

As of now, it’s unclear exactly what’s next for the Raptors when it comes to Dragic.

Just five games into the season, it’s still early enough that he could be able to turn it around, and is just taking some time to get things going. But at age 35, it’s also quite possible his best days are long gone, and he’s just clogging up a roster spot for younger players based on his pedigree.

Complicating Toronto’s rotations is second-year guard Malachi Flynn, who the Raptors picked in the first round of the 2020 draft.

Flynn played 47 games for Toronto last year, as well as spending six games in the G League with Raptors 905.

But Flynn, who looked like he could be a big part of Toronto’s future last year, has played just five minutes in total this season, in two situations where the Raptors have been well ahead in eventual wins against Boston and Indiana.

Flynn ultimately is more important to Toronto’s future than Dragic, but it seems like Banton has one-upped him to begin the year.

For now, Toronto’s upcoming games against Orlando, Indiana, and New York should give us a much clearer picture of what to expect from Nurse this season when it comes to how he’ll be deploying his guard trio.