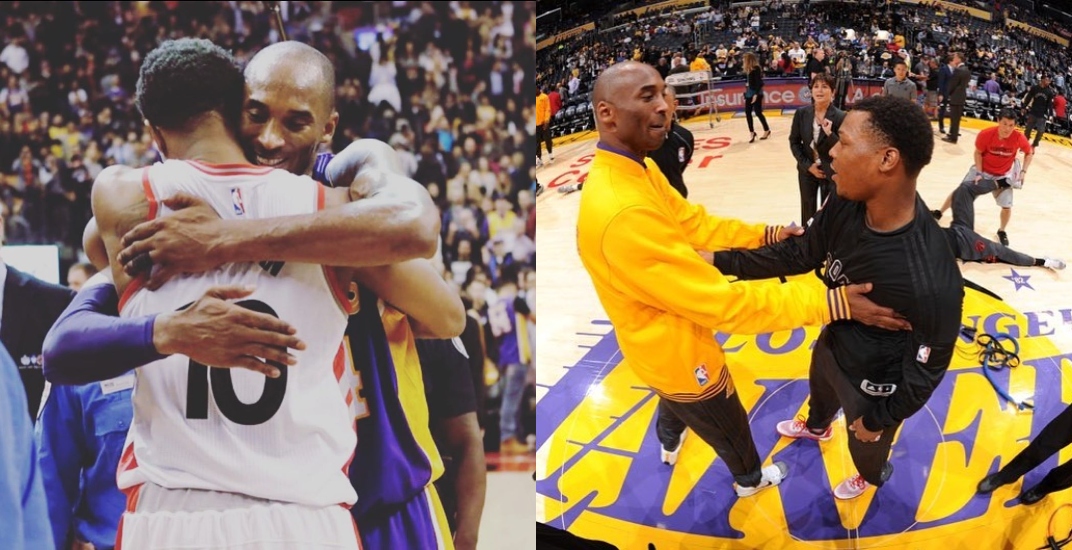 Though he played his entire 20-year NBA career with the Los Angeles Lakers, Kobe Bryant transcended the game of basketball.

The news of Kobe’s death sent shockwaves through the entire world, and that included members of the Toronto Raptors, past and present.

The Raptors released an official statement on Sunday, and gave an unofficial tribute for Kobe to start their game in San Antonio by purposely running out the 24-second shot clock.

“It was just last [weekend] that we paused to remember some of the many great moments Kobe provided to basketball fans all over the world,” the Raptors said in their statement. “We marvelled at his passion for our game and at his tremendous skills — some of which he memorably unleashed against our team.

“We are thinking of Kobe and his daughter Gianna, and of his teammates, his friends, and most especially his loved ones. Along with our NBA family, we are united in grief and deeply saddened at the loss of one of the greatest players in our sport, who was taken far too soon. We send our condolences to the Lakers, and especially to his wife Vanessa and to his daughters, who will forever miss their father and sister.”

The news affected everyone in the basketball world deeply.

Kawhi Leonard holds back tears addressing the passing of Lakers legend Kobe Bryant – “Knowing him personally, I know he’d want me to come out here & ball & still just be great… Everybody’s sad. No words can explain the impact he had on the sport… It’s just sad.”#Clippers pic.twitter.com/Q1JLPMaYuT

Norman Powell, who grew up in Southern California, wears No. 24 with the Raptors because of Kobe. DeMar DeRozan is from Compton, and was 10-years-old when Kobe won his first title with the Lakers in 2000.

Those players and others — including Kyle Lowry, Vince Carter, Serge Ibaka, Rondae Hollis-Jefferson, Jeremy Lin, and Danny Green — all shared beautiful tributes for the legendary future Hall of Famer on social media.

You taught me everything. Rest Well Bean & GiGi Mamba Forever!

he was being able to watch his girls grow up. We mentioned how we will do for our daughters to the best of our abilities and now you’re headed to a better place on my bday smh. Rest up legend & Long Live “The Mamba” 🐍 🙏🏽
Many prayers to the Bryant family…. pic.twitter.com/hViLULxA2B

The only reason why I wear the number 24. I learned all about the grind and what it means to be a competitor from you. Rest In Peace Kobe & GiGi #mambasforever

RIP Kobe 🙏🏼🙏🏼 From sharing the same bday to opponents to teammates…respect for everything you did for the game and world. Gone too soon, lifes truly too precious #legend

This is so crazy, We just seen you! Been sitting here thinking of what to say…and there are absolutely no words that can truly describe what you meant to me, my friends and family, and the basketball world/culture that we live in today. We’ve had many so many battles on the court and so many brief interactions off the court but extremely meaningful to me and I’ll never forget them. You were an icon and an idol to us all! You were a God! and your legacy will forever live on. This season will be dedicated to you and the others we’ve lost today. prayers and condolences go out to the Bryant family and the other families that were on board. #RIPKobenGiGi #childhoodnadulthoodhero #824Forever #Mambamentality #JobnotFinished 🙏🏽🙏🏽🙏🏽💚💚💚 #Thisonereallyhurts 💜💛💜💛💜