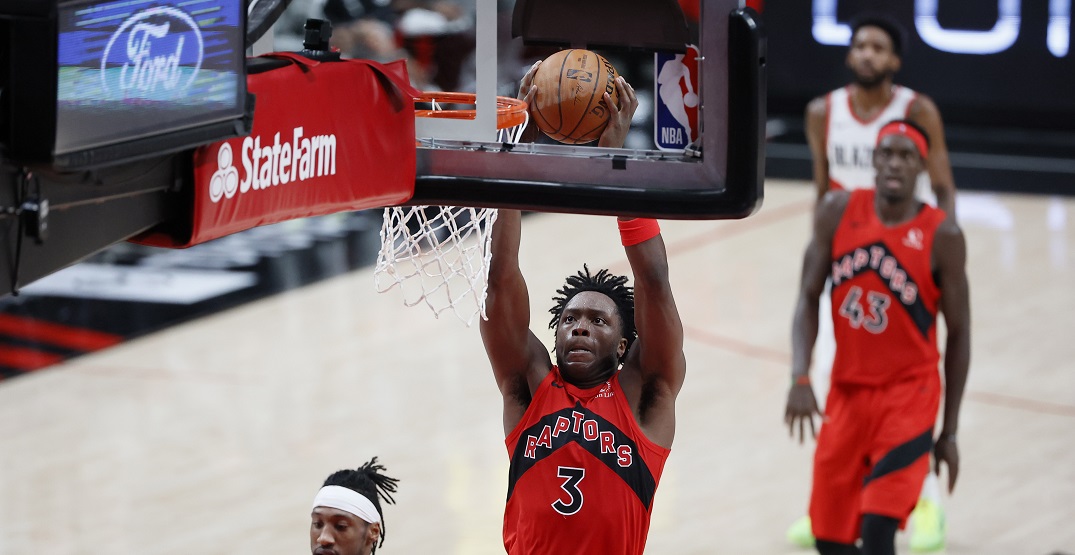 Toronto Raptors small forward OG Anunoby has been through a lot of growth in his four-year NBA career so far.

Since coming into the league in 2017-18, Anunoby has developed into one of the league’s most versatile two-way assets. He’s been picked as the 59th best player league-wide in a recent Sports Illustrated ranking ahead of this season.

At age 24 on one of the league’s youngest and least experienced rosters, Anunoby is suddenly approaching “NBA veteran” territory. It’s an odd thing to think about, but he actually has the fourth-most career games played of any active Toronto player.

Anunoby’s known for being reserved, but not all players need to be overly vocal. Kawhi Leonard’s career has given players like Anunoby enough proof that being loud isn’t a prerequisite for NBA success.

But it’s clear that Anunoby’s expectations will be sky-high as he heads into the second year of a four-year deal.

Here’s why the Raptors need OG Anunoby to step up as a leader on the court this season:

His offensive game has come around

When the Raptors drafted Anunoby out of Indiana in the first round back in 2017, there were some questions as to how he’d fit on an NBA roster.

Dealing with an ACL tear in his draft year, his defensive upside was high but there were no certainties about his offensive capabilities.

Being tossed into a starting role 64 times in his 72-game rookie season in 2017-18, Anunoby wasn’t much of a factor on the Raptors offence in his 20 minutes a night. On 21 occasions, he scored three points or less.

Anunoby found then himself on the bench for the 2018-19 as Kawhi Leonard took his spot, but still averaged 20 minutes that year. After dealing with an appendix removal that caused him to miss the entirety of the 2019 playoffs, Anunoby found himself back in the starting lineup the following year.

In his third year in the league, Anunoby saw his minutes increase to 29.9 per night as the Raptors finished second in the Eastern Conference. Anunoby actually finished sixth on the Raptors in scoring with 10.6 points per night, but it was clear he was a key contributor to one of the league’s strongest rotations.

With point guard Kyle Lowry departing, Anunoby will need to chip in just that much more as a key piece of the Raptors’ offence as he’s shown he can be in the past.

Anunoby is no stranger to performing under pressure, having hit one of the most iconic shots in Raptors’ history.

His buzzer-beater against Boston in Game 3 of the second round of the 2020 playoffs essentially saved the Raptors’ season, with the team already in a 2-0 hole against the Celtics.

The play ran on highlight reels for weeks and weeks. It was unquestionably the most iconic play of Anunoby’s career.

But careers aren’t made on just one shot. Nobody talks about the game’s all-time greats and mentions just one good game or play they made. Part of what made that Anunoby game-winner so special was the surprise factor that they’d turn to him over more experienced players in Marc Gasol, Pascal Siakam, or Fred VanVleet.

Anunoby’s already shown he can do it once. For his game — and for the Raptors — to take the next step, he’ll need to continue making shots just like that come crunch time when the expectations are on him.

If 2021 first-round pick Scottie Barnes is looking for a mentor, there’s no better place to look on the Raptors than OG Anunoby.

Barnes had essentially the same scouting report from Florida State that Anunoby got: tenacious defensively but limited in his scoring abilities.

Both are the type of player you’d like covering the other team’s biggest offensive threat.

How Barnes and Anunoby work together could be a key partnership for the Raptors’ rotations. They both play the same position on paper, but part of Barnes’ appeal has been his versatility and willingness to play anywhere on the floor.

If Barnes and Anunoby find some level of chemistry together on the court when the Raptors need a big stop, it will give head coach Nick Nurse plenty of flexibility in what he can do with his rotations.