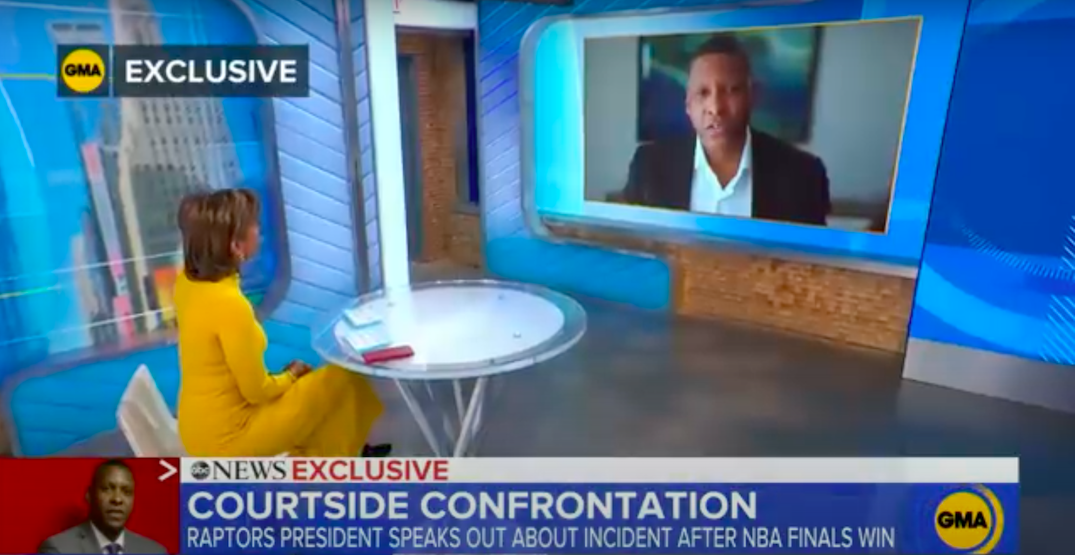 Masai Ujiri gave more details about the altercation involving him and a police officer after the Toronto Raptors won the NBA championship in 2019.

The Raptors president went on Good Morning America to give his perspective.

Ujiri attempted to make his way onto the court at Oracle Arena in Oakland to celebrate with his team, when he was stopped by Alameda County sheriff’s deputy Alan Strickland, who claimed Ujiri didn’t have the proper credentials displayed. This then led to an altercation between the two men, which was caught on camera.

Strickland filed a lawsuit against Ujiri claiming that he suffered “severe emotional and physical distress” which saw the incident thrust back into the spotlight. Ujiri’s lawyers filed a countersuit and Strickland eventually dropped his lawsuit, and so did Ujiri.

“Seeing that tape, you are vindicated, you feel that yes this is the right story,” Ujiri explained. “People said you punched a policeman, you hit his jaw, you punched his jaw and all kinds of things, you begin to doubt yourself. As time goes on, you start to actually wonder what really happened.”

Moving forward, Ujiri feels that the incident has given him a renewed passion to push for more racial equality.

“As much as we say, yeah this happened to me, there’s worse that have happened to other people, right? George Floyd. I lost a moment, people have lost their lives.

“I say it as humble as I can, [there are some people who don’t have] the privilege of the job that I have to fight this — they’re wrongly accused, there’s no bodycams, nobody sees what happens — and they’re incarcerated, or they are accused, or they are charged. We have to fight for them.”

“I want people to really think about humanity and who we are as human beings. It’s really important that we treat each other well.”