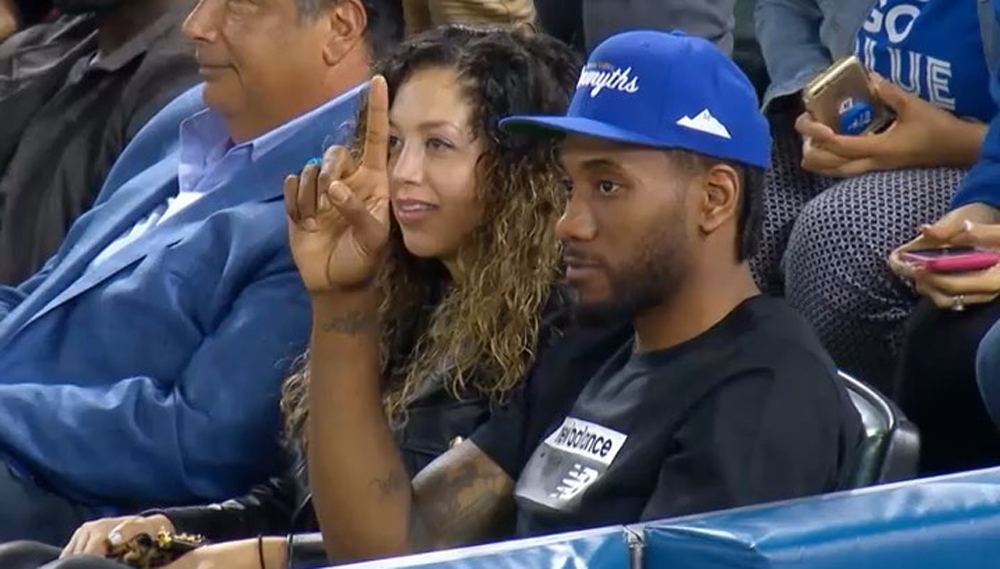 Kawhi Leonard is making the championship circuit around Ontario.

First, he did some sightseeing at Niagara Falls, he was spotted at the Cactus Club the other night, then some intrepid Raps fans saw Leonard buying boxes at a GTA Blue Home Depot. Finally. and the “Board Man” decided to check out a Blue Jays game.

The two-time NBA champ and Finals MVP graced the Rogers Centre crowd with his presence by making a not-so-subtle entrance midway through the Blue Jays-Angels game on Thursday evening.

With the Blue Jays owning the third-worst record in Major League Baseball this year, fans haven’t had much to cheer for as of late, but they gladly rose to their feet for one of the best players in the NBA.

Loudest ovation of the night, by far, goes to Kawhi Leonard. Crowd on their feet here at Rogers Centre. MVP chants starting here as well. #BlueJays

Leonard sat in the front row seats behind home plate, just out of sight of the home plate cameras. Who knew that Leonard was a Jays fan? Or, as a California native, maybe he was showing some love for his hometown Angels.

He may have just been scouting the best baseball player in the world: Mike Trout. After all, game recognize game.

He's staying. If Kawhi was to sign with the Clippers he could film Mike Trout in L.A. pic.twitter.com/TpkZlSIpoA

One thing’s for certain, if Leonard chooses to stay in Toronto and re-sign with the Raptors, he can probably just walk right down to the front row of a Blue Jays game anytime he feels like it, because there’s a seat with his name on it.

After propelling the Raptors to an NBA championship, Leonard can practically eat for free in Toronto for the rest of his life. Why not give him free tickets to whichever Toronto pro sports team he wants to watch, too?

Free Blue Jays season tickets for The Board Man … whatever it takes to convince him to stay with the Raptors.

Kawhi is just casually chatting with the Blue Jays bat boy. This is amazing. He stay. pic.twitter.com/7uV5VPwSTf