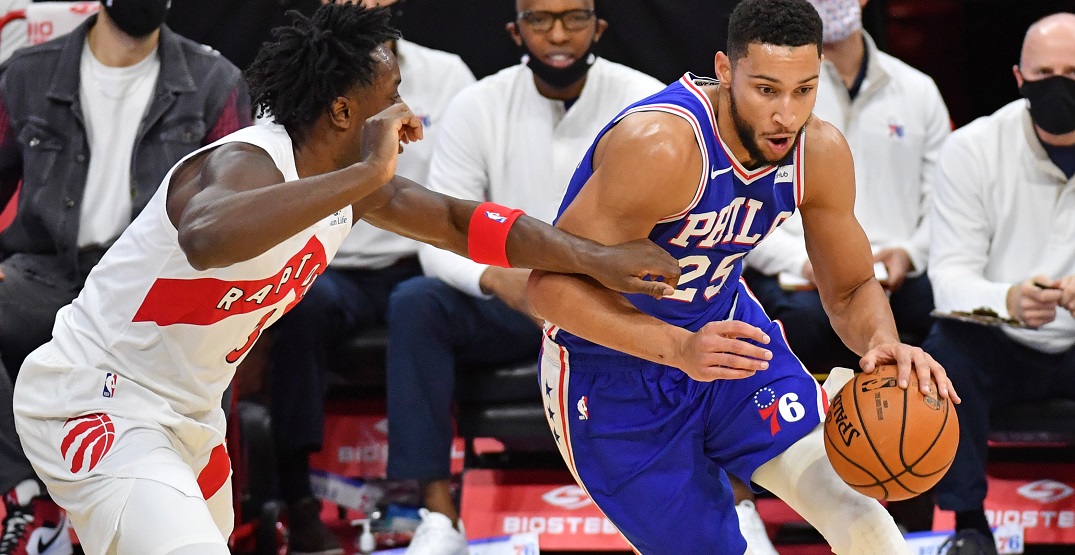 The Toronto Raptors are among the teams that the Philadelphia 76ers are in talks with about trading Ben Simmons too, per The Athletic’s Shams Charania.

Charania also mentioned “several teams” were in the mix for Simmons, including the Minnesota Timberwolves, with both teams making offers for the Australian point guard.

While the chance is still possible that Simmons starts the year in Philadelphia, Charania said that rival executives believe it’s a “matter of when — not if” Simmons does get traded away from the 76ers.

“All signs continue to point to Simmons’ career in Philadelphia coming to an end,” Charania added.

Let’s break down what that move could mean for the Raptors:

Why is Ben Simmons available?

Taken first overall in the 2016 draft, Simmons has had an up-and-down tenure during his time in Philadelphia.

A three-time All-Star, and a two-time member of the NBA’s All-Defensive first team, there’s no denying Simmons has a boatload of talent.

But Simmons’ greatest flaw comes in his poor shooting ability, particularly from three-point range and the free-throw line. In this year’s postseason, Simmons shot just 34.2% on foul shots, the worst percentage in NBA history of a player with at least 67 attempts.

Simmons has only made five three-pointers his whole career on 34 attempts, limiting his game severely on the offensive end of the floor.

Simmons notably struggled in a second-round loss to Atlanta, putting up four games of less than 10 points despite averaging 14.3 points per game in the regular season.

With four years left on a max contract worth $35.4 million per season, Simmons does come with a bit of a reputation of having an incomplete game.

But for a retooling Raptors squad with a strong history of player development, acquiring someone like the 25-year-old Simmons with a high ceiling could be a mutually beneficial move. It’s no secret that head coach Nick Nurse would salivate at the chance to include Simmons as the focal point of his defence.

As for figuring out what the acquisition cost would be: well, it’s anyone’s best guess.

Prior to this year’s NBA draft, the Raptors reportedly balked at an offer for Simmons of Kyle Lowry, Fred VanVleet,  OG Anunoby, and the fourth overall pick that the team eventually used on Scottie Barnes, originally reported by Matt Moore of The Action Network.

It’s clear that Sixers GM Daryl Morey both values Simmons highly and likely sees the potential benefits of moving on. For now, nothing has come to fruition.

“Neither a Timberwolves package nor the Raptors’ proposals have appealed to the 76ers as of yet,” Charania added.