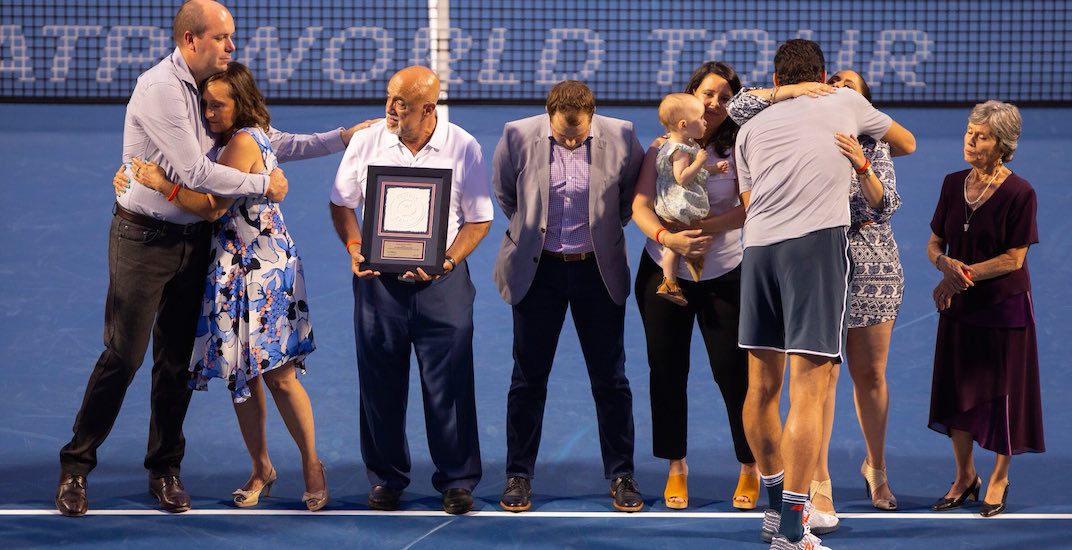 Milos Raonic is best known for his big serve, but on Monday, he showed everyone he has a big heart, too.

Following his opening round, straight-sets win over No. 10 seed David Goffin (6-3, 6-4) at the Rogers Cup in Toronto, Raonic stayed on the court for an emotional ceremony.

The ceremony was in memory of Anne-Marie D’Amico, a 30-year-old woman who was killed in the tragic van attack in April. The Canadian tennis star joined members of Anne-Marie’s family on the court.

It is a privilege to honour the life and legacy of Anne Marie D’Amico tonight. She will always be part of our Rogers Cup family.

Anne-Marie was well connected to Tennis Canada, working at the Rogers Cup since the age of 12. She started out as a ball girl, and was voted Volunteer of the Year in 2016. Most recently she served as a committee head of Stadium Control.

The first official victim of the senseless tragedy in Toronto had a tennis connection, as Anne-Marie D'Amico had volunteered at the Rogers Cup tennis tournament since she was 12.#PlayersBoxhttps://t.co/ga6p3Vx7t1 pic.twitter.com/pjTZhPtaWx

“Our thoughts and prayers are with Anne-Marie’s family and with all those impacted by this tragic event,” said vice president of professional events at Tennis Canada, Gavin Ziv, back in April. “Anne-Marie lived for working at Rogers Cup and seeing her fellow volunteers each summer. The tournament was such a large part of her life and we were so lucky to have her on our team each summer. Her passion for Rogers Cup was contagious and we are honoured to let the world know what an amazing person she was and the great things she did for others.”

Anne-Marie’s mother, father, grandmother, and brother have all been volunteers with Rogers Cup, providing a combined 84 years of service for the event.

For his part, Raonic has set up a scholarship program in conjunction with Tennis Canada and New Balance. An annual scholarship of $2,500 will be awarded to a ball kid in both Toronto and Montreal to be used towards higher education.

“We’ve created this scholarship program that’s a tribute,” Raonic said in an interview with TSN. “In no way does it fix anything, but I think it’s a celebration of their daughter and of a person and of a family that’s done great things for tennis in Canada.”