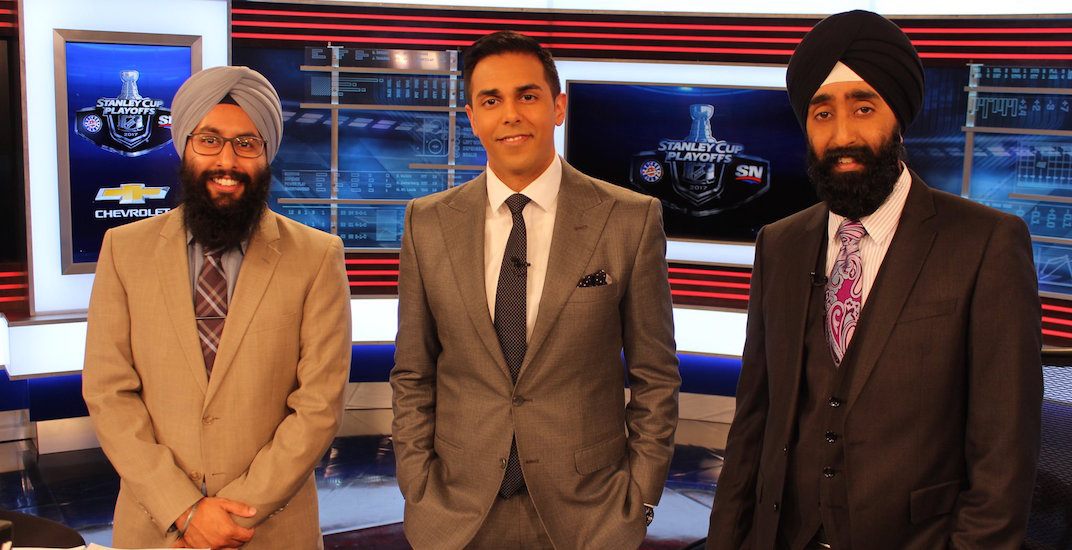 Randip Janda’s rise to prominence on the local sports media scene has been unconventional, to say the least.

A colour commentator and in-studio analyst on television with Hockey Night Punjabi for the past three years, he just got his next big break as host of a sports radio show on Sportsnet 650.

In English, of course.

Janda grew up in Vancouver and has excellent command of both English and Punjabi. He will co-host On Point, a weekday show airing from 1 to 4 pm on Vancouver’s newest all-sports radio station, which debuts on September 4.

“It’s a once in a lifetime opportunity,” Janda told Daily Hive in a phone interview on Wednesday.

“I’m looking forward to bringing my own unique experience. Being from Vancouver, I know I can be an extension of people that live in the city and I think I have my own very unique points of view and thoughts, and I look forward to sharing them.”

Very excited to start a new & exciting chapter with @Sportsnet650! Let's do this @psolkowski & @Doms_Dimes (our producer)! #OnPoint 👊🏾

Janda has English-language experience as a regular contributor on sports radio shows in the United States. He says it gave him the chance to flex his knowledge of the language and sport at the same time.

Janda’s role with Sportsnet 650 was announced as part of the rollout of the station’s new weekday programming lineup.

“We have a first-rate slate of programming for sports fans in Vancouver that will deliver engaging conversation, lively debate, and sports entertainment and content,” said Sportsnet 650 program director Craig MacEwen in a media release. “We are going to hit the ground running and can’t wait to get started.”

MacEwen has chosen a mix of veteran broadcasters to go with some newcomers to sports talk radio in the market.

Janda will be joined by Perry Solkowski, who fans have known for the past 20 years for his work on CTV and TSN.

The worst-kept secret in the city was also revealed on Wednesday, as Satiar Shah has jumped ship from TSN 1040 where he was the producer of the Bro Jake Show, to get the shot at hosting. He’ll co-host The Playbook (airing weekdays, 9 am to noon) with Jawn Jang, who makes his first move into the sports broadcasting world. Jang comes to Sportsnet from 102.7 The PEAK and 93.7 JRfm, where he was an on-air personality.

Shah will also host Canucks Central at Noon, a one-hour show airing from noon to 1 pm. He will be joined by regular contributors from Sportsnet’s in-game TV and radio broadcasts, including Dan Murphy, John Shorthouse, John Garrett, Brendan Batchelor, and Corey Hirsch.

Sportsnet’s morning show will be known as Sportsnet’s Starting Lineup, airing from 5:30 to 9 am, and hosted by James Cybulski, Steve Darling and Mira Laurence

The Program is 650’s afternoon drive show, hosted by Andrew Walker and Scott Rintoul, airing from 4 to 7 pm.

“That’s what I’m really excited about, is getting people that are knowledgeable and folks that represent the community as well,” Janda said about his new colleagues at 650. “That’s a very important aspect that I think is needed.”

The new station will have a lot of work to do to dethrone the current kings of all-sports radio in Vancouver, TSN 1040. Sportsnet is armed with the exclusive broadcasting rights for the Vancouver Canucks though, which will prepare them well for battle.

Sportsnet 650 will broadcast every Canucks game next season, including the Young Stars Classic in Penticton beginning on September 8.

Sportsnet 650 and TSN 1040 have shown their cards. It’s time for listeners to pick the winner.