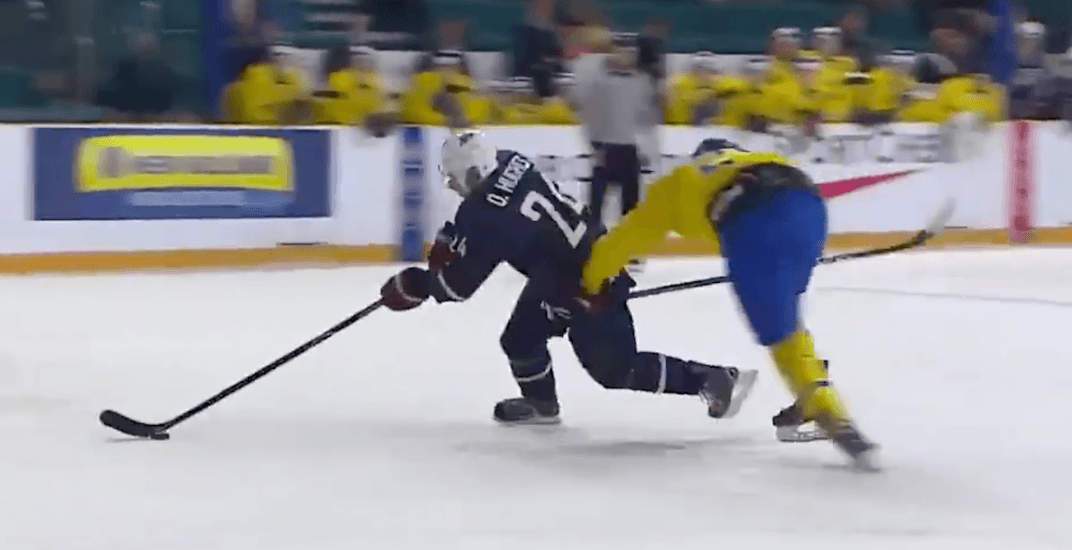 The kid can dangle.

Hockey fans attending the World Junior Showcase in Kamloops were treated to a show from Canucks first-round pick Quinn Hughes on Thursday.

Sure, it’s hockey in August. I know, the arena was mostly empty. But that doesn’t change the fact that this is an early preview of what to expect at the World Juniors in Vancouver and Victoria this December.

And Hughes has got moves.

Watch as Hughes dekes through the first Swedish checker, before pulling the puck around a second player and finding open USA teammate Josh Norris for the game-winning goal with two seconds left in overtime.

With just seconds left in the extra frame, @Canucks 1st-rounder Quinn Hughes sets up Josh Norris (@SanJoseSharks) for the OT winner in @usahockey's 5-4 win over Team Sweden at the #WJCShowcase. pic.twitter.com/mwhzWhuKkH

Hughes had three assists in a 5-4 win for Team USA, showing off his speed, lateral movement, stickhandling, vision multiple times.

His first assist was to his younger brother Jack, who is expected to be picked first overall at the NHL Draft in Vancouver next year.

Quinn Hughes finds brother Jack Hughes to get @usahockey on the board. These two are electric together. #Canucks #WJCShowcase pic.twitter.com/RMlZ9tl4O2

His second helper was even more impressive, as he went for a skate before finding teammate Jason Robertson open in front.

Apart from the assists, he did fun stuff like this:

Quinn Hughes is fantastic at retrieving the puck from behind his own goalline. This little cut back move he makes on his edges allows him to take off and evade the forechecker. Breakout leads to a quality PP scoring chance with brother Jack and Joel Farabee. #Canucks #TSNHockey pic.twitter.com/wKn8CHjUJz

Hughes now has four points in three games in the tournament, having also scored the game-winning goal against Canada on Tuesday.

Quinn and Jack then made Addison pay again, as he turned the puck over behind the net to Jack, who then fed a pinching Quinn that resulted in the GWG. These two know where to go on the ice when they play together. 👀

Hughes, 18, recently announced that he will return to the University of Michigan for another season of NCAA hockey, so Canucks fans will have to watch him from afar for a little while longer.

You get the feeling that Hughes is going to be this year’s version of Elias Pettersson – as a prospect Canucks fans will marvel at through grainy highlights throughout the season.