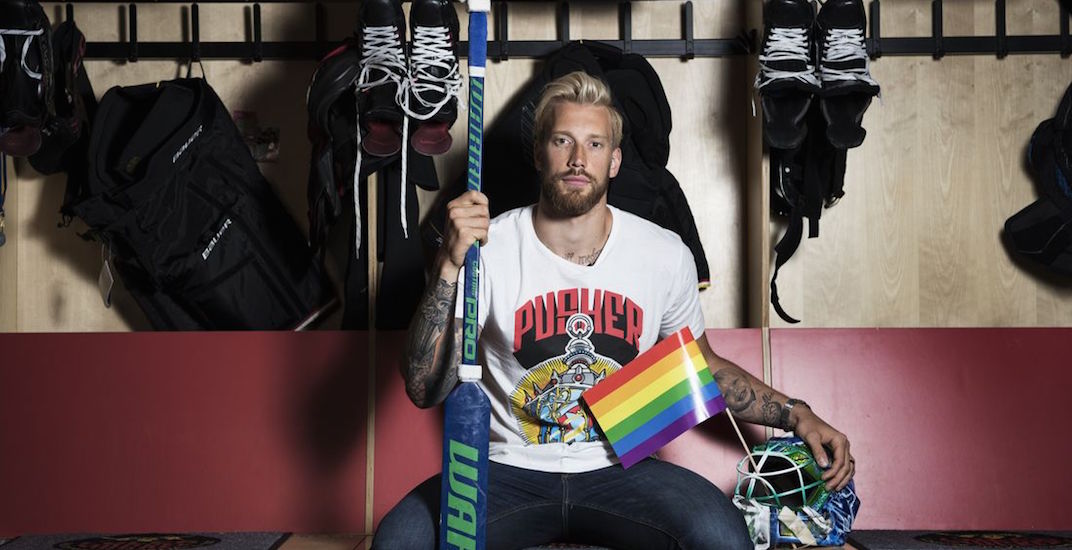 In the rigid, don’t-be-different culture that exists in hockey, Anders Nilsson is willing to make his voice heard.

The Canucks’ backup goaltender, who once dressed up as Spider-Man for his kid’s birthday and uploaded the video to social media, isn’t afraid to be different.

Nilsson is an active voice in support of LGBTQ rights. He has a rainbow Pride flag painted on the back of his goalie mask and was named ‘Hetero of the Year’ by an LGBTQ awards show in Sweden in February.

“For me, it is really important to be a good role model and show that hockey is for everyone. Especially when it comes to kids and teenagers,” Nilsson said after winning the award. “Everyone should feel welcomed to play hockey, no matter your sexual orientation, religion, or race.”

There aren’t many professional hockey players that are willing and able tackle this topic like this in the NHL – a league that’s still waiting to welcome its first openly-gay player.

“I have friends who are gay in both Sweden and the United States, and some do not even dare to tell their families,” Nilsson said (thanks Google Translate), explaining why he first put a rainbow flag on the back of his goalie mask while a member of the Buffalo Sabres.

“I did not really understand before how much you do can mean to someone else. But what you can do as a professional ice hockey player is so important. I hope more people can understand it.”

Nilsson acknowledged that the Pride flag is just a small step. Hockey culture has a long way to go.

“It is the culture that is toughest,” he said.

“It is said that there should be 3-4 players on every team are homosexuals… but no, definitely not. They have stopped when they were children. They have not dared to continue playing.”

When homophobic slurs are normalized in hockey dressing rooms, it has a way of discouraging gay players from playing the sport, he says.

“If I had been gay, I would have quit hockey when I was a teenager.”

Nilsson spoke about the need to “fit in” in team sports.

“They are scared. No one dares take the step because they are afraid to stand out and lose friends in their team or to look different to them. Community needs in male sports are very strong. Everyone does as the others do.”

Hockey culture, more than most other sports, is defined by conforming. Be humble, be unselfish, don’t say anything to make you stand out from the rest of the group.

“What’s happening is that we will not get a gay player, and it may be next Sidney Crosby or Connor McDavid or Wayne Gretzky, we do not know.”

The attitude needs to change at the grassroots level, Nilsson said.

In a video posted to the website, Nilsson was even bolder in his stance, acknowledging the problem and encouraging people to take responsibility.

It’s said that no homosexual would survive in a hockey locker room. I believe it’s true.

I’ve heard so much shit, jokes, and idiotic comments.

Macho culture in a locker room is very tough, especially for young boys.

A lot tougher than for us professional hockey players.

If you’re different, you will hear it. If you stick out in the wrong way, you’ll get teased.

Young boys are too afraid to be themselves.

Some are too afraid to even begin to play hockey. Others stop prematurely.

We’re convincing young kids that no homosexual can play hockey. In Sweden. 2018.

We don’t only lose good hockey players, we lose the pride in hockey.

For every young boy who’s afraid to come out is one loss too many.

Because this isn’t just about your brother, your friend, your father or your son.

This is about the entire hockey’s future and how we want that future to be.

This shit is over now, it should be over a long time ago.

I belong in hockey.

You belong in hockey.

Get dressed, come out.