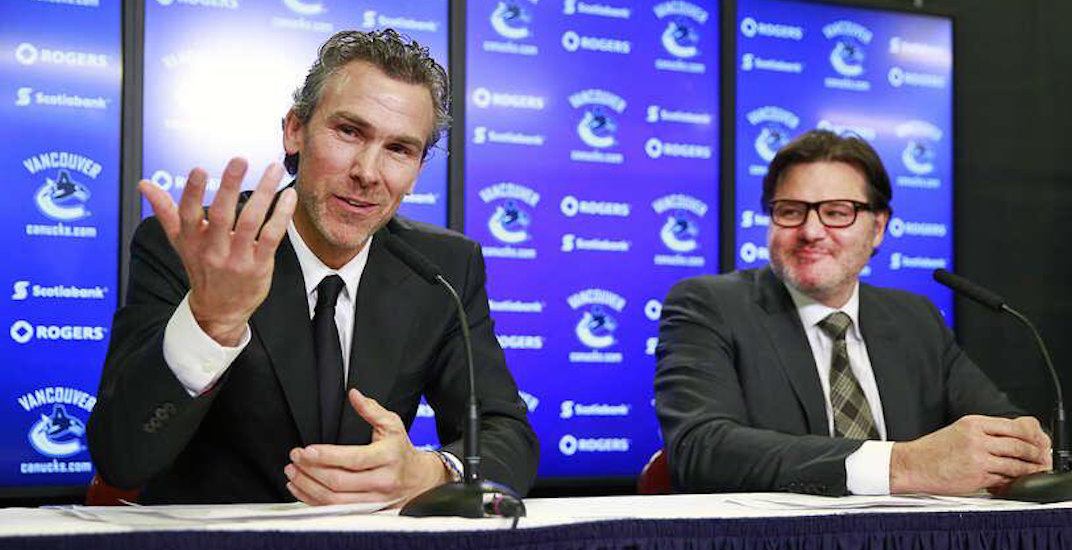 That old saying might apply to the Trevor Linden saga, which is still dominating discussion among fans and media one week after he split from the Vancouver Canucks.

Officially, Linden and the team “amicably” parted ways. And if you choose to take that at face value, you’re welcome to.

But for the rest of us, it sure seems like there’s more to this story.

While the news caught everyone off-guard, reports from many different directions suggested that there were rifts within Canucks management.

The strongest words came out of Toronto, from longtime sports reporter Steve Simmons.

“Trevor Linden did not amicably agree to leave the presidency of the Vancouver Canucks,” Simmons wrote in Sunday’s edition of the Toronto Sun. “He was, for lack of a better word, fired by owner Francesco Aquilini.”

Simmons dropped this bombshell in just 224 words, as it appeared in a notes column that covered numerous topics. On Tuesday, he expanded on his claims in an interview with TSN 1040’s Matt Sekeres and Blake Price.

“This isn’t the kind of story I would be chasing,” Simmons said, adding that the scoop came to him from people in the NHL that knew the situation very well. Since the story was published, Simmons says more “NHL people” have reached out to him to let him know he got the facts right.

“I am led to believe that Jim Benning and John Weisbrod, for lack of a better word, stabbed Trevor Linden in the back,” Simmons said.

This would help to explain confusion with what the Canucks did on July 1, signing three veteran free agents, after Linden said the team would be “extremely young” next season.

This all paints a different picture than what Aquilini and Linden told fans last week.

In a series of 12 tweets, Aquilini said that Linden “stepped down,” later clarifying that he misspoke (mistweeted?).

A further note on Trevor Linden today. I misspoke when I said he "stepped down" and it's been pointed out to me that that made it sound like he's a quitter. He's never been a quitter, on or off the ice. We parted ways amicably and I wish him only the best.

“A rebuild is a long, slow, gradual process,” Aquilini tweeted. “Everybody needs to be united behind the same vision and pulling in the same direction.”

That last line raised eyebrows, as it seemed to suggest not everyone was behind the same vision.

In a statement addressed to fans, Linden said only that he was “leaving” his role.

“From ownership to hockey and business operations, the club is as strong as it’s been in years,” said Linden, calming the waters, though it’s been pointed out that he did not mention anyone by name.

Though Aquilini doesn’t do a lot of media appearances, it was strange that Linden left the organization by way of a late-afternoon press release rather than a press conference. The Canucks owner, and Linden, have not communicated with fans or media outside of prepared statements on the team’s website or Twitter.

So we’re left to wonder.

Given Linden’s stature in the city, it appeared to many that ownership hired someone they could not fire back in 2014. Removing him from the organization – whether deserved or not – would always have to be handled delicately.

So what’s the truth? It depends who you ask.