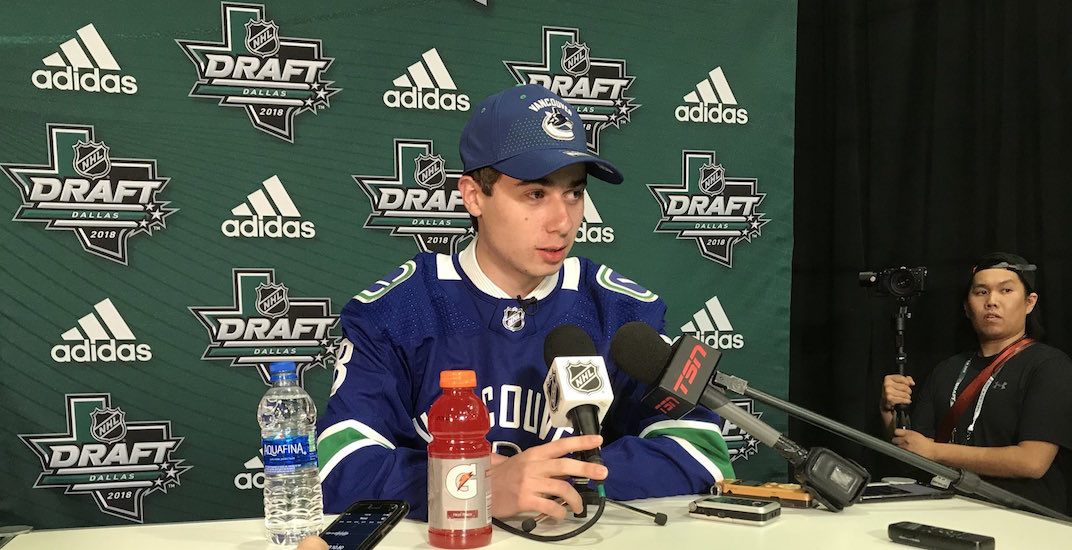 Should he stay or should he go?

That question has been on the mind of 18-year-old defenceman Quinn Hughes, as well as the minds of Canucks management and fans ever since he was drafted seventh overall at the draft last month.

On Saturday, Hughes made his decision, announcing that he will return to the University of Michigan for his sophomore season.

“There were positives and negatives both ways and, honestly, you can go back and forth all day,” Hughes told University of Michigan reporter Steve Kornacki. “That’s what I’ve been doing for the last month. And I’d been thinking about this a lot over the last couple weeks, especially with contract talks heating up.”

Hughes, who sounded like a player that was eager to step into the NHL right away at development camp earlier this month, spoke about unfinished business with Michigan, who he helped reach the national championship semi-final last season.

By staying in the NCAA, Hughes will limit his chance at injury and increase his odds at having successful season filled with goals, assists, and wins. He scored 29 points (5-24-29) as a freshman last season.

It also ensures that he’ll be available for the World Juniors in Vancouver this December.

“The Canucks had a big part in this decision, and I think they’re happy with this decision, too. They agree with it. With everyone I spoke with, this made the most sense.”

“We are in full support of Quinn’s decision to continue his university career as he further develops as a hockey player and student,” said Canucks GM Jim Benning. He now has an opportunity to be a leader at the University of Michigan and represent Team USA at the 2019 World Junior Championship in Vancouver. These are once-in-a-lifetime experiences that will only benefit Quinn’s future career.”

Given that he already looked comfortable playing against NHL players at the IIHF World Championships last May, you can make the case that Hughes is already ready for the NHL. But the truth is, nobody really knows.

Hughes might have stepped into a top-four defenceman spot right away, but it wasn’t out of the realm of possibility that he would have been used in a depth role, or even been sent to Utica, if he struggled.

“They are thinking big picture and really want what’s best for me,” Hughes added. “I think they handled the situation great, and there was always communication there. They were thinking four, six, 10 years down road: ‘What’s best for Quinn Hughes?’ They’re happy with the decision, and I am, too. My family advisor, Pat Brisson, has been talking to Jim Benning for probably three, four weeks. I talked to Jim and the coach, Travis Green, as well.”

Listed at 5-foot-10 and 170 pounds, Hughes will take this opportunity to get stronger before making his NHL debut, which could come late next season. Like Brock Boeser and Adam Gaudette before him, expect Hughes to play games with the Canucks after his college season ends, if possible. There’s a possibility that Michigan’s season goes longer than Vancouver’s, given that the Frozen Four begins on April 11, five days after the Canucks’ final regular season game.