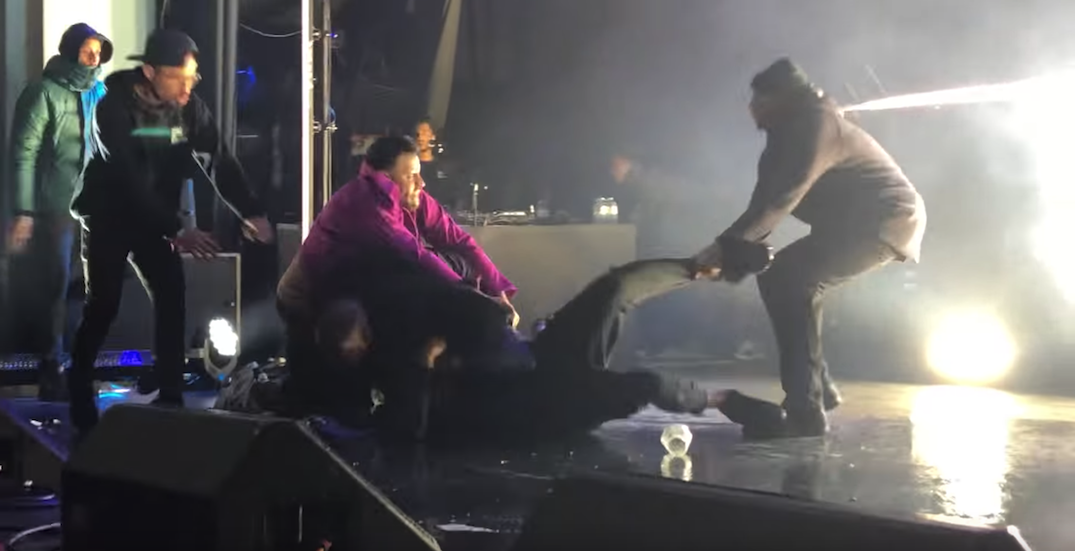 One person is in critical condition and 5 others were injured on Tuesday night after a fight broke out on stage at Pusha T’s Toronto concert.

The show, which was at the Danforth Music Hall, was interrupted about 30 minutes in as some people in the crowd began spraying Pusha T with water (or beer).

The incident was captured on video and shared on social media, and it shows security going into the crowd at one point. The video then shows several people on stage as a fight takes place, although Pusha T is not seen and is not one of the people involved in the brawl.

Assault: Danforth Ave / Broadview Ave
– numerous ppl injured from a fight inside a concert hall in the area
– performers attacked by a group of ppl
-EMS/Police on scene
-closures: Broadview/Danforth to Playter Blvd#GO2140689
^ka

Police were called and were on the scene soon after, and closed the intersection of Broadview and Danforth to Playter Blvd as they investigated.

According to Toronto Police, when officers arrived on the scene, 5 people were injured and some did not seek paramedic assistance. Two were taken to hospital with non-life threatening injuries.

Following the show, one injured individual went into a hospital with stab wounds, and police say after investigating they determined the injured was also involved in the brawl earlier in the evening.

The stab wound victim is in critical condition, according to police.

Meanwhile, at the Danforth Music Hall, the show did go on.

Several minutes after the fight, Pusha T came back on stage to perform one more song ‘Infrared’, before ending the show early. Infrared is a known Drake diss track, which is part of the Drake and Pusha beef.

Pusha T is allegedly the rapper who spilled the news on Drake having a child.

Following the news that Pusha was “attacked” in Drake’s hometown, social media blew up with accusations of Drake’s involvement in the evening’s events. Pusha himself implies at the 7:42 mark of the video that someone (aka Drake) paid people to throw the beer.

So far, there is no word from Drake’s camp.

THE AFTERMATH OF PUSHA T IN TORONTO THANKS TO DRAKE 🤦🏾‍♂️ pic.twitter.com/OMLq3TN1EH